HP ENVY 15 Hands on and unboxing

The ENVY series of laptops has defined HP’s high end for the last few years, and the trend continues with the newly remodeled ENVY 15. The high-powered series has become popular in the PC crowd thanks to lower and lower prices for some very respectable hardware. The last time we took a look at the ENVY series was the ENVY 17 3D nearly a year ago, and it left us quite impressed. HP sent over the ENVY 15 for us to check out, and initial observations are promising.

The first thing you’ll notice when handling the ENVY 15 is its heft: a largely metal construction makes for a big, heavy unit, even for the relatively mainstream 15-inch screen size. That weight isn’t wasted, however. The premium feel of the ENVY line is present in full force, with minimal seams and laser etching everywhere. The front of the laptop is bare, save for stereo Beats speakers. On the right you’ll find the SD card slot, Kensington lock port, a single USB port, Display Port, full-sized HDMI, a stylish Beats manual analog volume controller, an Ethernet port and the power jack. Switch to the left side and you get the optical drive, two more USB ports, a pair of headphone ports and a microphone in jack.

Lift the matte black lid and you’re greeted with the standard ENVY interior, plus a few surprises. The keyboard steps inside the body via a stylish red ring that matches the Beats audio dial, a nice tough that adds just enough flair to set it apart from the Macbook line (which, let’s face it, early ENVY models aped pretty shamelessly.) Black backlit chicklet keys are comfortable, if not as springy as the ones found on Lenovo’s ThinkPads. The power button, volume dial and a mute switch are the only extra controls on the unit. 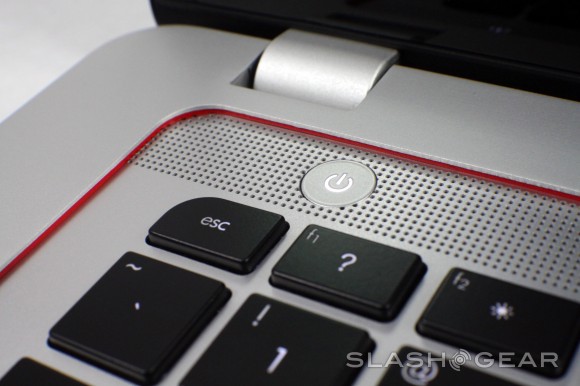 The screen is gorgeous, thanks to both HP’s Radiance LED display. A full 1920×1080 resolution is a treat on a 15-inch panel, though the standard base model has only the more common 1366×768 resolution. A relatively thin bezel combined with edge-to-edge plastic (not glass) makes for a well-defined if glossy viewing experience. Flip the laptop over and you’ll see minimum legalese and just one access point for the battery, which HP figures good for 9 hours. The body is considerably thicker than the same-sized Macbook Pro, but not to an extreme degree.

Previous ENVY models had trouble with the Apple-style clickable touchpad. For the most part these seem to be resolved, thanks in part to a small rubber strip that give a separation of the main navigation area and the “buttons”. Two-finger scrolling is unfortunately still iffy – I’ve yet to see a PC notebook that nails the multitouch gestures as well as a Macbook. More’s the pity. The analog volume dial emblazoned with the Beats logo is a nice touch, and allows for quick, tactile changes in sound. 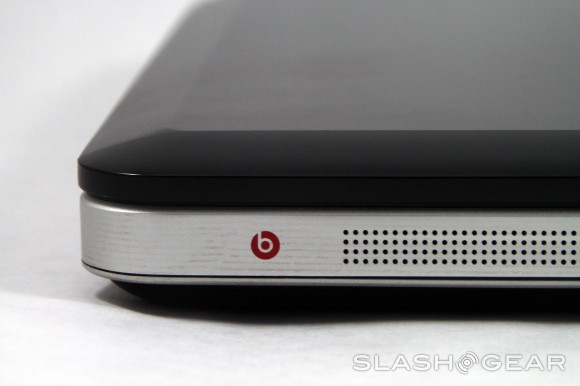 Our ENVY 15 came with Windows 7 Home Premium, in the 64-bit flavor to take advantage of 6GB of DDR3 RAM. Combined with a 2.4Ghz Intel Core i5 processor, a speedy traditional 500GB 7200 RPM hard drive and a 1GB AMD Radeon 7690M, this laptop should fly through high-end applications and the latest games – we’ll be sure to put it through its paces. Looking through the included software, I’m happy to see full versions of Adobe Photoshop Elements 9 and Premiere Elements 9, useful tools for any would-be media dabbler. I’m less pleased to see the predictable inclusion of Microsoft Office trial versions, as well as HP and Bing-branded bloatware. It’s by no means the worst that I’ve seen, but a clean Windows experience is always preferable. There are no OS discs included in the package to allow for manual re-installation.

As for the packaging itself, it’s the high-quality stuff we’ve seen on previous ENVY models. The laptop itself gets a free cloth baggie/shammy (necessary, considering how fast that black top accrues fingerprints) and another baggie for the large 3-prong AC adapter. The standard documentation and a few marketing flyers round out the extras. As configure this ENVY 15 would cost $1249, with the base model starting at $1099.

Take a look for yourself in our unboxing video below:

We’ll be going over the HP ENVY 15 for our in-depth review later this week.