Welcome to a review of the biggest fattest HP 3D desktop replacement notebook you’ll ever come across. Not that it’s the biggest that’ll ever be made, but when you’ve got this thing sitting on your desk, you’ll wonder how you ever got along without such an abundance of screen real-estate on what the world, up until recently, was calling a laptop computer. This is the HP ENVY 17 3D, and not only does it have full 3D capabilities and a width bigger than your humble narrator’s torso, it’s got a screen so bright it makes the real world seem yellow.

This gigantic HP ENVY 17 3D review unit is a fabulously large at 16.38″(W) x 10.83″ (D) x1.25″ (min height) / 1.52″ (max height). It weighs in at 7.37 lbs – more than you’ll want to be carrying around in your packpack, if you know what I’m talking about (unless of course you’d like to bring it to a LAN and impress your comrades of course, then weight is never an issue.) I wouldn’t expect a 17.3″ notebook to be any less heavy than this, but hey, we’re in an age where a MacBook Air can be so small and thing that it gets thrown away with the mail on accident, so what do I know? 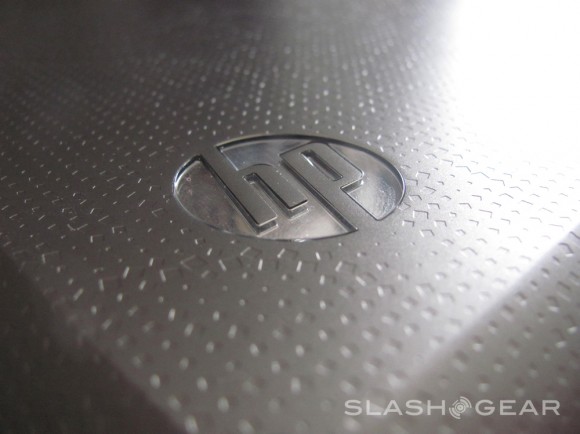 The casing on this machine is nothing but lovely and beautiful brushed aluminum in carbon relic. Aesthetically it’s totally lovely with a random dot pattern across the wrist area below the keyboard as well as across the top of the case, with a light-up HP in a circle in the lower left (when it’s stood up open.) There’s a generous amount of space (about an inch) of smooth depressed space around the keyboard inside with a full-sized keyboard plus number pad in black with white printing keys that are all back-lit. There’s a singular metal power button in the upper left above the keyboard, and a gigantic 4.2 x 2.5″ trackpad with some questionable clickability. 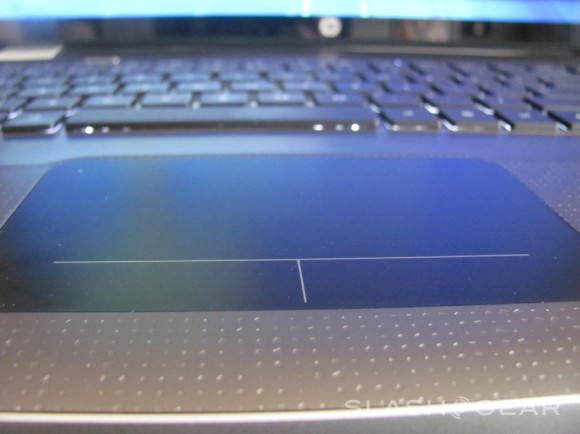 The trackpad on this machine isn’t questionable in the way that’s difficult to work, but in the way that, if you’ve never used this kind of extremely sensitive pad before, will take some getting used to. Even after a week of working with the pad (being used to a more traditional sensitivity pad) I found it much more natural to take out the ol’ mouse and connect it via USB. The pad can be clicked (right and left) and can be tapped in a way similar to a button. Because both of these can happen at the same time, lots of mistaken clicks were made. I can imagine that once you’re extremely used to this system, however, you might find it super helpful to be able to click without the extra physical depression of the pad – hello easy gaming click? Lots of mistakes made but neat after learning.

Inside you’ll find a 1.60GHz Intel Core i7-720QM processor with 5.94 GB RAM and a 640GB 7200RPM Hard Drive. Graphics are handled by a 1GB ATI Mobility Radeon(TM) HD 5850 graphics card. This card powers the massive 17.3″ diagonal Full HD HP 3D Ultra BrightView Infinity LED Display (1920×1080). Viewing angles are basically perfect at all angles except starting at about 20% below the screen. But heck, unless you’ve got the thing sitting at the top of a staircase and you plan on sitting at the bottom, you probably wont need to worry about this. The screen doesn’t do much for reducing glare, so that’s an issue if you’re using this machine as your television (which I hear a lot of people do these days [like my wife and I,]) but keep it away from windows and bright lights and you’ll be fine. 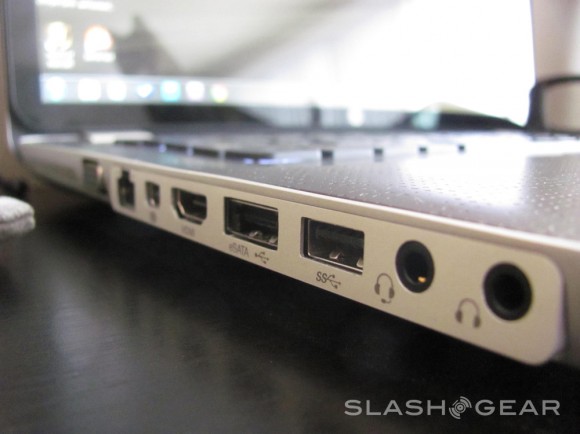 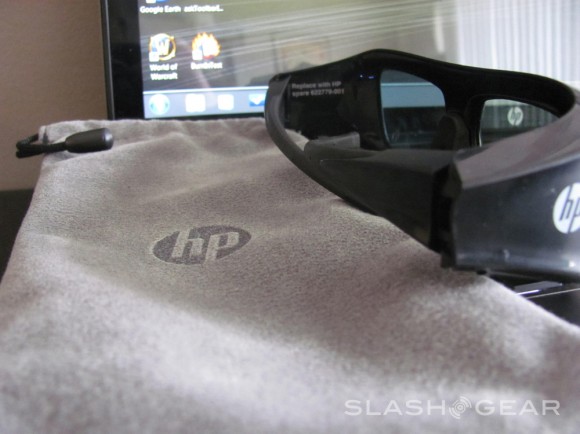 In the box you’ll also find a pair of super hot gigantic ugly pair of HP 3D Active Shutter Glasses that employ the use of the, again, Full HD HP 3D Ultra BrightView Infinity LED Display. These come in a whole separate box and drawstring storage pouch so you know they’re trying (with success) to make you feel like they’ve put some effort into this 3D experience. There are several nosepads included and the glasses themselves are substantial to be sure.

For a video of a hands-on with this machine as well as LOTS of pics of everything that’s in the box, head over to the HP ENVY 17 3D Laptop Hands-On and Unboxing post from when we first received the package.

This computer is made for business and entertainment. It’s classified as a business machine, but with big pushes on both the Beats audio and the 3D capability, we know better – this machine is made to bring you the visuals and the audio. Does this mean it’s going to deliver the sweetness to gamers as well as everyday 3D Blu-Ray disk watchers? Lets let the numbers speak for themselves. First we’ll have a look at benchmarking with Geekbench, a synthetic test of memory and processor performance. The ENVY 17 3D totaled up a score of 4450, surprising considering the scores of similar machines: Acer Aspire 5745DG-3855 at 4814, Gateway ID49C at 5042, and even the smaller HP ENVY 14 at 4830.

The ENVY 17 3D scored 26.94fps in OpenGL and 2.78pts in CPU. Unfortunately Cinebench was unable to complete the task, so no results there. As far as performance goes with everyday functions like opening tabs, playing video with audio, playing video and audio at the same time (on accident,) opening new games and old (Diablo 2 Lord of Destruction, just for fun,) everything went super smooth. No delays basically anywhere. 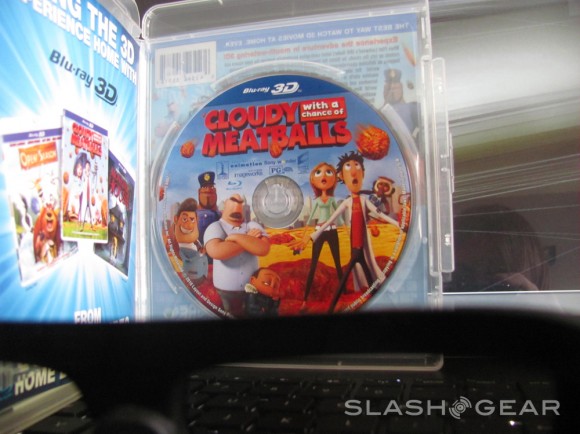 With the test package we’re working with here, we received a test copy of the 3D Blu-Ray disk Cloudy with a Chance of Meatballs. It looks, plays, and feels fantastic. While I personally am still not convinced that 3D is the way of the future as far as personal computers goes, having 3D capability in my home, right here in front of me, is fun and impressive. As far as how the 3D looks compared to say… the movie theater? It’s better here. While the movie theater for me ends up going to the back of my mind basically right away (or giving me a headache because I don’t know what to focus on at any given point,) the 3D setup this ENVY 17 3D machine uses is top-notch. When I move my head from left to right to left, the objects on the screen move with me. They don’t react in exactly the same way they would if I were actually looking at objects in real life, but it’s close, and it’s awesome. 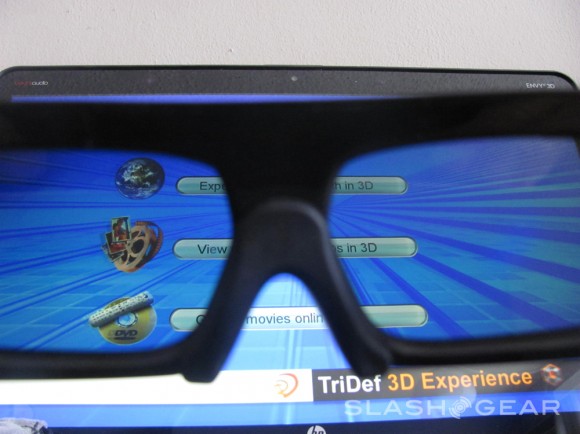 Games that work with 3D via the ENVY 17 3D’s ATI active shutter technology (Call of Duty 4, Call of Duty: World at War, Fear 2, Left 4 Dead 2, Mirror’s Edge, Resident Evil 5, World of Warcraft,) do not just instantly pop on. To enable the 3D tech for games, you’ve got to use the TriDef ignition application. You have to do this each time to open a 3D game. Once you’ve got your games open, however, it’s smooth sailing. Obviously playing games in 3D is going to put more pressure on your GPU than 2D games since two frames are needed where before there was only one, but it doesn’t seem to matter all that much here. NOTE that I’m always hesitant to say how well games play on computers I personally am reviewing since it’s almost certain that you, being a person who plays games on your computer in addition to doing other things during the day, wont be working with a fresh out of the box version of this machine, and should therefor take the word on performance with a grain of rice since everyone’s experience is unique. Trust the numbers! 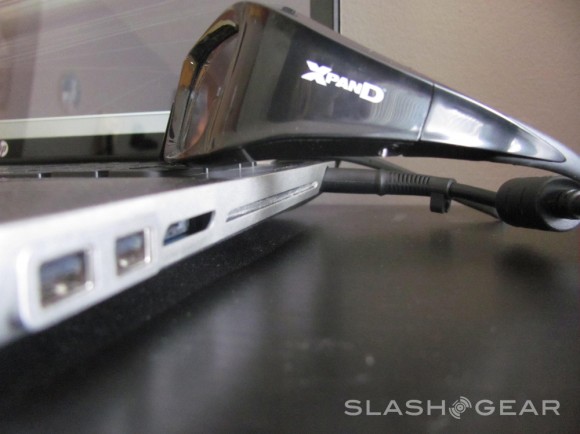 Keep your power cord handy. This machine lasts right around 2 hours without it, and that’s only playing movies. If you plan on bringing this gigantic honker to a friends house to play some games or watch some 3D / HD action movies, bring the cord, just to be safe. Two hours isn’t long, but I really REALLY don’t think HP meant to sell this machine with battery life as a point of sale. It’s a desktop replacement after all, and how many desktops do you know that sit around without the power cord plugged?

The display is bright, the display is sharp, and the display is HUGE. This is a desktop replacement without a doubt, and you’ll never go back to a tower again if this monster is slid under your nose (that’s a bit presumptuous, I know you love building your own machines and enclosures and all that, but this is a really really tasty alternative to DIY.) You will NOT be let down by the display – in fact, as mentioned earlier on, you’ll be more let down by the colors you see in the rest of the world when you look away from the screen as they’ll appear yellowed before your eyes re-adjust.

The mousepad. It’s really difficult to get used to. If you plan on using this machine without a mouse, consider testing a pad like this out, because I’ve never experienced one like it and it can get very annoying very fast. If you HAVE tested one before and have taken a liking to it, I imagine it can become quite handy in many places. Every time I switched back to another CPU after using this, I found myself tapping my pad expecting folders and icons to open. Imagine that.

Performance seemed great all around, nothing seemed to lag or chop. Trust the numbers first, trust me second: this machine flies fast, this machine works well. As with any machine, if you bog it down with crap-ware and rip it apart with a million trillion tasks, it’ll fail like any other – if you’re smart, this machine can work wonders for you.

The machine can get hot, especially along the left side of the keyboard where the fan blows out hot air. If you’re understanding of machine heat, it doesn’t seem like it will be a giant problem. If you’re used to your machine staying cool all the time, no matter what, think twice before expecting this one to do the same. It gets hot. It does. 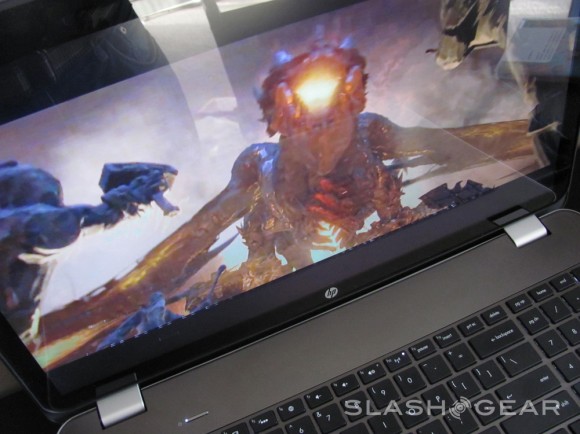 The HP ENVY 17 3D is built for entertainment. If you plan on needing a cpu for business only, get a smaller machine, and one without 3D capabilities. If you want to watch spectacular graphics flash before your eyes on a titanic notebook, this is the monster for you. I’m not entirely convinced that the world is ready for 3D games, but it’s sure ready for movies, and when (if ever) the 3D gaming world catches up with reality, this ENVY will be ready. Bottom line is that if you’ve got entertainment in mind and you’d like it in a desktop-replacement notebook package, this is the one for you.

Gorgeousness inside and out.