How the Pokemon GO CP increase update rebalances the game

Pokemon Go power is up across the world today as Niantic announces Pokemon CP increase is not a glitch. What Niantic suggests, instead, is that they’ve done work in balancing Pokemon against one another. Niantic is attempting to make sure the game is fair for all users as our first Thanksgiving event approaches. This means users that aren’t next to a water source where they can catch Magikarp, for example.

A guide has been crowd-sourced this afternoon showing which Pokemon have had their CP changed. This guide, which SlashGear has gathered from several helpful users, shows some monsters up and others down. Those users playing a large amount during Halloween should be happy: Gengar is amongst those with the biggest boost.

UPDATE: Special thanks to the crew at TheSilphRoad for organizational help this afternoon. The Pokemon you see in this chart should be increased or decreased in power level according to the chart. It’s not an exact science, but it’s generally reliable. Niantic has only suggested changes to three Pokemon, while it’s clear that almost every monster has changed at least a little bit. 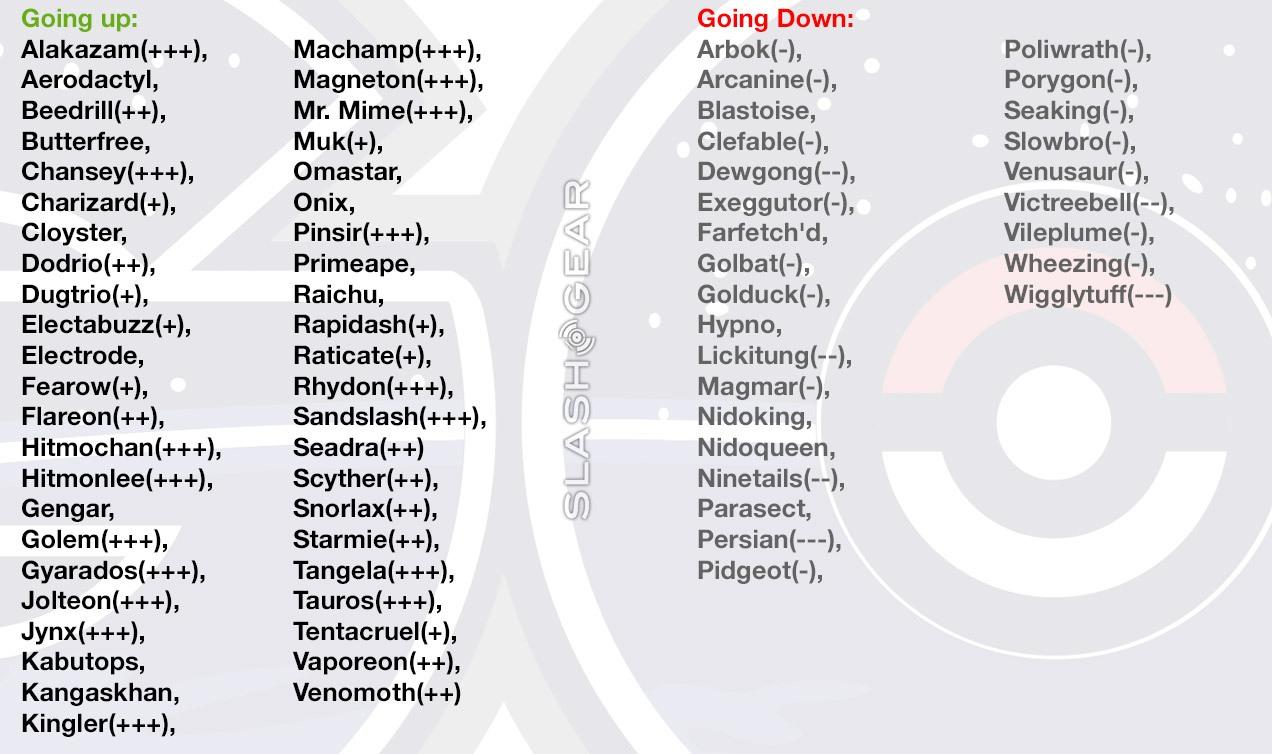 Those with Pokemon GO accounts that’ve recently used a lot of stardust may be displeased. This update gives a CP boost to Pokemon such as Alakazam, Rhydon, and Gengar. This does not necessarily mean Niantic has erased all trainer’s hard work, however.

SEE THANKSGIVING: all the details on Pokemon GO’s event this week

While some Pokemon have had their CP increased, potential has also increased. Some Pokemon have been nerfed, as well – no longer will Exeggcute dominate the gyms in our neighborhood! Same goes for Victreebel, a notoriously overpowered Pokemon.

Unbelievably it would seem that Niantic has also seen fit to increase the power of all Eevee evolutions. This includes a Pokemon that’d been nerfed in the past: Vaporeon. While this Pokemon continues to dominate gyms all around the world, it was apparently not quite strong enough for Niantic.

What’s more, Eevee will have two additional evolutions once the 2nd-gen update is released. These two new Pokemon will almost certainly be too powerful to keep at their release levels. As such, we recommend capturing as many Eevee as possible now, in the month or two before the Generation 2 update. That way we’ll be ready to roll when it’s time to evolve.