Think of smart home thermostats and you probably think of Nest, but HVAC stalwart Honeywell wants to change all that with its WiFi Smart Thermostat with voice control. The touchscreen heating and air conditioning control unit not only allows you to fiddle with your settings with a fingertip, but call out instructions not only from up close but from across the room and, potentially, elsewhere in the house. We stopped by to pretend we were talking to the computer out of Star Trek; head on past the cut for some early impressions.

Honeywell has had touchscreen thermostats for some time now, making things like multi-day programming more straightforward than the traditional combination of switches, LCD-segment displays, and cryptic abbreviations that send you running to the user guide. It’s also been experimenting with cloud-control, allowing for remotely setting the temperature from a phone or tablet.

What the Smart Thermostat adds is the ability to adjust things hands-free. It’s not full control of every setting via spoken command – you’ll still have to get up close and hands-on to do things like change regular on/off times – but it gives easy access to the basics.

You trigger the system by saying “Hello thermostat” and, after that, have a choice of commands. They range from the basic – “make it warmer” for instance – to the specific – like “decrease the temperature by five degrees” – as well as more natural language instructions. Saying “Help” calls up a list of supported commands on-screen.

Honeywell had the demo unit rigged up with a wired microphone – the area we were testing with had large amounts of background noise – but the company is actually pretty proud of how the Smart Thermostat’s integrated microphone works. Rather than demanding you get up-close, it can supposedly hear you even if you’re out of the room. Once you give the command there’s a couple of seconds of processing, as your speech is pushed up to the cloud, run through the recognition system, and then the instructions sent back down. 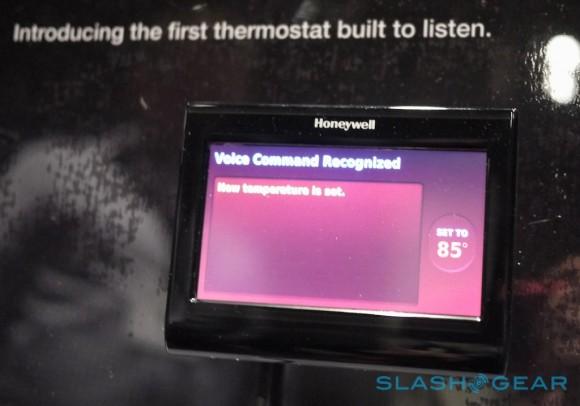 Right now, the functionality is pretty basic, but because Honeywell is doing the processing remotely that can change without the user even realizing it. The company can add new commands – one example could be “I’m leaving” when you want to shut the aircon down as you leave the house, or perhaps requesting that the heat be turned up for a short period, like an hour – and push out the relevant firmware direct to the Smart Thermostat with no owner-intervention, though Honeywell told us that it would flag up any additional features in the iPad and iPhone app as well as through the on-screen dialog on the device itself.

In practice, if you’re expecting Siri levels of interaction you may be disappointed. There’s noticeable lag between giving a command and having it acted upon, as the server-side processing does its work, though you could argue that it’s not like anything you’re doing with your thermostat is especially time-critical. What we do like is the hands-free convenience, though the true value of being able to bypass buttons and switches and set your HVAC up by voice will only really be achieved when you can establish full programs by speech alone.

Honeywell has the WiFi Smart Thermostat with voice control up for preorder now, priced at $349. It’ll begin shipping from October 28.