It’s been a long while since we first saw Honda’s exoskeleton-like Walking Assist Device – 2008, in fact – but the first 100 units are finally strolling into broader service in Japan. 100 of the 2.6kg gadgets, which strap onto the legs and hips so as to help the wearer walk more steadily and with a longer stride, have been deployed as part of a loan program across Japanese hospitals.

Honda suggests the gadget can be useful for both indoor or outdoor walking, though it cautions against using the walker in the rain and on non-flat surfaces. So far, it’s been trialled on a small scale in seven different hospitals, where physiotherapists and doctors have apparently given the system a tentative thumbs-up. 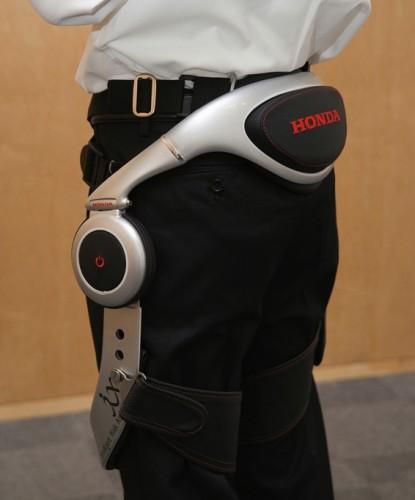 Although it lacks the immediate geek-appeal of Honda’s ASIMO robot, the Walking Assist Device shares a big part of the robot’s intelligence. Both are based on the company’s studies into walking styles; in the case of the exoskeleton, a bevy of sensors are used to track hip-angles, and thus make sure the motors kick in as appropriate to help guide each step.

It’s not Honda’s only unusual transportation system we’ve seen over the past few years. Although the company is best known for its cars, it also keeps plugging away at more personal methods of getting around, including oddball designs like the UNI-CUB unicycle and the moto compo folding scooter.