Honda’s compact electric vehicle prototype already had us eager for Geneva based on the exterior preview, but a cabin teaser has us even more excited – and curious to see how the automaker’s production cars might evolve in the not-too-distant future. The city EV is the latest iteration of the Urban EV Concept, which stole the show at the 2017 Frankfurt Motor Show.

Then, the concept car was a thinly-disguised preview of the electric vehicle Honda had in mind for urbanites wanting zero-emission transport. This new compact electric vehicle prototype nudges us even closer to the eventual production car.

On the outside, as we saw last month, things have moved on somewhat from the original concept. The fascia of the EV is a little less aggressive, though equally retro, while the curves have added detailing. Where we’ve been expecting the biggest changes, though, are inside.

The original Urban EV Concept had just the sort of dashboard that you’d expect from a show car. Huge, cabin-spanning display, more screens integrated into the door panels, and minimal physical controls. The steering wheel was a squared-circle with a single spoke, complete with an illuminated Honda badge.

Great for a splashy show stand, but not so practical for production. Now, with a new dashboard image to tease the updated compact electric vehicle prototype ahead of the Geneva Motor Show 2019 where it will make its debut, Honda has revealed a cabin that you could much more readily envisage in a dealership.

“The interior is designed to create a warm and engaging atmosphere inspired by the Urban EV Concept launched at 2017 Frankfurt Motor Show,” Honda says. “The driver interface shown in the image features a full-width dashboard with clean design elements and intuitive user focused technology.”

Certainly there are parallels with the original concept. A super-wide display occupies pretty much the whole of the dash-top, but it has been combined with a much more traditional steering wheel that looks like it has been pulled from an existing vehicle. A few shortcut buttons run across the central wooden strip, along with a physical volume dial – which we’re always pleased to see. 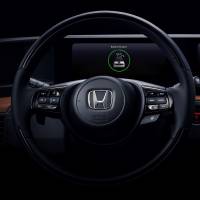 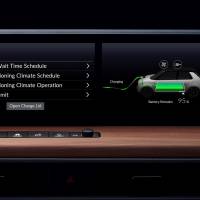 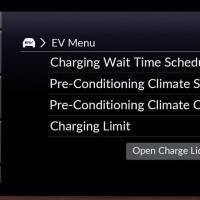 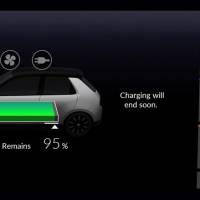 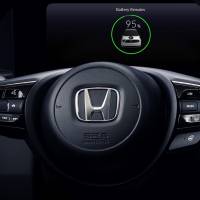 Arguably more interesting, however, is the interface that wide-aspect screen shows. It’s a new evolution on the Honda Display Audio UX we’ve seen in current production cars, with greater use of the tile interface. One pane, closest to the steering wheel in the center stack, is dedicated to multimedia, navigation, and other section shortcuts. At the other extreme, there are keys for audio selections and other apps.

In the middle, meanwhile, Honda shows the EV’s power management. That includes the various settings for timed charging and preconditioning, but also confirms that – unlike the original Urban EV Concept – this new car will be a five-door hatchback.

For anything else, we’ll have to wait until Geneva, though with the show kicking off on March 5 that’s not too far away. What we’re most curious about is whether this is the interior that Honda has earmarked for the production version of the electric car, which could arrive in dealerships as soon as the end of the year.