HMD has rolled out a couple new feature phones wearing the Nokia name that aim to be very cheap but offer quality. These have no smart features in them, but that is to be expected when the Nokia 150 has a retail price of $26 before taxes and any local subsidies. These new devices come just weeks after HMD landed as the new home of Nokia phones.

Both of the devices feature durable polycarbonate shells with scratch resistant color. Both the Nokia 150 and the Nokia 150 Dual SIM have integrated FM tuners and MP3 players. The screen on both measures 2.4-inches and has 240 x 320 resolution, tiny by smartphone standards but not bad for a feature phone. The OS is Nokia Series 30+ and Nokia says that it is easy to use. 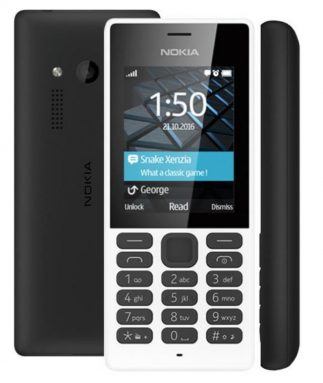 Long battery life is a big goal with these basic devices and the smartphone has battery life of up to 22 hours and standby time of up to 31 days for the single SIM and up to 25 days for the Dual SIM. charging is via a standard micro-USB charger and the phones have integrated LED flashlights.

The phone comes with games pre-loaded like the Snake Xenzia classic and a try and buy version of Nitro Racing by Gameloft. The rear camera has LED flash and the phone is equipped with Bluetooth and internal storage is via microSD cards up to 32GB. It will launch globally in select markets with launch happening in Q1 2017 in APAC, IMEA, and Europe. HMD does plan smartphones with the Nokia name as well.

Nokia branded Android smartphones are expected to land next year and one of those devices called the D1C saw specs and pricing leak tipping a cost of $150 to $200 depending on hardware.