Over the holiday weekend, 343 Industries indicated that more progression changes were on the way to Halo Infinite. 343 has wasted little time in coming up with a solution to fan complaints, as overnight, it revealed XP changes that will be heading to the game. Players will now get an XP bonus for their first several matches played each day, regardless of whether they win or lose.

In a thread published to Twitter, Halo community manager John Junyszek detailed the bonus XP players will get for their first six matches played each day. The spread starts out high with 300 XP for the first game, 200 XP for the second and third games, then 100 XP for games four through six before dropping to 50 XP for the seventh game onward. 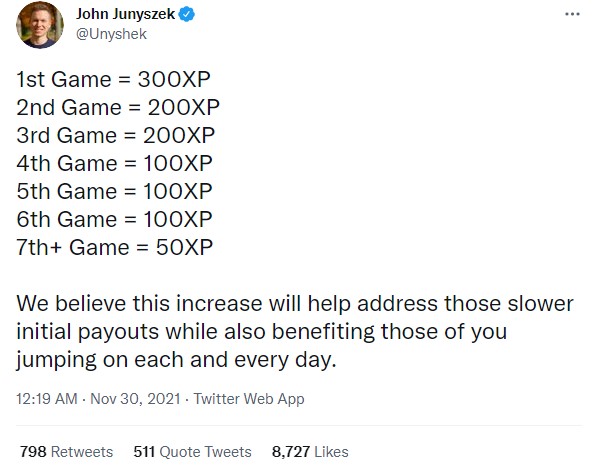 50 XP is the normal amount of XP players get for completing the “Play 1 Game” daily challenges, which were added to Halo Infinite as the first stop-gap solution to progression complaints. With these new changes, players will not only progress through the battle pass faster, but they’ll also be able to get bonus XP even if they’re only playing a few matches a day.

The arrival of this bonus XP should make leveling up through the battle pass a lot easier for most people, and it might alleviate complaints that leveling is too slow. However, to hear Junyszek explain the matter, it seems that this isn’t the only thing 343 plans to do in regards to tweaking multiplayer progression.

Bigger changes on the way?

After revealing the bonus XP changes, Junyszek followed up with an interesting tweet that suggests even more significant changes are on the way. “We know many of you want even larger changes and we’re committed to doing so, but those will take time,” Junyszek said. “We made this update based on data and player feedback, and we’ll monitor its impact after we push it live tomorrow morning. As always, keep sharing your feedback!” 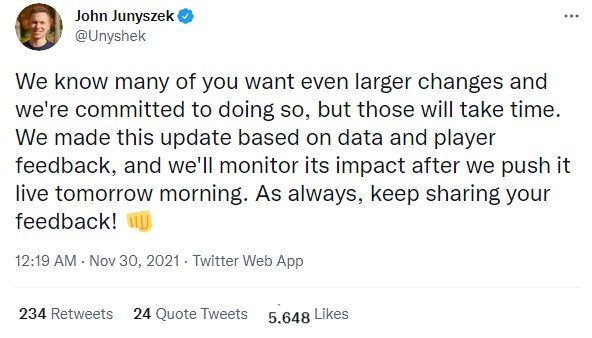 Obviously, we won’t know what larger changes 343 plans to implement until they’re officially revealed, but we can take a few guesses at what they could be. For starters, there seem to be many players out there who are disappointed that there’s no incentive to win games baked into Halo Infinite‘s progression system. With no bonus XP granted for winning games, some fear that players on their team will ignore objectives so they can focus on completing challenges, thus throwing the game for their side.

It’s a valid concern, but so far, 343 hasn’t indicated that it will implement such a progression feature. There have also been some calls to change event progression, because thus far, it seems that the Fracture: Tenrai event has been a little underwhelming among the player base.

Still, this is a step in the right direction, because that bonus XP means that players can still get some significant battle pass progression in even if they only have time for a few games. When 343 reveals these bigger changes Junyszek mentions, we’ll let you know, but otherwise, look for these XP changes to land in Halo Infinite today.