Halo Infinite battle pass changes are already on the way

It’s been a pretty wild week for Halo fans. Halo Infinite‘s multiplayer launched earlier this week, going live three weeks before it was originally expected to. While the reaction so far seems fairly positive, there have been some gripes from the player base and critics alike, with many focusing on slow battle pass progression as one of the primary concerns. Now, just a few days after Halo Infinite‘s multiplayer launched, 343 has announced that battle pass changes are on the way.

In a thread published to Twitter late last night, 343’s Halo community manage Jon Junyszek announced that the studio will introduce a new “Play 1 Game” challenge later this week. While it seems 343 won’t be introducing match-based XP as some people have requested, the idea behind the new challenge is to give players consistent progression through the battle pass. 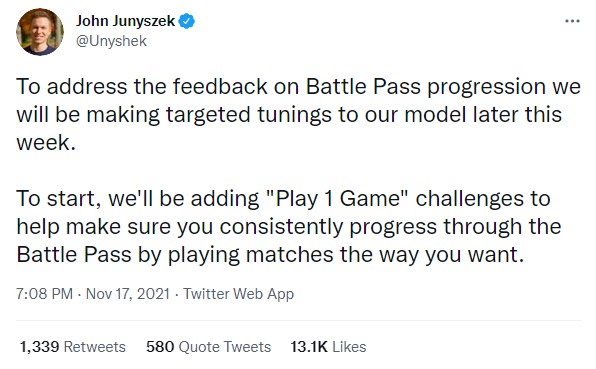 That, in this instance, is not a bad thing, because it means that everyone who logs in between November 23rd and the 30th will get the Sigil Mark VII Visor for free, which is the Ultimate Reward for this week. Finally, Junyszek says that 343 will change the duration of XP boosts, taking them from 30 minutes up to 1 hour.

More changes possibly on the horizon

Those are all of the changes 343 will implement for now, but there’s the possibility that more will come in the future. “We’ll be watching these changes closely to make sure they have the positive impact we all want on your progression,” Junyszek said. “This is only our first step – we are committed to continue evolving these systems but it will take time. Thanks for joining our beta, and keep the feedback coming!”

That statement suggests 343 will make more changes in the future if they’re deemed necessary, which is encouraging to hear. Indeed, the speed at which 343 has responded to these complaints has been impressive, as it was just a couple of days ago that I was lamenting what sounded like PR speak in 343’s prior statements about battle pass progression.

As it turns out, 343 is serious about making battle pass progression feel satisfying, so I’m happy to be wrong in this case. Hopefully, these changes make leveling the battle pass faster, because as it is right now, progression moves along at a snail’s pace. We’ll see if the changes have any meaningful impact when they arrive later this week.