Even though Halo Infinite‘s multiplayer is available in beta at the moment, there doesn’t seem to be a whole that’s going to change once the full game goes live on December 8th. In a post to the Halo Waypoint blog, 343 Industries says this is pretty much what we can expect from Halo Infinite multiplayer in season 1.

“While you may experience some bumps and bugs during this beta period, it does mark the official start of Halo Infinite Season 1, with all day-one maps and modes enabled as well as the full Season 1 Battle Pass,” 343 writes. “This means all the Battle Pass and customization items you earn or purchase during the beta will stay with you after December 8th.” 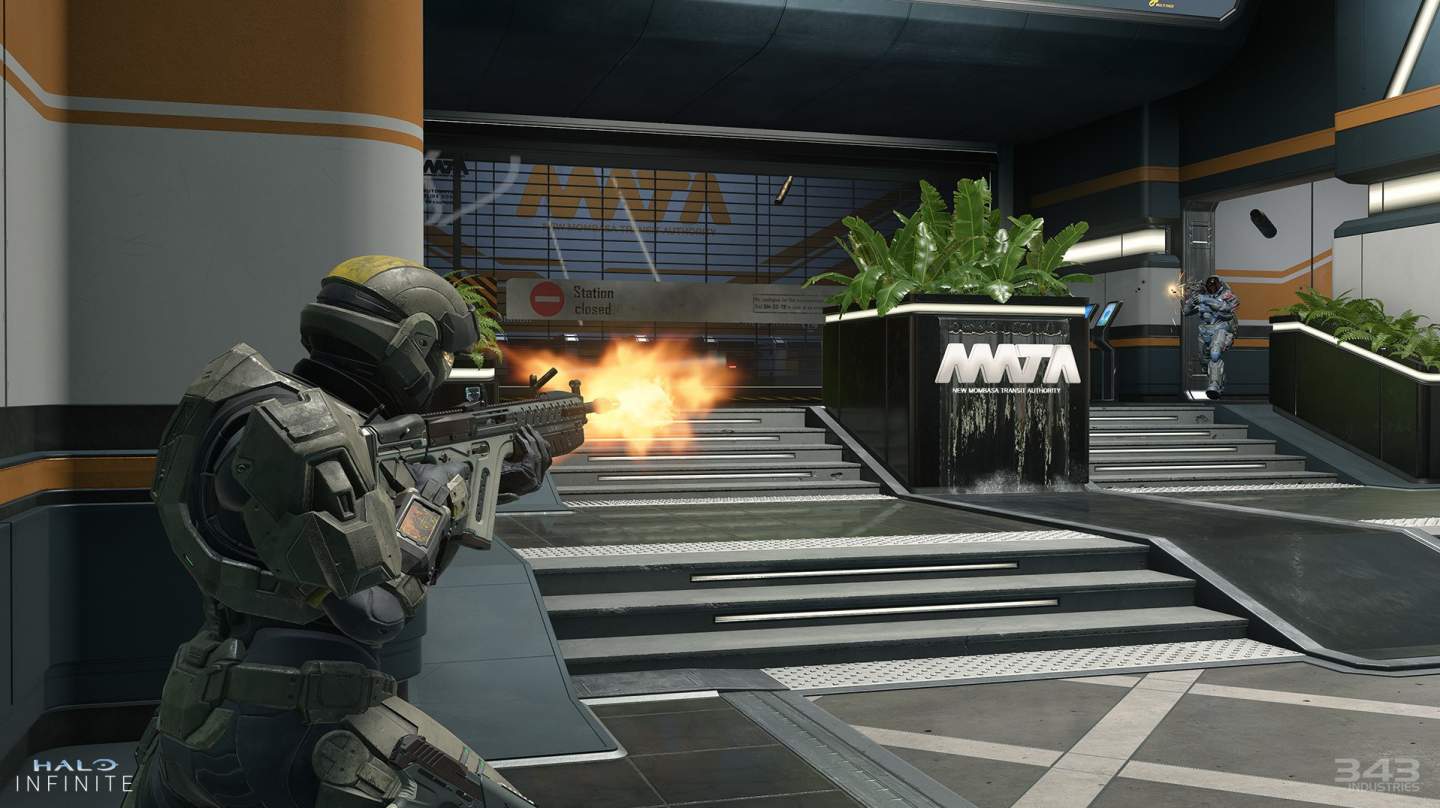 What’s there right now is a pretty good amount of content, with separate playlists for Big Team Battle (12v12), Quick Play (4v4), Bot Bootcamp (4v4), and Ranked Arena (4v4). Queuing for one of these playlists will drop you into one of a variety of game modes. For Big Team Battle, those game modes are Capture the Flag, Slayer, Total Control, and Stockpile. Quick Play, Bot Bootcamp, and Ranked all have a similar spread, with all of them offering Capture the Flag, Oddball, Slayer, and Strongholds, while Quick Play also has a One-Flag CTF mode.

First and foremost: the gameplay in Halo Infinite‘s multiplayer is fantastic so far. I love the way it feels on keyboard and mouse, and though it’s been a pretty long time since I last played Halo 3, in my mind, I’m drawing comparisons to that as I play Halo Infinite. I also love the look of Halo Infinite; it looks more like classic Halo games and less like Halo 4 and Halo 5, though I admit I’ve only had limited exposure to the latter game.

All of the guns that I’ve tried feel pretty good, too, though I need to spend some time in Halo Infinite‘s Academy mode to put the power weapons through their paces. I’ve been mainly using the assault rifle, battle rifle, and pistol in my multiplayer matches so far, and those all feel great to use, particularly the battle rifle and pistol. While the pistol isn’t quite as good as in Halo: Combat Evolved, it makes for a good precision weapon at mid-range, and I think players will be surprised by how deadly it can be against enemies that outrange the AR. 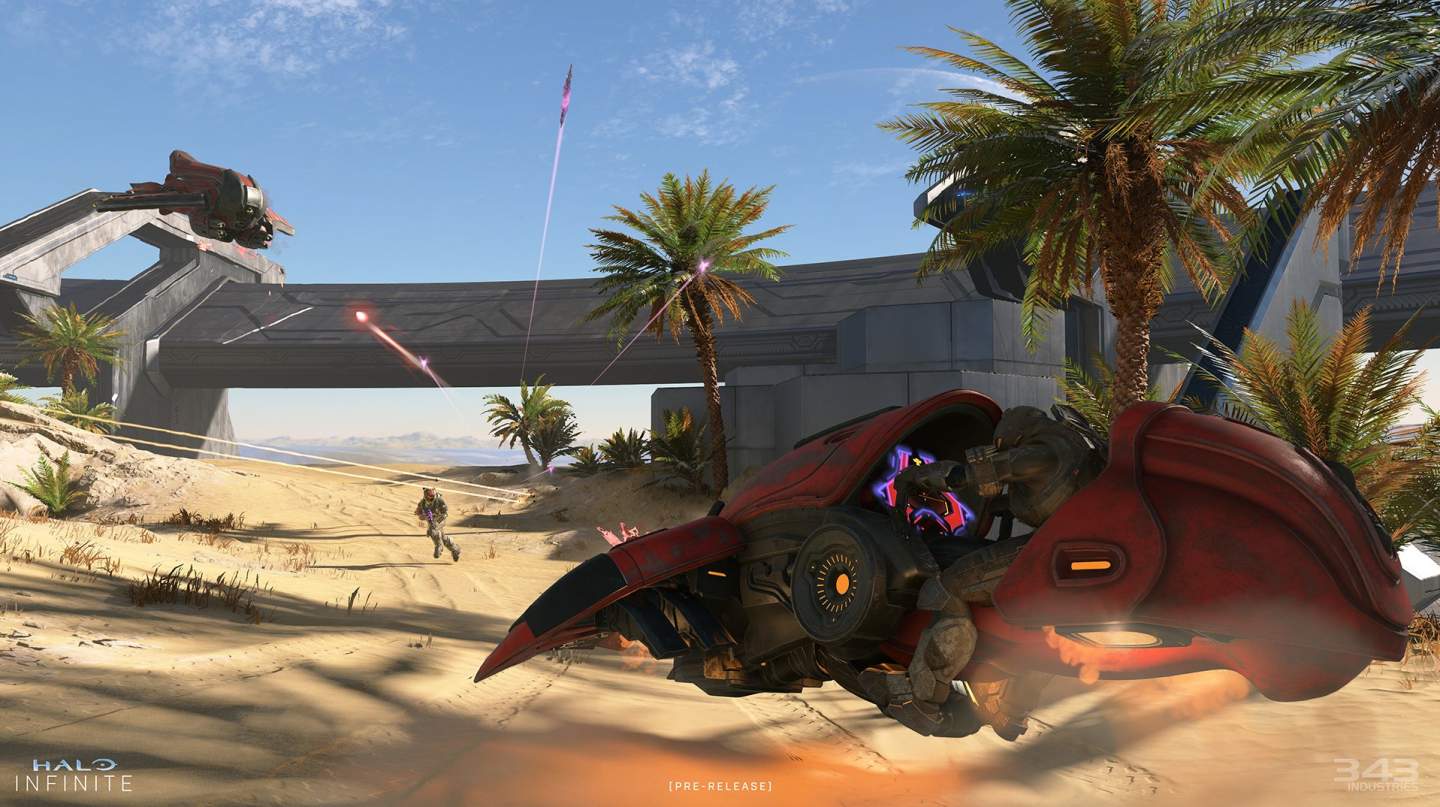 My main complaint with matchmaking is that I can’t queue only into Slayer if I want to. The other modes are fun, but most of the time, I just want to play Slayer. That might be boring, but I don’t think I’m alone in having this preference. I suspect that’s why 343 opted to bundle Slayer in with other modes like Oddball and Capture the Flag because if Slayer existed in a standalone playlist, it might be more difficult to fill other game modes consistently.

I’m also sad to see that Halo Infinite is missing some of my favorite game modes from past Halo games. Specifically, the absence of SWAT, Infection, and Griffball bums me out, and I can only hope that they get added sometime later on down the road.

For the first time in Halo history, Halo Infinite has bots. Players can opt to dive into Bot Bootcamp, where they’ll be placed on a team with four human players against a team of four bots. If you want to learn maps in a multiplayer game or try out weapons with opponents who will actually attempt to fight back, this is the mode for you. Bot Bootcamp is also a nice way to chill with a few casual matches at the end of the night, but beyond that, I have a hard time imagining most players spending any significant time here. 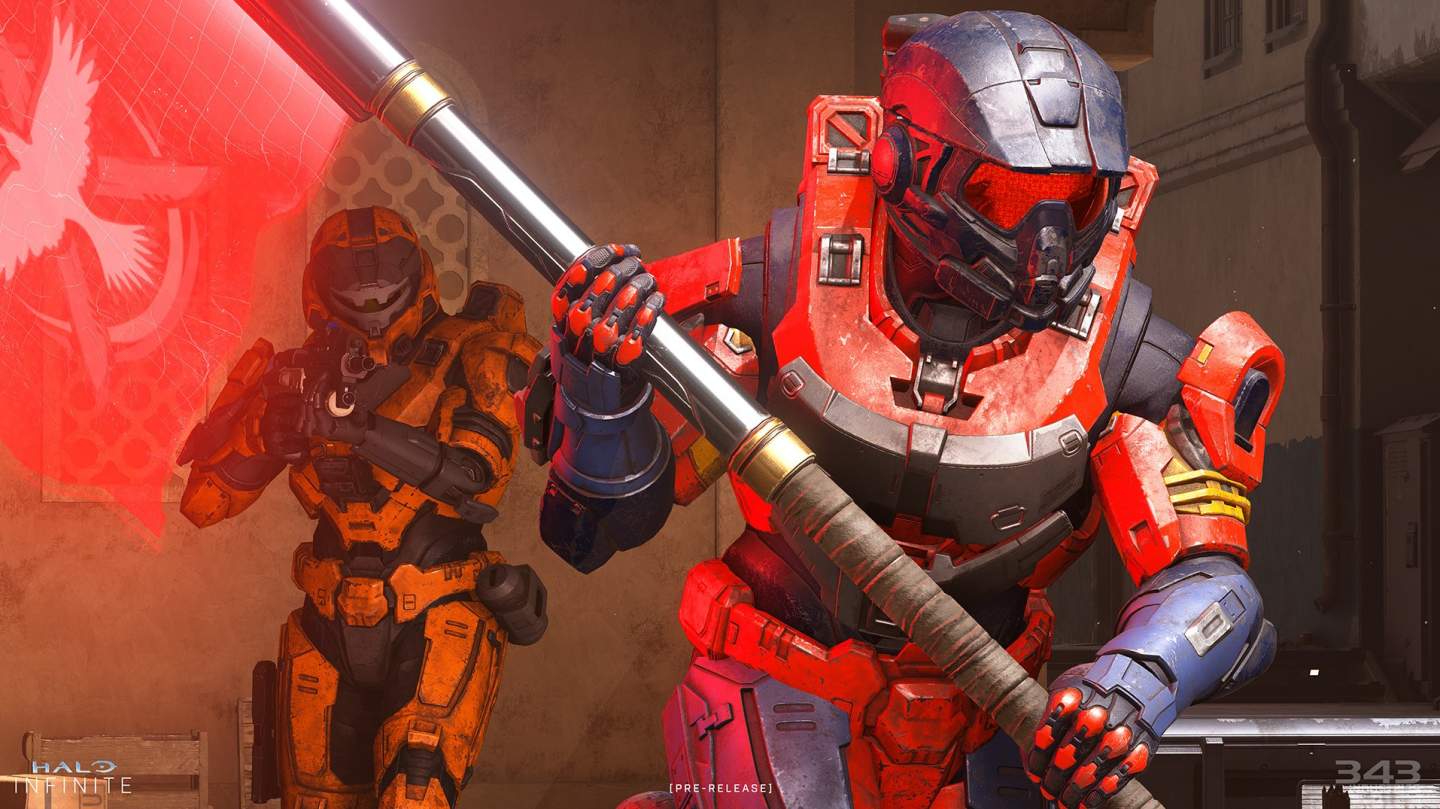 As you might imagine, the bots you’re up against in Bot Bootcamp are not a great replacement for human players. In every Bot Bootcamp game I played, the humans dominated the bots with vast score differentials, so don’t go into this mode looking for a challenge. Still, Bot Bootcamp has its uses, so I’m happy to have it along.

And then we come to the elephant in the room: monetization. Unlike Halo multiplayer modes of the past, Halo Infinite‘s multiplayer is free-to-play. That could be a good thing, as it could help Halo Infinite achieve enduring popularity, but Microsoft and 343 have taken the chance to stuff this game full of microtransactions for almost every type of cosmetic.

Halo Infinite feels a lot like Fortnite, with an in-game shop and a Premium battle pass that can be purchased for $10 and leveled up as you play. I don’t mind the battle pass so much, but some of the prices in the shop border on absurd. For example, when I checked it out yesterday, I saw that a skin was being offered for $20. Twenty United States dollars!

We’re talking gacha game levels of monetization here, and being free-to-play is no excuse for pricing a single skin so high. I will keep my wallet where it’s at, thank you, and I think everyone should do the same until 343 and Microsoft can come up with a pricing scheme that isn’t quite so insulting. 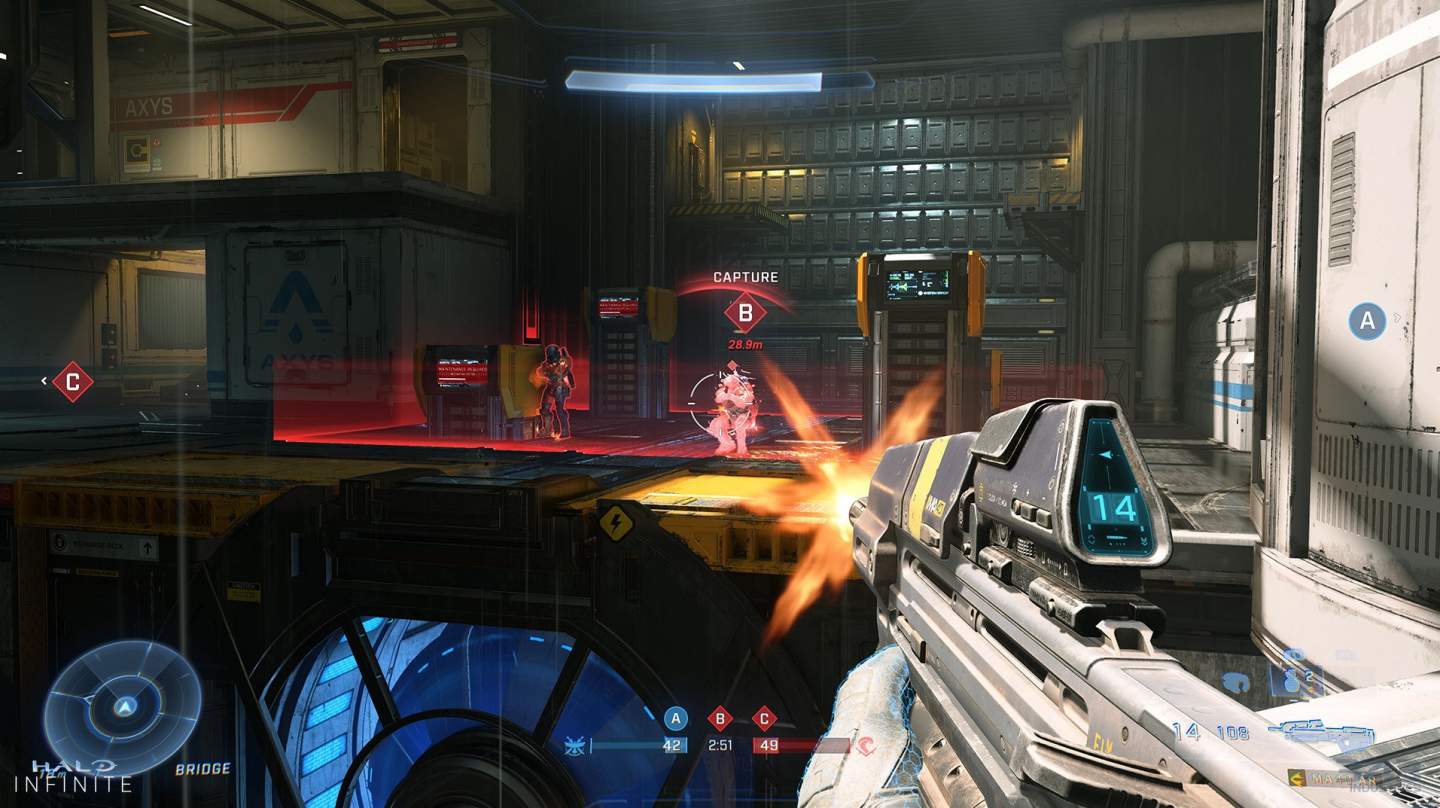 The battle pass is an entirely different beast, but still one that doesn’t sit very well with me. I haven’t taken a close look at the content it contains yet, but I’ve played enough to know that actually leveling it up is a big fat drag that is entirely unfun. For some reason, 343 decided to make it so the only way to earn battle pass XP is by completing challenges. There’s no XP gain simply for playing, which means that if you didn’t complete a challenge during that game you just played, you’re making no progress on your battle pass when you get to the score screen.

Put plainly: that’s no fun and it needs to be changed. In September’s edition of Inside Infinite, 343 suggested that it was listening to feedback and would consider changing battle pass progression, saying, “We have heard community feedback around wanting more progression options including things like ‘match XP’ to feed into the Battle Pass and an entirely separate, incremental system along the lines of earning SR152 in Halo 5: Guardians. Expanding Multiplayer progression offerings is something the team is actively exploring, and we look forward to continuing to evolve the experience in future seasons post-launch.”

That sounds an awful lot like PR speak for “we’re not going to talk about this more right now and hope people stop bringing it up,” but the battle pass progression has to change, and we shouldn’t have to wait until season 1 is over in six months for those changes to be implemented. There’s no better way to take the wind out of a player’s sails after a close match than by showing them that they earned no experience toward their battle pass – which they paid actual money for – despite pulling off a hard-fought win or otherwise giving it their all to the end.

Halo Infinite‘s gameplay is excellent, but outside of your matches, all you see are greedy cash-grabs and reminders of stingy progression. Even after just a day of playing, I can tell you that 343 and Microsoft need to reconsider some things about the battle pass and the cash shop or else they’ll risk losing players to other games. The fans were right to sound the alarm on battle pass progression when 343 originally announced these changes, and now I’m hoping the studio listens.