So far, it seems that the reception to Halo Infinite‘s multiplayer has been good when it comes to the actual gameplay and mixed when it comes to everything else. One hot-button topic for players seems to be battle pass progression, with a number of players complaining that it takes too long to level up Halo Infinite‘s battle pass and unlock new cosmetics. While 343 Industries has already tweaked the progression system once, it sounds like work is about to begin on more dramatic overhauls.

As the holiday weekend wrapped up, 343 Industries head of design Jerry Hook took to Twitter first to recommend that management and survival fans check out Len’s Island, noting that he’s been playing the game over the break. Then, seemingly anticipating droves of Halo Infinite players flocking to his tweet to ask him why he was playing someone else’s game instead of addressing Halo complaints, Hook also published the follow-up you see below:

“Yes I am still playing Halo and feeling everyone’s pain on progression,” Hook added. “We are back at it next week and this will be top of my list with the team.” While we know that progression was a primary concern for 343 Industries, Hook’s confirmation that it will be top of his to-do list might alleviate some concerns among the player base that nothing will ultimately happen.

What needs to change about Halo Infinite’s progression?

In our first impressions post about Halo Infinite‘s multiplayer, we found that the gameplay is on point but leveling through the battle pass feels unrewarding. This is mostly due to the way battle pass XP is earned. While games like Halo: The Master Chief Collection give players battle pass XP for simply playing matches, there is no such mechanic in Halo Infinite.

Instead, Halo Infinite players get all of their battle pass XP by completing challenges, which some argue can prompt teammates to ignore objectives and chase challenges as they play matches. Beyond that issue, there’s the simple fact that sometimes you don’t complete a challenge when you play a game, which means you don’t get any battle pass XP, and that doesn’t feel particularly good. 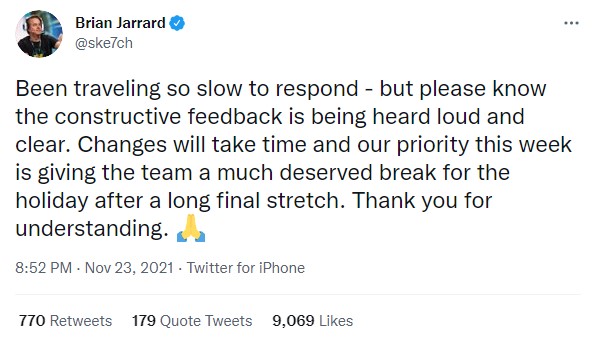 343 fixed that last issue by adding a “Play 1 Match” challenge that can be completed over and over for 50 XP, but to hear Hook explain his priorities now that Thanksgiving is over, it sounds like there are even more significant changes on the way to Halo Infinite. We’re not sure what those changes could be – while we expect to see changes to battle pass progression, we could also see some changes to the battle pass rewards track, which has been the subject of some complaints as well.

Before the extended Thanksgiving weekend kicked off, Halo community director Brian Jarrard said that feedback on the progression system is “being heard loud and clear,” further suggesting that 343 is considering changes to it. If 343 Industries is hopping back into the thick of things and hammering out some progression changes, then we should know their plans soon. We’ll let you know when 343 details specifics, so stay tuned.