The creator of the McLaren F1 was always going to have a high bar to follow, but Gordon Murray Automotive’s T.50 may well surpass the supercar-classic. Revealed for the first time today, the T.50 promises to combine not only raw power but aerodynamics systems never before seen on a production road car.

In fact, at first glance at the styling of the T.50 from the rear, and you might be forgiven for thinking Murray was trying to build a Batmobile. There’s what looks a huge turbine in the middle, flanked by the lights.

It’s not a jet engine, though, but a ground-effect “fan car” system that the automaker promises “rewrites the rulebook for road-car aerodynamics.” A 400mm fan works with active underbody aero features and dynamic rear aerofoils, allowing GMA to precisely control the flow of air through and around the car. That can boost downforce, but also serves other purposes.

For example, by adjusting the angle of the rear foils and the flow of air through the fan, the T.50 can effectively suck itself down to the road for maximum stability. It can also use the system to cut drag, and make the T.50 more nimble. That can improve on efficiency, too.

Meanwhile, the same system is used for cooling and to improve the supercar’s braking performance, all automatic and independent of the aero work. The system was developed with GMA partner Racing Point Formula One Team, and from next year will be honed in the same wind tunnel that’s used for their actual F1 cars.

There’ll be six different aero modes, each of which adjusts how the fan and other components operate. The most aggressive of the six will be Vmax Mode, which not only borrows slipstreaming tech from motorsport, but adds in extra power from a 48-volt integrated starter-generator together with ram induction. 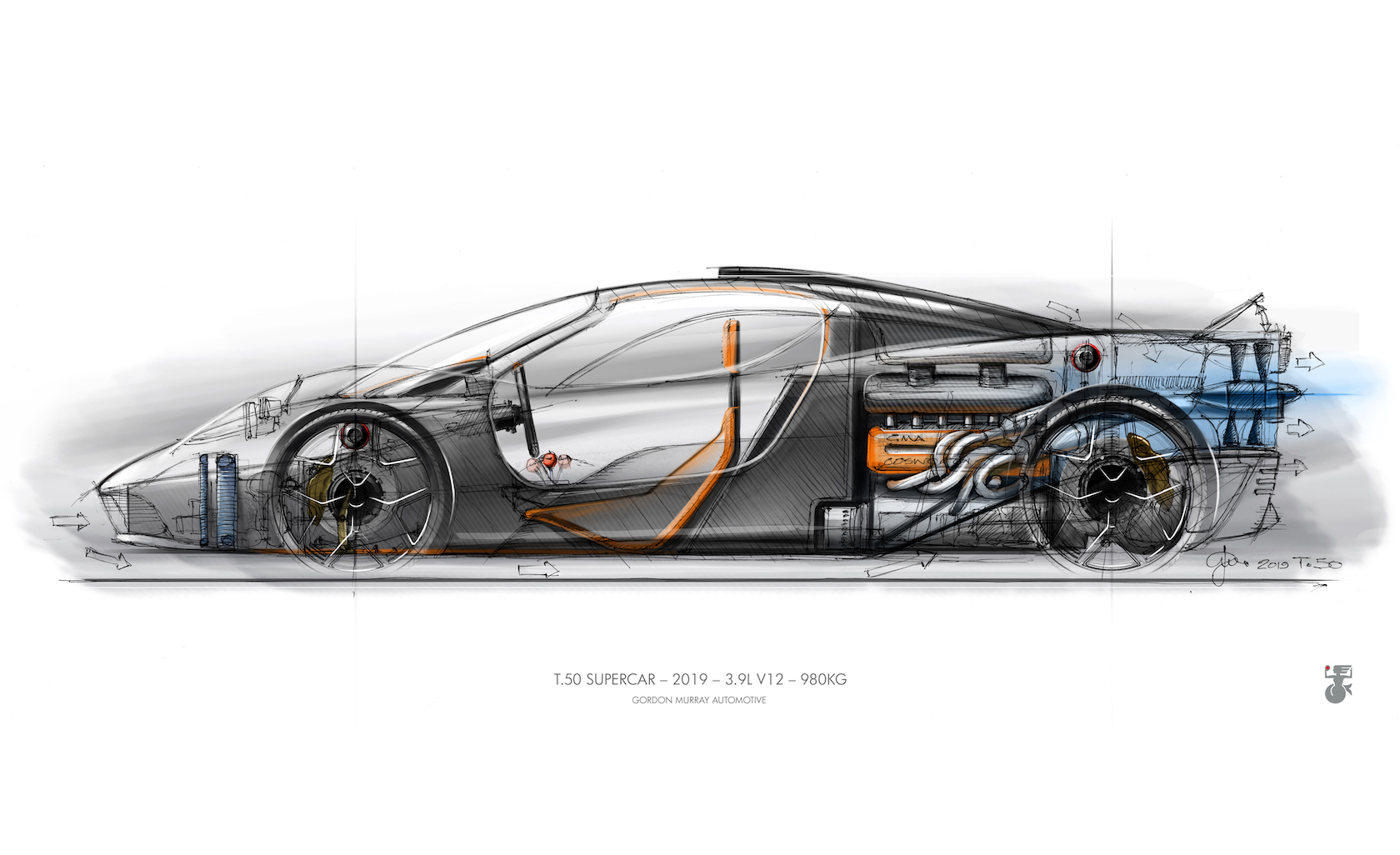 The result is 700 horsepower, from the T.50’s custom Cosworth 3.9-liter V12 engine. That’ll have a red line at a frankly ridiculous 12,100 rpm, GMA says, and a normal power output of 650 hp and 332 lb-ft of torque. It’s paired with a six-speed transmission. Final performance figures, like 0-60 and top speed, haven’t been revealed yet.

“I’ve dreamt of delivering a road car with a ground-effect fan since I designed the Brabham BT46B F1 racing car in 1978,” Murray says, and so he’s not wasting this opportunity. The T.50 uses the fan to rapidly accelerate air that’s passing under the car, and then forcing it through active boundary-layer control ducts integrated into the rear diffuser. That can dramatically impact the way the 2,161 pound car reacts. 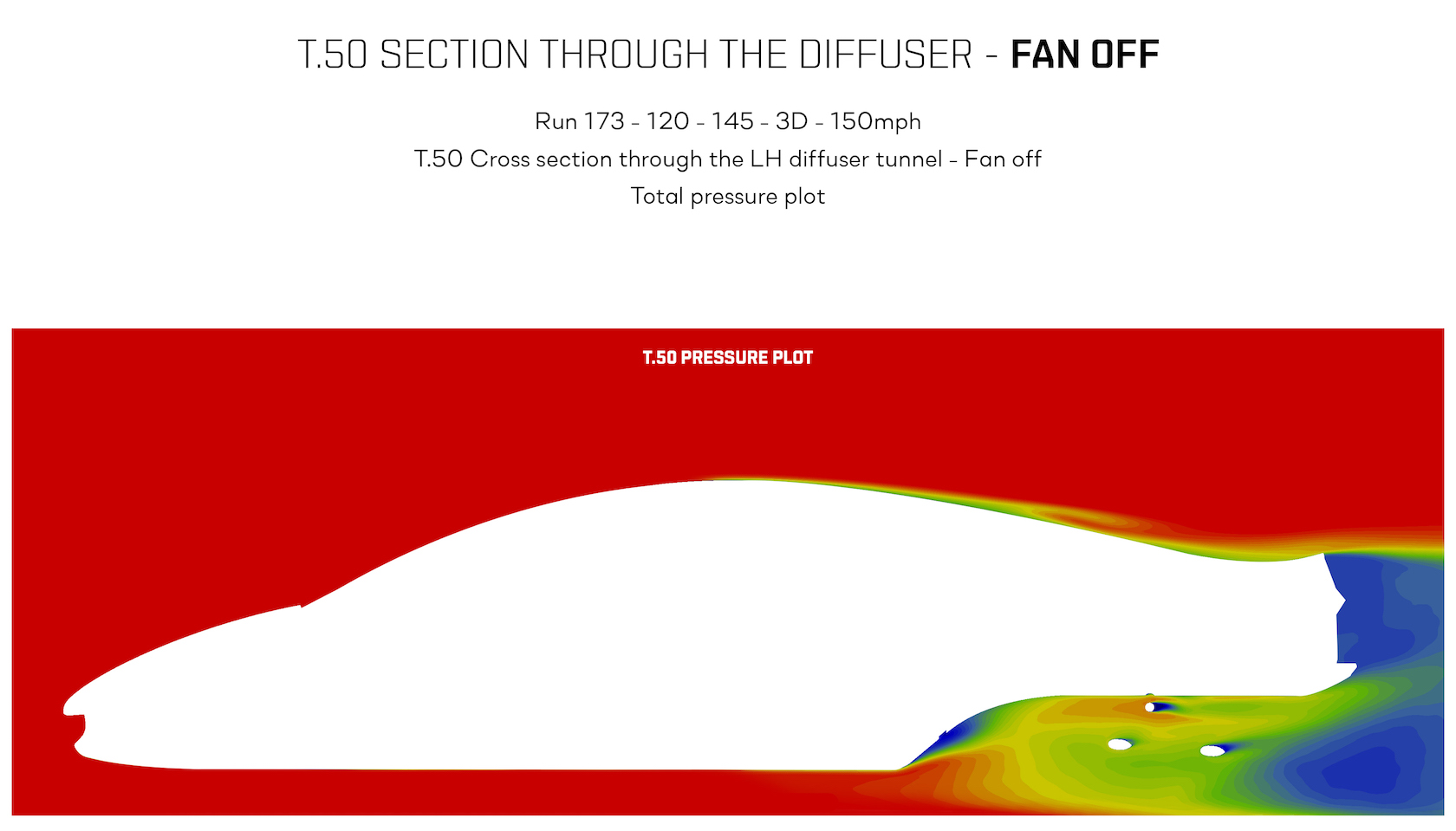 Since the car can control the relative rate of air going under and over its body, it means greater management of downforce without excessive visible body-mods. There’s no vast spoiler or weird fins and flaps, and nor is there a “skirt” to maximize the “fan car” effect. Indeed, in Auto Mode the whole system just works automatically, responding to how the T.50 is being driven.

Braking Mode is similar automatic, using the rear aerofoils and fan to double the levels of downforce in an instant. Stability and grip are improved, GMA says, claiming the T.50 can cut more than 32 feet from its 150-0 mph braking distance. 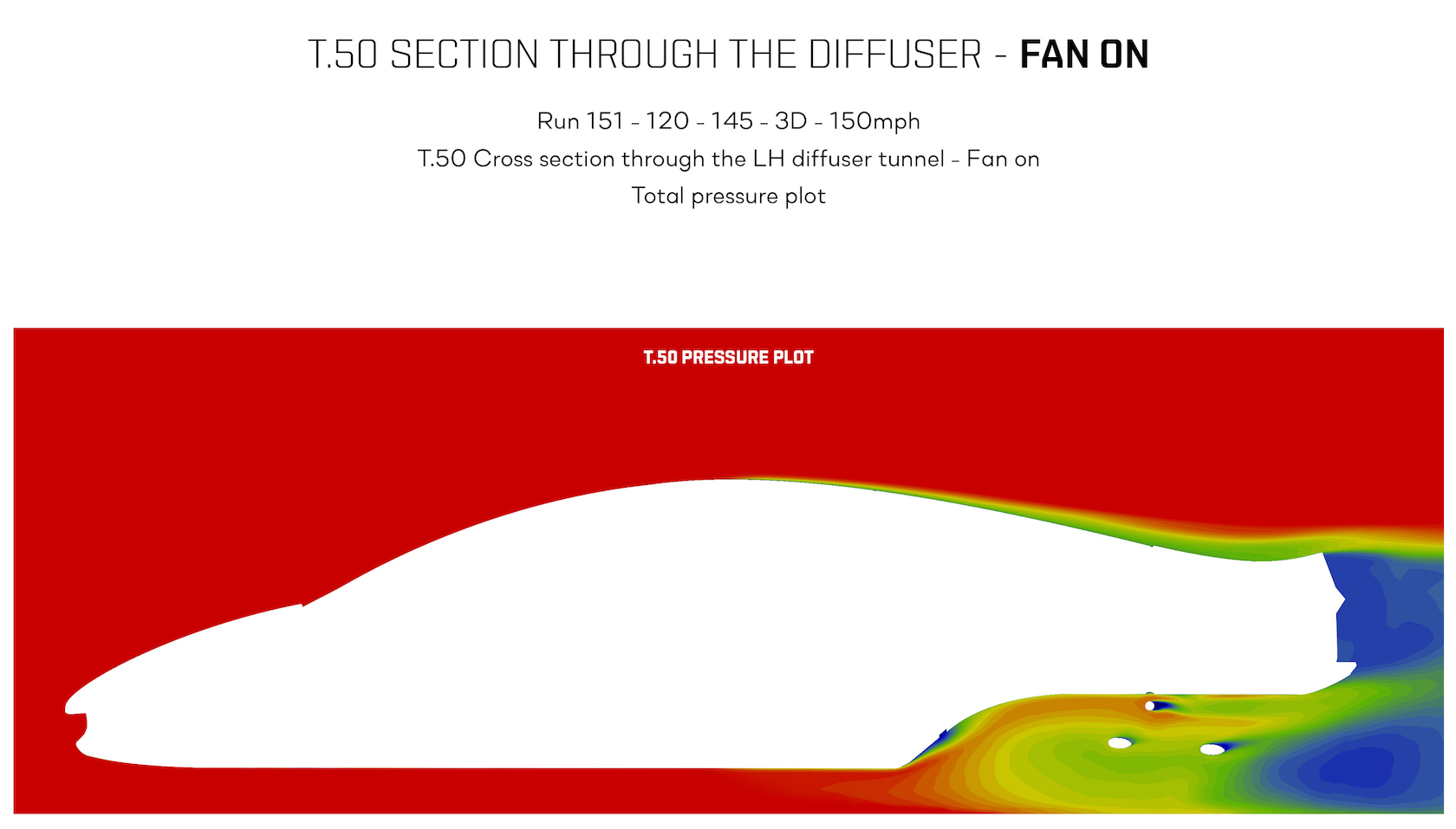 High Downforce Mode boosts downforce by 30-percent, while Streamline Mode effectively does the opposite: drag is cut by 10-percent, in the name of improving straight-line speed. It also cuts fuel consumption in the process. Vmax Mode borrows the same aero configuration as the Streamline setting, but boosts power using the starter-generator motor for up to three minute bursts.

Finally, there’s a Test Mode which only works when the car is stationary. It’s intended to show off the aero system for bragging rights.

An exclusive experience for three

GMA is still playing plenty of T.50 details close to its chest. There’s only a rear view image to go on so far, and the interior – with three seats, the driver sitting centrally and flanked by two slightly rear-set passenger seats – is also unknown. The automaker promises it won’t be a sacrifice to sit in there, though, with comfort to go with the performance.

Only 100 of the cars will be produced, Murray says, and “the majority” have already been allocated. Each will spend more than £2 million ($2.57 million) for their super-exclusive supercar. Deliveries are expected to begin from January 2022.