Google is still actively pursuing self-driving car commercialization, though Sergey Brin’s 2017 prediction may not come true as the company continues to develop their safety features and the high-definition mapping they need for successful navigation. Last year, Brin said he envisaged autonomous car tech being on the market within five years, though a new batch of hands-off test-drives suggest that not only is there still some ways to go before that’s practical, but that Google is taking a markedly different approach to other self-driving projects.

For a start, the car needs a much better understanding of its surroundings than Google Maps can currently deliver. Although Google’s prototype fleet is bristling with sensors – including the distinctive barrel-shaped LIDAR laser scanner on the top – the key smarts are in the maps loaded into each car’s brain.

Those maps, TIME points out, have details on road markings, driveways, curbs, and other metadata about potential routes. Without it, the car is unable to make its way around.

It’s a similar message to that Nokia’s HERE team told us last month, when we went behind the scenes on their Maps HD project. Using high-resolution scanning, Nokia’s team has been creating super-rich cartography with which autonomous cars could go coast to coast.

The system has already been trialled in Germany by Mercedes-Benz.

Google’s autonomous project chief Chris Urmson says that the company won’t be looking to commercialize until it can be sure it’s all safe for other road users, passengers, and pedestrians. That will involve a huge amount of new mapping data; right now, the cars are at home on Mountain View roads, but couldn’t necessarily handle other cities.

Where Google and Nokia apparently diverge, however, is in the driving style of the car. TIME’s Harry McCracken describes the general feel of the car as being notably robotic.

“Much of the time, the steering seemed to be choppier and more insistent than that of a typical human motorist,” he observed. “The car felt less like it was performing an act of physical dexterity, and more like it was solving a math problem.”

Ironically, the one memorable time that it felt more akin to a human driver – when the autonomous car crept forward while waiting for a light to turn green – was described as a bug by Google. The company says it is working on “smoothing out” those micro-adjustments that led to the behavior. 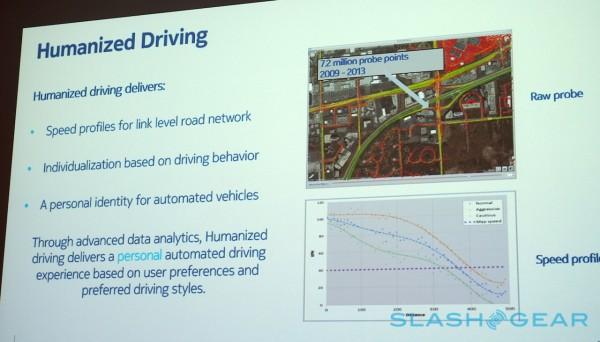 In contrast, Nokia argues that a more human driving style is essential if autopilot tech is to be broadly accepted. Speaking to SlashGear last month, HERE VP of Connected Driving Ogi Redzic described it as a case of passenger comfort, and suggested that self-driving cars could end up with multiple, selectable “personalities” with which they could tackle the road.

For instance, the car could drive more aggressively if you told it you were late for an appointment, but more cautiously if you had your children onboard too.

Google still declines to discuss exactly how it will bring the technology its Google[X] team has been working on to the market, though rumors last year suggested it was considering launching its own brand after having been snubbed by the major established automotive players.