Google have, as expected, announced Google TV.  Claiming that people watch on average 5hrs of TV per day, and that there are 4bn TV users worldwide, Google have added search functionality to the TV experience.  Google TV is based on Android with the Chrome browser and full Flash support, and there’ll be Logitech set-top boxes that daisy-chains in-between your HDTV and your existing cable or satellite box, or standalone Sony HDTVs or Blu-ray players with Google TV integrated.

In a demonstration punctuated with technical problems, as the Bluetooth keyboard refused to hook up to the Google TV box, the Google IO team showed how viewers would be able to search for channels or for specific programs via an on-screen search box, overlaid on top of whatever was being fed from the cable TV tuner box.  It’s also possible to set a timed DVR recording direct from the UI.

Type in a search query, however, for a show and you can also see online content as well as what’s available through broadcast TV.  For instance, a search for House brought up Amazon, Hulu and Netflix results, including options to stream content as well as buy it on DVD, and you can browse to the websites without having to change inputs on the HDTV itself.  Google have worked with Amazon and Netflix to integrated things like the Netflix Instant Queue directly into the Google TV interface. 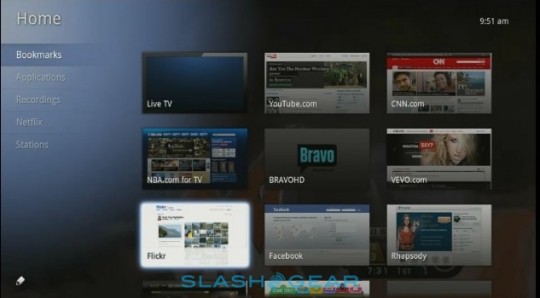 It’s also possible to browse YouTube and view custom streams of content depending on keyword searches.  Google demonstrated a custom YouTube video channel which only prioritised Elmo videos from Sesame Street, for instance.  The way Google are describing it, “you’ve gone from the 150 channels that you used to have, to millions to channels, overnight.”

There’s also a picture-in-picture style viewing system where you can have both a Google search and a live TV stream on-screen at the same time.  It doesn’t just have to be a search, either; you can view any webpage, and access a combined bookmarks system that incorporates your favorite channels and your favorite sites.

As for the hardware, Google TV sits in-between your existing HDTV and set-top box, with HDMI connections and an IR blaster to control the other hardware.  It’ll be 3D graphics capable, together with surround sound, and there’ll be various input peripherals including remotes, QWERTY keyboards and a new Android app that connects over WiFi and supports voice searches.  It’s possible to have more than one remote control – including an Android device – connected to a Google TV box at any one time, and you can share content that you’ve browsed to on the phone straight to the HDTV.  Sony and Logitech have signed up to provide Google TV hardware – including televisions, Blu-ray players and companion boxes – which will go on sale this fall at Best Buy.  Intel are providing the Atom processors that will power the whole system, and Google have also signed a partnership with Dish Network. 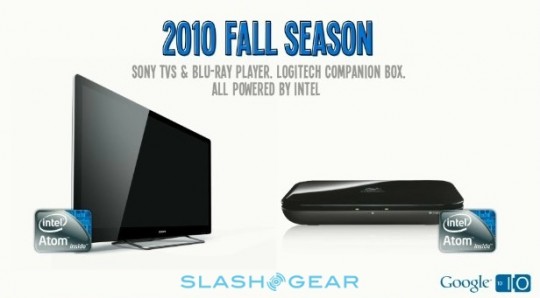 Google TV is based on Android, with the Chrome browser and full Flash 10.1 support, and you’ll have Android Market access for things like Pandora’s internet radio app.  Google are also opening up the APIs for Google TV so that developers will be able to create webapps and standalone software for the system – such as YouTube Lean Back – as well as eventually open-sourcing the technology.  Since Android 2.2 Froyo adds remote app installation users will be able to install new apps to their Google TV box from their desktop computer.  Still, you won’t be able to access the Android Market on Google TV until early 2011, and it won’t be open-source until late 2011.  You can sign up for more details at google.com/tv.