This afternoon Google announced their financial Q3 2014 earnings, this just a short while after Apple held their 2014 iPad event. Generally Apple’s events squash every other kind of technology news released during the day, but Google’s earnings – especially ones that turn their stock into a rock – should be strong enough to break on through. What we’re seeing today is Google’s CFO Patrick Pichette announce that they’re excited about the growth in our advertising and emerging businesses.”

While Pichette’s assurances that Google’s ads and emerging business were on the rise, and that their revenue was up 20% year on year, projections didn’t match the outcome. Because analyst guesses at Google’s earnings marks were ever-so-slightly higher than Google’s actual announced earnings, Google’s stock took a downturn in after hours trading.

Fear not though, followers of the stock. Things aren’t nearly as bad here as they were with Netflix’ stock plummet yesterday. 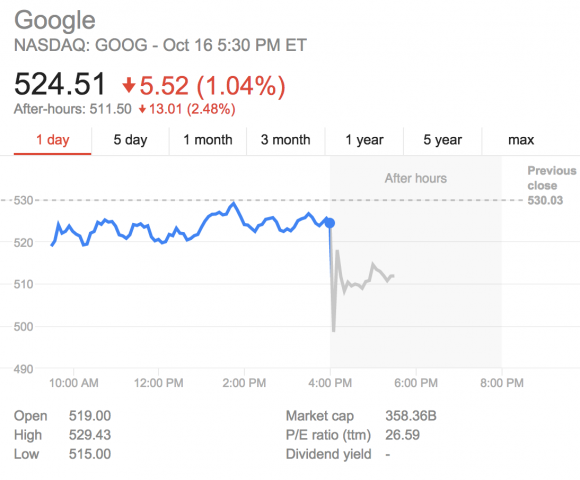 Below you’ll see a YouTube video link connecting you to the Google Earnings call. Just like previous quarters for several years now, Google has broadcast their earnings call with all those interested: stock holders, media, and the public.

Google’s net income for the three month period that ended on September 30th, 2014, Google had a net income of $2.8 billion USD. From the start of 2014 until this quarter’s end, Google had a cool $9.69 billion in net income.

That’s after $7 billion spent on Research and Development, $2.6 billion of which was spent in the past three months. As of September 30th, 2014, Google had $62.16 billion in cash, cash equivalents, and marketable securities. This compares to a sum of $58.72 billion Google had on December 31st, 2013.

As of the 30th of September, 2014, Google had a headcount of 55,030 full-time employees (51,564 in Google and 3,466 in Motorola Mobile). This will change, of course, when Google’s final sale of Motorola to Lenovo is complete. We’re still not entirely sure when that’ll be.