Google Meet is getting a revamp, with the video calling platform debuting a new UI, a Data Saver option to trim bandwidth costs, and new video backgrounds among other changes. The most important thing, though, is arguably what isn’t changing, with Google still keeping Meet free to use – at least through June.

Google Meet Data Saver also focuses on cost effectiveness. Currently, Meet will try to deliver the best video and audio quality that’s possible based on the bandwidth of your connection, which is fine on unmetered WiFi or unlimited mobile data plans.

For those who aren’t so unconstrained, however, Data Saver will limit Meet’s data usage on mobile networks. That will “allow you and the person you’re calling to save on data costs, which is especially important in countries where data costs can be high, like India, Indonesia and Brazil,” Dave Citron, Director of Product Management for Google Duo and Google Meet, explains.

Meanwhile, there’s a new interface for Meet, particularly around common uses like screen-sharing and displaying presentation content. From next month, Citron says, there’ll be the option to pin multiple tiles within the UI – so that you could always have a presenter and their slides showing – while resizing, repositioning, or hiding completely your own video feed will be offered too. Constantly seeing yourself in video calls is believed to be a key contributor to so-called “Zoom fatigue” according to researchers.

Even as the layout of participants change, Citron points out, their names will always be kept visible. 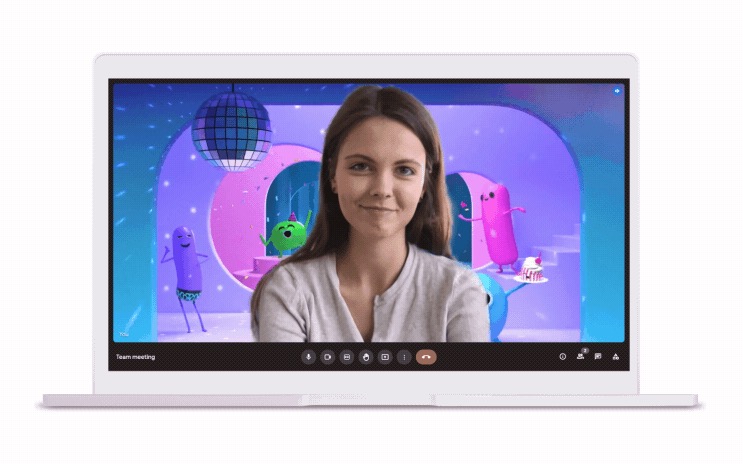 As for how you yourself appear, Google is expanding its low-light Meet on mobile system. Launched last year, it allowed Meet on smartphones to automatically adjust the video settings to counter having too much light behind you, or brighten a particularly dark scene. Google Meet on the web is getting the system now, and will automatically detect when you’re underexposed and then adjust the brightness intelligently. That, Citron says, will be added to Meet users in the coming weeks.

Video backgrounds will be supported in the next few weeks, too. They’ll replace the actual background behind you with – to begin with – one of three videos: a classroom, a party, and a forest. More options will come in due time, Citron promises.

In the coming months, meanwhile, there’ll be a new feature called Autozoom. That will use AI to automatically center users in the middle of the frame, and crop them accordingly. However, unlike the other features announced today, Autozoom will only be available to those paying for Google Workspace.