Google Maps vs Apple Maps hands-on to the airport

When faced with the idea that either Apple’s Maps solution or Google’s Maps solution might be better at everyday situations here on the first day when both are available for use on the iPhone, we decided to put them up to the test. The test in this case was getting from here (at a hotel in Saint Paul) to the Minneapolis International Airport, deciding as we do so what constitutes a more effective set of controls.

Searching for the location we’re headed to here has points going to Google for putting the Minneapolis airport (the closest airport to us at the time) up on top of the search list while Apple suggested we look through every airport in their collection, no matter the distance. If we searched “Minneapolis Airport” of course both apps brought up the correct location first. It’s extremely important that Google’s solution is location aware in this search piece of the puzzle, without a doubt. 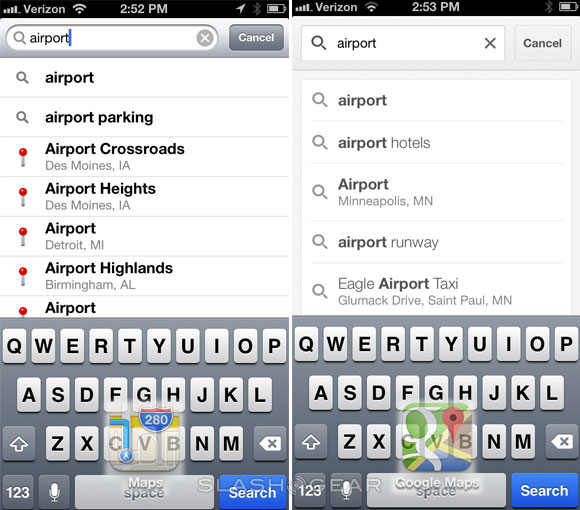 Saying “I want to go to there”

Of course if you want to head to the Airport after you’ve searched for it, a classic Liz Lemon command should do it, right? As the iPhone works with Apple’s Maps solution with Siri, actually commanding Siri to bring us to the Airport had the correct airport on the list right up near the top of the list – tap it and you’re on your way. This is just about the simplest process in the book, and Apple certainly gets points for the simplicity factor in attaining a voice-commanded request. 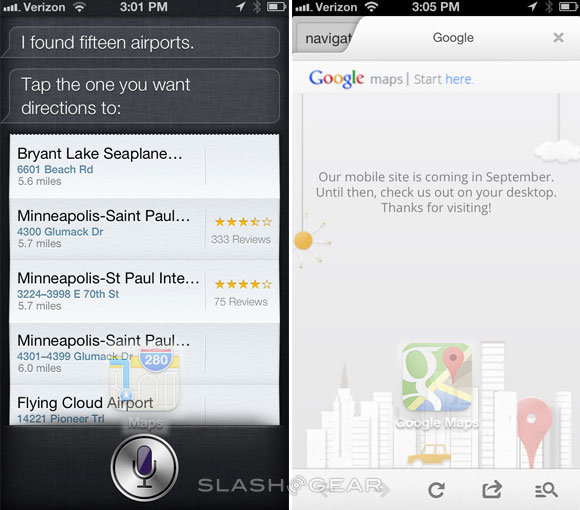 Unfortunately even if we open up the official Google search app (basically the Apple equivalent of Google Now for Android) we can’t get to Google Maps directly as Siri does with Apple Maps – instead we’re directed to a site that says Google’s Mobile version of maps (in this case meaning in-browser) isn’t ready for action quite yet.

It’s possible in both the Google Maps and Apple Maps to choose alternate routes depending on where you’re going. The first display you get when heading out in a Google Maps is a list of routes listing the amount of time it’ll take, “via” the largest road, a note about traffic (heavy, light, etc), and the physical distance you’ll be traveling. With Apple Maps you get suggested routes on the birds-eye-view map with tags on them that say “Route 1”, “Route 2”, and more – when you tap on each of them, the amount of time they’ll take for you as well as the physical distance is shown in the status bar above the map. 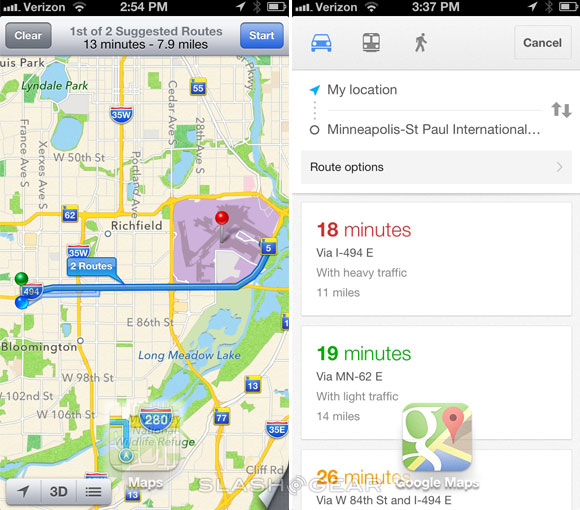 If you tap “show traffic” while you’re viewing your alternate routes in Apple Maps, you can see red dotted lines where heavy traffic exists, but these markers are hidden under the large blue lines that are your routes – so you won’t be able to see if there’s traffic there either way. Google’s method for giving you options in your routes here gets points for transparency and ease of use.

Actually traversing your chosen route is largely the same on both platforms, believe it or not, with the big differences being in the before and after portion of this puzzle. If I, Chris Burns, had to choose which version looked more aesthetically pleasing, I’d certainly choose the flattened modern look of Google Maps over the third dimension skeuomorphisms present in Apple’s approach. Google’s visuals also offer a bit more detailed information about the turns that are coming up while Apple simplifies a bit more than is necessary at this juncture in the process. 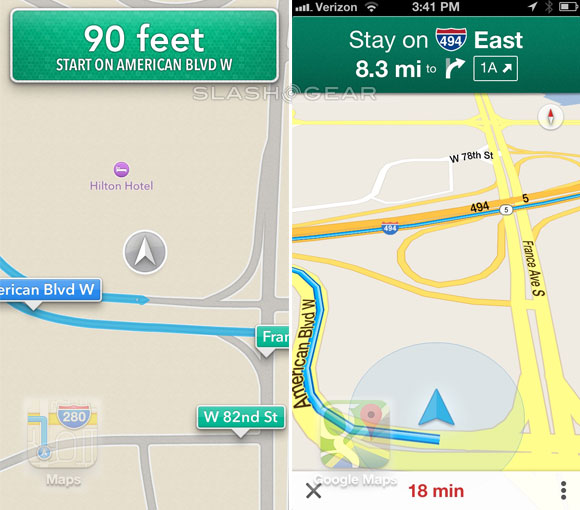 The accuracy of each of the map ecosystems is really up to you – its your area that you’re going to be navigating, and if you’ve used one or the other and found it to be less than pleasing, we suggest giving the alternative a try.

This is just one of many tests we could perform on and with these map apps. A third alternative you really should be considering is Telenav’s Scout – a rather graphically intense version of all this with controls and details precise and excellent from top to bottom – with that app you’ll be getting a whole different game, all about navigation and exploration at once.

Remember that both Apple Maps and Google Maps are free apps, with the former being installed on your iOS 6 device right out of the box and working with Siri and the latter being based on Google’s approach, integrated with your Google account. We recommend you give both for a whirl, just for kicks.