For years, winking has been the universal “come hither” gesture; now, for those flirting while wearing Google Glass, it can also grab a lasting memory of whoever caught your eye. A new, unofficial Glass app called Winky enables wink-photography, snapping an image whenever the internal camera notices the wearer specifically blinking their eye.

The tweak is the handiwork of Mike DiGiovanni, Emerging Technology Lead at Roundarch Isobar, who you might remember from yesterday’s “Bulletproof” lockscreen for securing Glass when it’s not gripping your face. Winky is an Android app that monitors the Glass user’s eye and, when they give an exaggerated blink, fires off a photo without them having to use the “OK Glass, take a photo” spoken command, or the physical shutter-release button on top of the frame.

We use “exaggerated” on purpose, since Winky doesn’t trigger when you’re blinking naturally. Instead, as DiGiovanni’s brief demo video shows, you need to make it reasonably obvious what you’re doing before the sensor picks it up.

“Winking really changes things. You might not think it’s hard to say “Ok, Glass Take a Picture” or even just tap a button. But it’s a context switch that takes you out of the moment, even if just for a second. Winking lets you lifelog with little to no effort. I’ve taken more pictures today than I have the past 5 days thanks to this. Sure, they are mostly silly, but my timeline has now truly become a timeline of where I’ve been” Mike DiGiovanni

It also required some heavy-handedness with how the internal sensor is used. Although the wink motion is already supported by Glass, it turns out Google’s software disables it if the software is a user-build. Mike had to intercept the wink ahead of anything else in order to use it as a trigger. 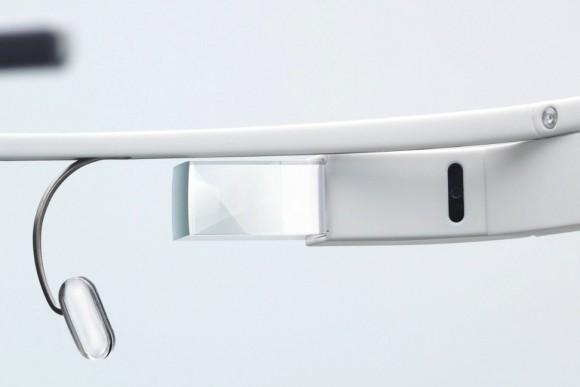 He’s also released the code for those lucky enough to have a Glass Explorer Edition, though you’ll need to compile it and run it as an APK before you can use it. The app also needs calibrating with your wink, too.

Photos triggered by more commonplace gestures are unlikely to go down well with the privacy advocates already worried by Glass, though at least the eyepiece kicking into action to preview the shot just taken will give some indication that an image has been taken. Still, there are calls for Google to add a notification LED to the front of Glass, to give those around the wearer a more obvious sign that the camera is being used.