Google Glass hits the runway for DVF at Fashion Week

Google‘s smart glasses project has hit the catwalk, with designer Diane von Furstenberg sending models backstage and on the runway wearing Google Glass headsets. Intended to “capture the DVF creative process from entirely new perspectives,” the partnership saw models, make-up artists, stylists, and the designer herself don different colors of the Glass wearable in preparation for the New York Fashion Week show. The eventual results will be combined into a short film, but already there’s a preview gallery available.

In fact, the Glass headsets were posting select images to the DVF Google+ account throughout the show, with various backstage shots of models getting ready (or looking at each others’ bizarre eyewear in apparent bemusement) and then strutting down the runway. The final film – titled “DVF through Glass” – will be released this Thursday, September 13.

“Beauty, style and comfort are as important to Glass as the latest technology” Google co-founder Sergey Brin said of the partnership. “We are delighted to bring Glass to the runway together with DVF.” 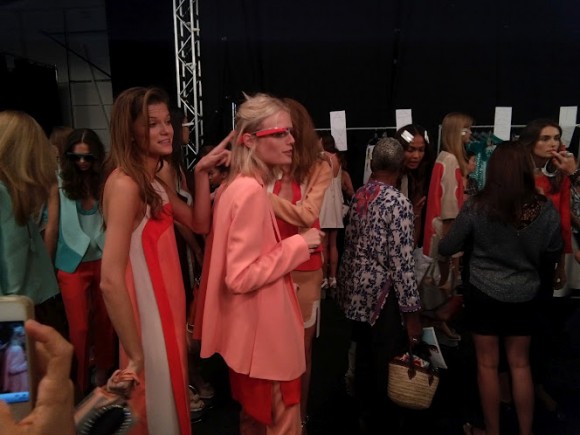 It’s not the first eye-catching stunt Google has employed to bring greater attention to Project Glass. The company staged an incredible skydiving entrance for the wearables at Google IO earlier this year, sending Glass-sporting stuntmen from the skies above San Francisco to land on the roof of the convention center and then stunt-bike their way through the stairways to the stage. Live footage of the whole thing was streamed from the Glass headsets.

Like some of DVF’s more expensive clothes, however, Glass will remain the preserve of the few for a while yet. Google put the initial “Explorer Edition” of the hardware up for preorder at Google IO, price at a not-inconsiderable $1,500 apiece, with shipping expected early in 2013. A consumer version is planned for the market within a year of that taking place.