Google Glass has been facing a lot of criticism ever since the Explorer Edition was released earlier this year. Privacy concerns are the biggest issues surrounding the computerized pair of glasses, getting banned in numerous establishments already, with the most recent banning being Google’s own shareholders meeting.

NOTE: Google has reached out to note that not only was Google Glass not banned from the meeting, more than one attendee wore Glass during the meeting without a problem. See below for more insight.

While below you’ll see information reported earlier today complete with sources that are normally rather trustworthy, it would seem that this particular case isn’t entirely up to snuff. What’s happened here is that the rules posted at this particular meeting “banning” devices such as “cameras, recording devices, and other electronic devices, such as smartphones” were no different from the same set of rules that appear commonly at meetings just such as this.

Take that to heart – and have a peek at how this story was spun rather quickly out of control earlier today:

During Google‘s annual shareholders meeting yesterday, one of the rules was that “cameras, recording devices, and other electronic devices, such as smartphones” were not permitted at the meeting. Essentially, this also put Google Glass out of the running, so attendees weren’t able to wear them in the meeting room.

Obviously, one of the purposes of the rule of no cameras and other electronics during meetings is to protect the privacy of the shareholders, which is quite ironic, since Google defends Google Glass’s privacy concerns and they don’t really think much about it. However, they’re banning Google Glass during shareholders meetings because of privacy concerns. 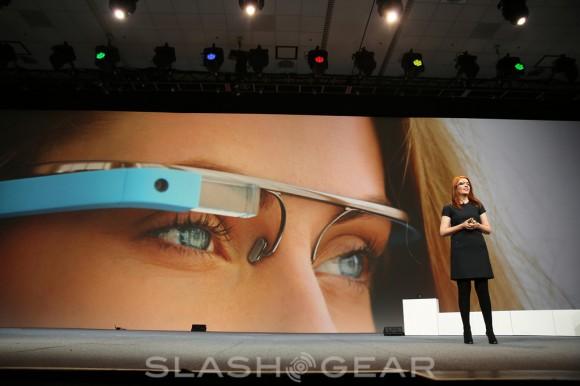 Consumer Watchdog, a non-profit organization, called Google as being hypocrites for the restrictions of Google Glass use during their own shareholders meeting, saying that “Google Glass aids and abets people who want to invade our privacy by videoing or photographing us surreptitiously, but when it comes to their own privacy Google executives jealously guard it.”

Google Glass has already been banned in several places already, including casinos and even bars. Plus, lawmakers are wanting to ban Google Glass while driving, saying that it can be as much of a distraction as texting while driving. It’s still early, so we wouldn’t be surprised if more and more places announced their intent to ban Glass from being used inside.