A developer by the name of Brandyn White has created for Google Glass an augmented reality user interface that will one day be integrated as easy as any other Glassware. This means that while some so-called augmented reality apps created for Glass are still working outside Google’s preferred Glass-friendly software environment, pushing forward with basic Android APKs, this solution aims for a real-deal Mirror API build. Mirror API is a software developer environment unveiled by Google earlier this year made for developers to easily create apps without Google’s supported bounds.

As with Android, Google will be supporting Glass software that falls within a set of specifications. At the moment, to stay within this set – to stay within Google’s Mirror API, that is – White has had to turn this app into a sort of photograph-then-display app as such. In the future it may be possible to display information in an augmented reality landscape in real-time.

At the moment you’ll find Glass taking a photo first, then having it analyzed (as you would if you did a sort of Google Image Search), then having it sent back to the user with data embedded so they can compare to the original vision. It’s hoped that in the future this will all be able to be done in near-real-time without the need for photographs and several-step processing. 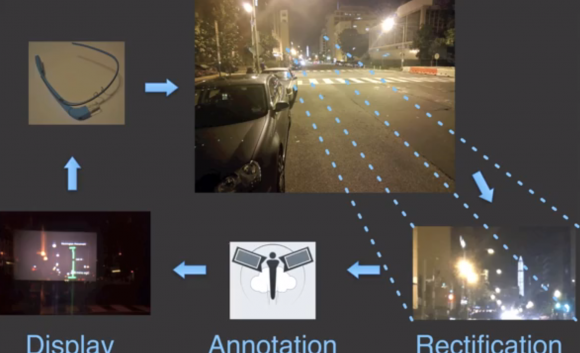 The guide image above shows White’s use of Picarus software for this process, too. This is an analysis system created by White and his colleague Andrew Miller who together create the group Dapper Vision, Inc. This system is made for large-scale visual analysis and both Computer Vision and Machine Learning web services. Picarus is used here to annotate the images fed back to the user once a photo is snapped.

The software included in this augmented reality precursor is included in what White and his colleagues have dubbed “OpenGlass”. This software library known as OpenGlass is, of course, open-source, and can be accessed by any intrepid developer or Glass user hoping to get in on this futuristic build early.