Coming on the heels of its Huntsville, Alabama announcement is new word from Google about its Fiber service: it’ll soon be rolling out in parts of San Francisco, doing so using some existing fiber infrastructure. Google is taking the same route in Huntsville, where it will in part be using the city’s own in-development fiber network to deliver the Google Fiber Internet service. In this case, Google will be using an existing network to bring service to some residents’ homes.

Says Google, it’ll be able to get Fiber service out faster if it uses existing fiber. As such, it is eyeing some condos and apartments in parts of San Francisco, though it says it’ll still be a while before the finer details like availability are disclosed. At this time, Google has not revealed with apartments and condos are in the pipeline to get service; it does say, though, that some affordable housing properties can look forward to it, as well.

In thinking about how best to bring Google Fiber to some residents in this unique city, we considered a number of factors, including the City’s rolling hills, miles of coastline, and historic neighborhoods. 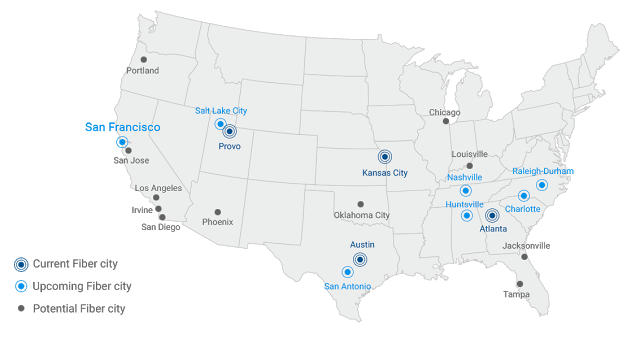 This marks the service’s latest planned expansion, and yet another instance where Google is opting to use existing fiber rather than starting from scratch. That may be a good thing for more reasons than just speed — the company has received a lot of backlash in Austin, Texas, where hundreds of residents have filed complaints about Google’s construction in the city.

The city of Austin has reportedly received more than 200 complaints related to construction underway for the Google Fiber network, with residents citing everything from contractor trespassing to home damage. Residents alleged Google Fiber contractors had left objects that blocked storm drains, making a relatively recent flooding worse, and that lawns have been ruined.