I admit it, I was getting worried. After the original Project Glass concept video promised far, far more than the wearable could deliver, and then the public tidbits from Googlers pointed to little more than a hands-free camera and the occasional email notification, I started to suspect Google had entirely dropped the ball with Glass. Less wearable computer, and more strap-a-Pebble-to-your-face.

Now there’s nothing wrong with making smartphone notifications more useful or easy to consume: that, after all, is why interest in Pebble and other smartwatches has been so high. Yet the initial promise of Glass had been so much more than that, harnessing the power of Android and ubiquitous connectivity and wearer-attention to augment your daily life in persistent ways a smartphone could never manage.

Okay, so the first promo video was ridiculously far-fetched, but as time went on – and the Google team members lucky enough to have access to Glass prototypes teased us with photos, videos, and sky-dives filmed using the headset – it began to look more like Glass was a camera first rather than a wearable computer. Those fears were compounded after early hands-on reports began to trickle out, with talk of little more than email alerts and other notifications dropping into the corner of your vision. 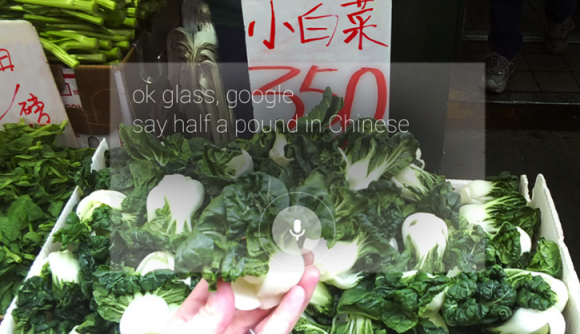 That seemed, frankly, a waste, and so it’s great to see a more realistic explanation of what Glass will do in Google’s new campaign. The display isn’t just a notification pane, it turns out, but a proper screen (albeit transparent) capable of showing Google search results, color navigation directions, and more.

Best of all, it’s very much a two-way stream of information. Glass isn’t just showing you data and then expecting you to pull out your phone to respond to it, as per most smartwatches we’ve seen, but uses voice commands of impressive complexity to operate. The instruction “OK Glass” apparently wakes the headset up, and then you can ask for Google searches, photographs and video, and even for language translations, with the headset discretely whispering the foreign phrases in your ear.

In fact, there’s little suggestion that the trackpad on the side of Glass plays much part, with Google showing only voice commands to navigate through the modified Android OS. It’s worth noting that the video chops together only the key features, however; the actual transitions between them – jumping back to whatever homescreen Glass has, and stepping through pages of search results, for instance – isn’t shown. That may well demand some touchpad stroking. There’s also the question of whether Glass works with touch controls alone, or if you have to give it vocal instructions: that could undermine discrete use of the headset, in situations when speaking out loud isn’t really acceptable. At least one of the pictures Google has freshly released today shows what appears to be an eye-tracking camera on the inside of the eyepiece. 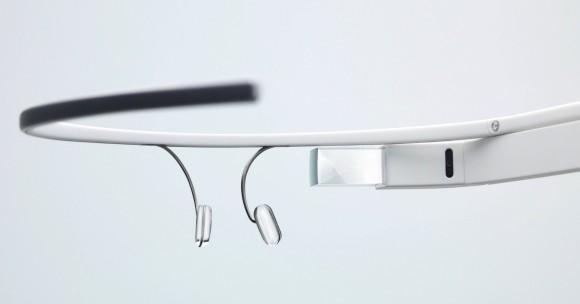 One thing that’s clear already is that this isn’t really “augmented reality“, at least not as we generally conceive of it. Glass doesn’t modify your view of the world, or do any clever floating of glyphs or data around people or objects in your eyeline; it can’t change the way you see things. Instead, it’s more akin to a smartphone that’s been squeezed, extruded, and generally reshaped to fit your face rather than in your pocket: assisting your hunt for digital information, yes, but leaving it up to you as to how it integrates into your life.

Google seems keen to involve more than just developers in the latest round of Glass Explorer Edition presales; whereas only coders had the chance to slap down $1,500 back at Google I/O 2012, this time around the company tells us it’s looking for a more diverse group. In fact, the #ifihadglass campaign doesn’t even require those 8,000 picked to commit to producing their application suggestions. Instead, they’ll be selected on the basis of creativity, the social reach of them having devices (i.e. the scale of the audience they could preach the good Glass message to), and how compelling and original their ideas are.

There’s still plenty to be learned about Glass. Google has teased its cloud-based engine for the headset, but has otherwise said little about the development environment involved, and the biggest concern – battery life – is still conspicuously overlooked anytime the search giant mentions wearables publicly. We also don’t know when the Explorer Edition headsets will be released, though Google tells us that those people who ordered at Google I/O last year are first in line to get their units. Still, the huge amount of “geek” interest bodes well for the commercial launch, whenever that might be, and while Glass may not be the mainstream push for augmented reality we initially expected, the potential is still there to change the way we interact with the world – real, and digital – forever.