GE color-changing LED bulbs to get cozy with Apple HomeKit

The arrival of the Apple Watch and the expected revelation of the so-called iPad Pro, or even rumors of a new Apple TV, may have distracted us from one of Apple’s big iOS 8 reveals last year, but GE definitely hasn’t forgotten. Its interest in smartwatches and tablets only reach as far as these devices’ integration with HomeKit, Apple’s platform for a connected smart home. And GE might be one of the first appliance makers to come out with a product this year, with the promise of intelligent, color-changing LED light bulbs that speak HomeKit’s language.

GE claims that smart bulbs are usually buyers’ entry to the concept of a smart home and there might be some truth to that. After all, it is less anxiety-inducing to install a new bulb than to add, say, smart thermostats or smart door knobs. As such, a GE smart bulb makes the perfect lure for those who are interested in trying out the concept of a smart home as well as put Apple’s HomeKit to the test.

Although HomeKit has been announced way back June last year, it hasn’t exactly taken off even after iOS 8 was launched. Even HealthKit, Apple’s fitness platform, enjoys more attention and support. Word on the industry is that Apple released its specifications to its partners a bit late in the year, hence delays in production of chips and appliances. Nonetheless, the first batch of HomeKit-enabled products are expected later this year, and GE plans to be at the forefront of it.

Aside from connecting with iPads and iPhones for remote control, GE’s LED bulbs have one other talent. That color-changing part isn’t just for show. It’s meant to adjust to a human body’s natural circadian rhythm in order to help them sleep or wake up better. At night, it reduces blue light which is believed to suppress the production of melatonin needed for a restful sleep. Instead, it envelopes the room in amber emulating candlelight. The colors are reversed in the morning.

This is not GE’s first smart bulb, though previous models have been designed to cater to specific apps, like Wink, which work on both Android and iOS. The manufacturer has not yet released details on exactly when the HomeKit LED bulbs will be launched or for how much. 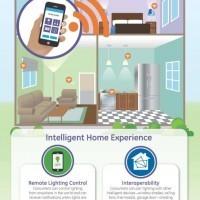