Galaxy Note 7 recall instructions: what should I do?

The Samsung Galaxy Note 7 has been recalled around the world, in all forms, from all generations, immediately and without exception. For those that avoided the recall of the Samsung Galaxy Note 7 in the first place, this will get a little confusing. Instructions issued for the first recall might seem like they’re no longer valid, and shared articles from the first wave might end up being dismissed by consumers with the newer “Green Battery” version of the device. Let SlashGear assure EVERY SINGLE Galaxy Note 7 user in the world: there is no exception to the rule. Every single Samsung Galaxy Note 7 needs to be turned off and returned to Samsung IMMEDIATELY.

The Galaxy Note 7 has a manufacturing defect which can – and has, several times – make the device start on fire. Not just get hot. We’re talking fire shooting out of the device, setting aflame objects near it, too.

“We are working with relevant regulatory bodies to investigate the recently reported cases involving the Galaxy Note7. Because consumers’ safety remains our top priority, Samsung will ask all carrier and retail partners globally to stop sales and exchanges of the Galaxy Note7 while the investigation is taking place,” said Samsung in a statement.

“We remain committed to working diligently with appropriate regulatory authorities to take all necessary steps to resolve the situation. Consumers with either an original Galaxy Note7 or replacement Galaxy Note7 device should power down and stop using the device and take advantage of the remedies available.”

There is no Galaxy Note 7 out in the wild that should be kept. The whole lot should be considered ticking time bombs which only Samsung should be handling and disposing of.

Call – with a DIFFERENT PHONE, not the NOTE – the following number: 1-800-SAMSUNG – that’s 1-800-726-7864. While we would normally also suggest emailing product support, there have been a few issues, likely having to do with the massive bulk of emails being sent on this subject at any given time.

Users that ordered the Galaxy Note 7 online from a source other than Samsung should contact that source if Samsung does not immediately respond.

Given the unprecedented nature of this recall, we would not be surprised to find Samsung’s help line quite busy at the moment.

Users that’ve purchased their Galaxy Note 7 at a physical store location should go to that store immediately with the device to return or exchange.

Can I just email?

Those that’ve skipped reading above will want to know Samsung‘s email for support. Straight from The Verge comes an apparent support email sent to a Galaxy Note 7 user looking for email support. 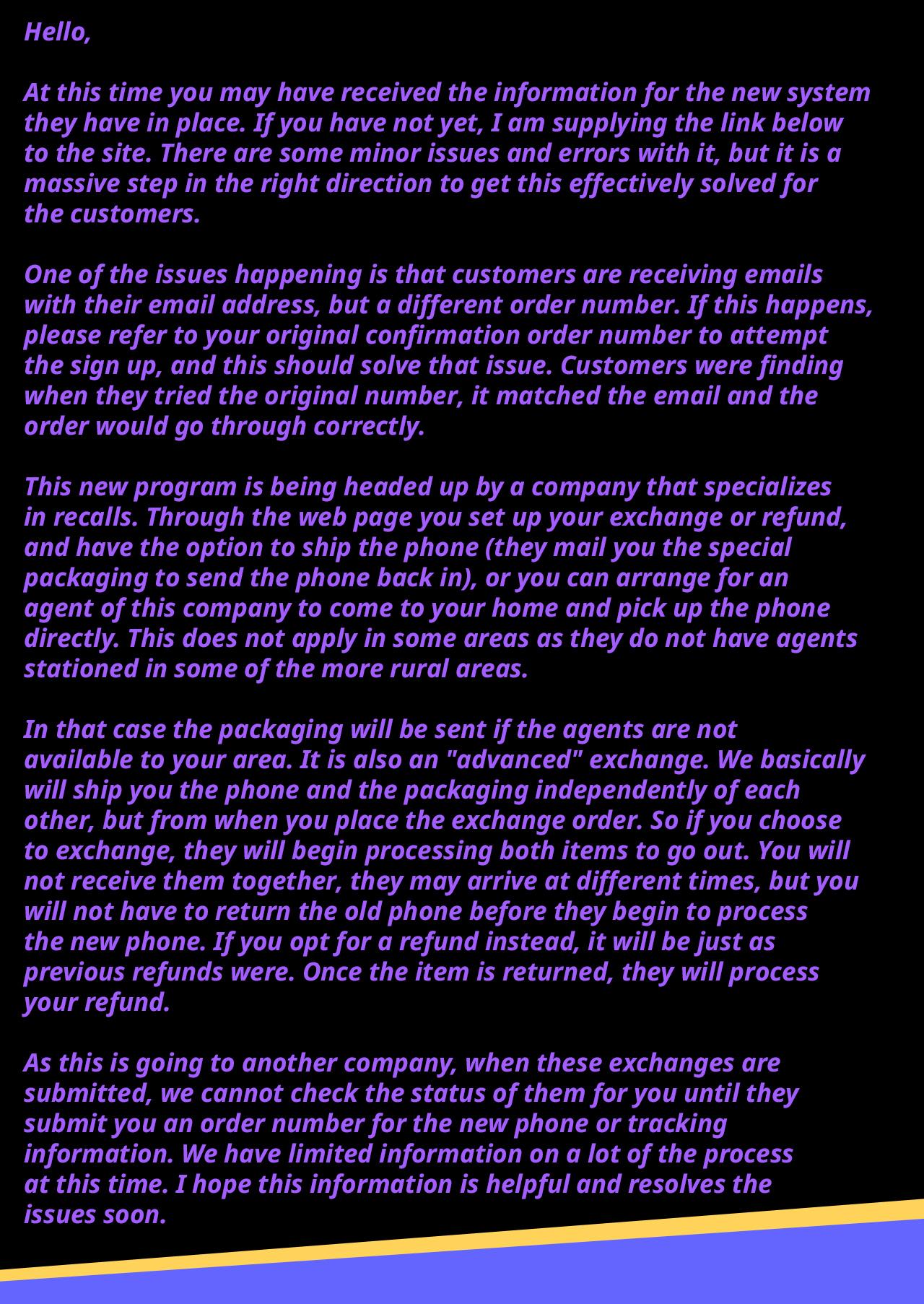 While this email might seem bonkers the first read through, consider the idea that it was actually part of talk between support consultants, and that they’re planning a more comprehensive recall for this device right this minute.

Samsung could – and very well should – be using a 3rd-party recall group to handle this recall with the details semi-explained above – with the specialized containers and whatnot. But for now, that information is not as solid as the original recall info which simply suggests users return their device to its place of purchase.

Should I wrap it in tin foil? 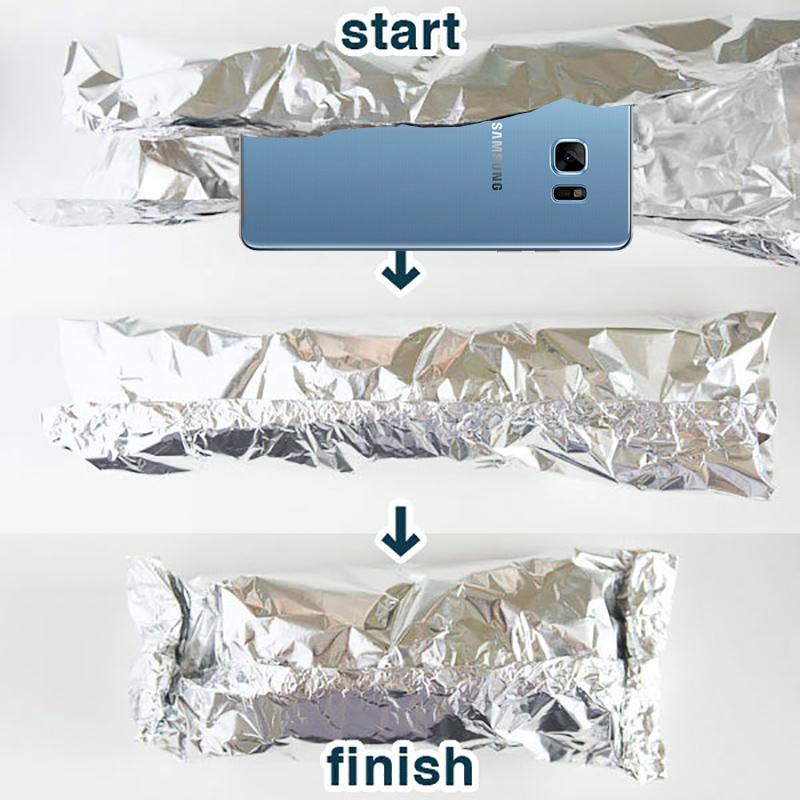 Placing the device in a tupperware container for its journey back to the store might not be the worst idea in the world. 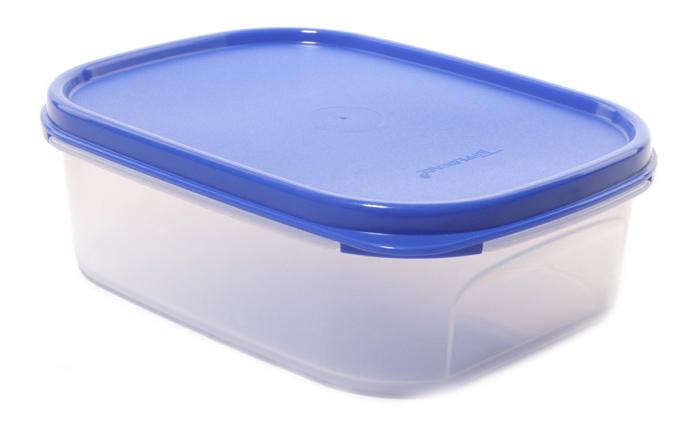 Do not, under any circumstances, place additional weight or pressure on the Galaxy Note 7. While Samsung has not released information on the exact cause of the fires at hand, clues seem to point toward too much pressure having been placed on the battery in the device during manufacturing.

What about my Samsung Galaxy S7?

While no cases of fire have been reported yet – or at least have not been made public – it might not be a half-bad idea to keep an eye on one’s own device for excessive heat. The same goes for the Galaxy S7 Edge which, again, has not yet exhibited similar fire-blasting tendencies.

Normally we might not be so wary, but this time people have been burned, literally.

Have a peek at our Galaxy S7 recall report if there’s any major doubt.