Availability on the Samsung Galaxy Note 10.1 2014 edition begins in the United States on the 10th of October, while the name suggests that Samsung will be starting the Automobile-structure naming-scheme for devices right here in 2013. While the 2014 model of the Samsung Galaxy Note 10.1 will be ready to roll in its Wi-fi-only edition here in the United States starting next month, there’s a good chance it’ll stay the hero of tablets for Samsung for another year from now.

Just as it is in the automotive industry, users in the smart device universe want to put their hands on the newest and hottest tablets and smartphones the likes of brands like Samsung have to offer. Thusly a naming structure like the one Samsung is pushing today makes a whole lot of sense. No sense in waiting until 2014 to name your device after the year it’ll be taking command over. 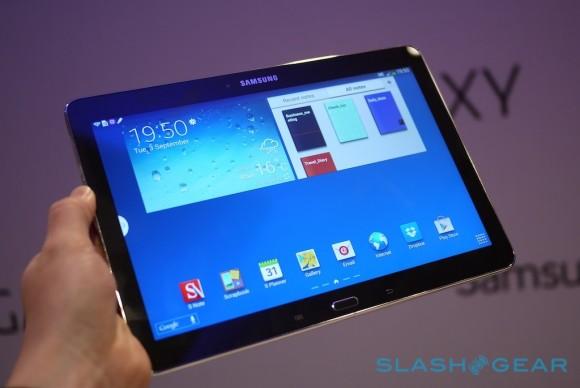 This 2014 edition of the Galaxy Note 10.1 works with an Exynos 5420 quad-core processor and 3GB RAM for next-level performance, and will be appearing with multiple windows (on-screen split) with the ability to launch – for example – YouTube and a web browser at the same time, side-by-side. This ability is not brand new, as previous editions of the Galaxy Note did see software updates to include this multitasking environment, but here it’s ready to roll right out of the box.

Pricing on the Wi-fi-only edition of the Galaxy Note 10.1 2014 edition starts at $549.99 for the Classic White or Jet Black 16GB internal storage version. You’ll find the same colors available in a 32GB edition for $599.99 – we’ll see how the 4G LTE editions ring up later this season. Stay tuned for the full SlashGear review as well!