Don’t fill up Google Photos or Gmail will stop working

Today I received a rather rude awakening – after years of abusing the space Google had given me for online storage, my ticket had come up. I’d been uploading files to places like Google Drive and Google Photos at full resolution, without a care in the world, doing so every day, automatically, without a care in the world! The mortality of this freedom became all too real to me today. Today, Google gave me a rather scary warning. If I didn’t make some space, they’d stop my emails.

I should have known, really. I could have heeded the warnings. Google uses the same storage for three of my most majorly used accounts: Google Photos, Gmail, and Google Drive. Once the lot of these had been filled with data, Google had every right to stop me from uploading more. 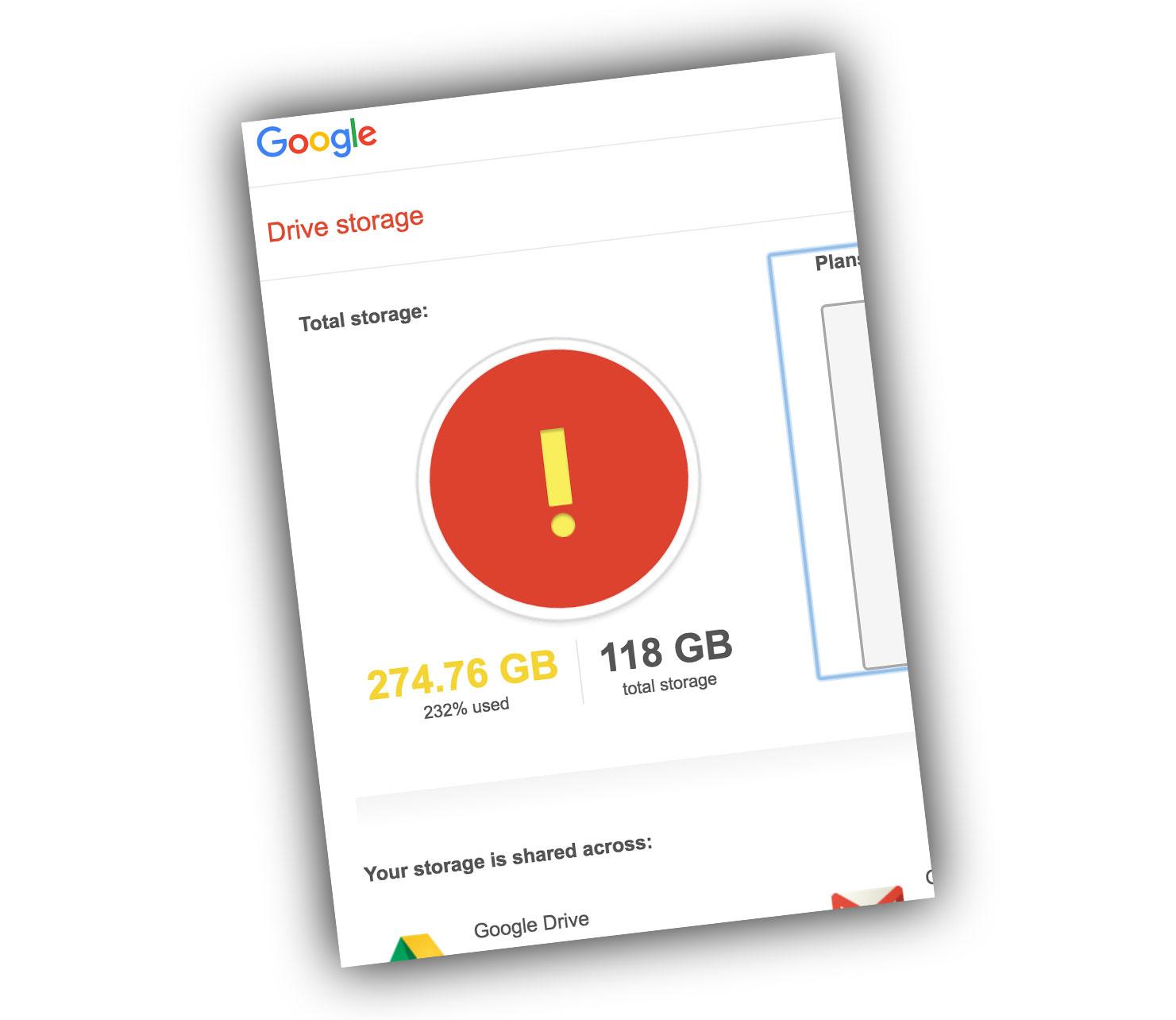 “But wait,” you might be saying, looking at the screenshot above, “how on Earth did you accumulate THAT MUCH data over your limit?”

There are several ways in which this can happen.

1. I could have had a paid account and let payment lapse. If I’d done this, I’d see this same storage conundrum.

2. I could have partaken in a number of “X amount of GB of Google cloud storage space for free for 2-years” offers. Why would I ever turn one of these offers down?

In my case, it was option number 2.

Amazon does something similar.

I’d reviewed my fair share of Chromebooks a few years ago and with each new review came another bunch of GB of space. I became foolish with the embarrassing amount of GB of cloud storage I’d acquired. I’d turned on automatic uploads on every review unit smartphone I’d reviewed in that time as well – so many photos. So many videos. So many uploads.

I received an email from Google Photos which said:

“Photos uses Google Drive to store your photos & videos. Without additional storage:
• Photos backs up your items at high quality
• You can’t save files to Drive”

I’d set Google Photos to save photos at “Full Quality.” All that is over now!

The scariest of all messages appeared above my Gmail window in Chrome – there was the following message!

“You’re out of storage space and will soon be unable to send or receive emails until you free up space or purchase additional storage.”

I went about deleting old emails with attachments – not that there were many of them. Just a few thousand.

I moved on to Google Photos to delete all the stray videos (which took up the majority of my space in Google Photos).

There it became apparent that just deleting every stray shared file I’d had from the past several years wasn’t going to be enough. It wasn’t a matter of deleting the largest files. My space was being taken up by massive amounts of small files.

Files that’d accumulated bit by bit, tiny file by tiny file, creeping up like an itch, only to overwhelm me and the rest of my accounts like a storm. A sudden, terrible storm. A storm that stops emails.

Now I begin my journey through these files, making certain they’re deleted, transferred, or existing in under my storage limit.

Heed my words, friends: don’t get greedy, like I did.