Forget mobile payments, real-life Mario Kart is the best use ever for RFID

Nintendo’s Reggie Fils-Aime may have straddled a full-sized Mario Kart replica for publicity, but Waterloo Labs‘ DIY version goes several steps better with actual gameplay dragged out from the console to the race track. Taking four regular go-karts, and then strapping on RFID readers, pneumatic launchers, and various servo-controls of the steering and throttle, the real-life drivers can boost their performance by grabbing RFID-tagged boosters hanging over the course, and sabotage rivals by shooting at them.

Just as in the classic SNES racing game, different items around the track have different effects on the go-cart. Get a mushroom, for instance, and the speed of the Mario Kart is boosted for five seconds, having been artificially limited to 75-percent of full throttle. 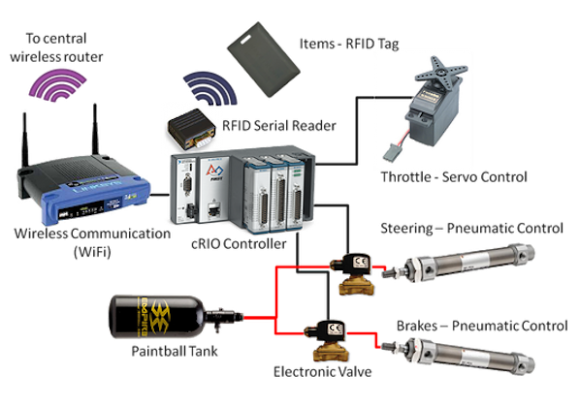 However, the RFID-tagged plastic bananas cause the pneumatics to automatically lock up one side of the steering for three seconds, causing the go-cart to swerve uncontrollably. Since all of the carts are hooked up wirelessly, some items can apply a penalty to all the other drivers when collected, for instance automatically slamming on their brakes. 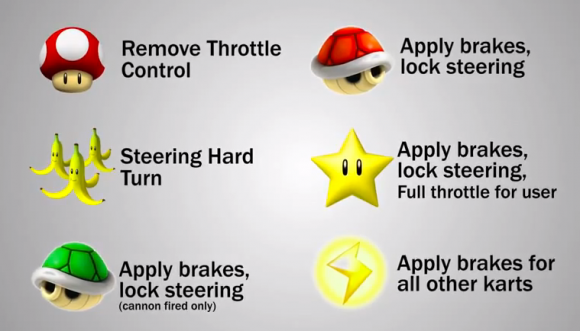 A 120psi cannon on the side of each of the carts can be used to blast other drivers, again causing their brakes to lock or their steering to go wonky. Unfortunately, the Mario Kart race track Waterloo Labs set up was only temporary, but the team has released the source code in case you have the space and inclination to build your own.