Ford will team up with GE Healthcare to build more ventilators suitable for COVID-19 treatment, with the potential to produce 50,000 of the simplified design in the next 100 days. The automaker had already announced a collaboration with GE Healthcare on ventilator production, this time targeting an even easier design currently being produced in Florida.

The GE/Airon Model A-E ventilator has FDA-approval and, unlike many ventilators, requires no external power in order to work. Instead, the system – which is designed to support a patient struggling to breathe on their own, such as when infected with coronavirus – relies solely on an oxygen supply to operate.

That makes it simpler and cheaper than other ventilators, though no less valuable. GE flagged the design to Ford last week, with the healthcare company licensing the current hardware from Airon, while the automaker provides its manufacturing capabilities. Initially, Ford will send employees to work with Airon to boost production at its facility, but by the week of April 20 the goal is to have Ford’s Rawsonville Components Plant in Ypsilanti, Michigan building the hardware. 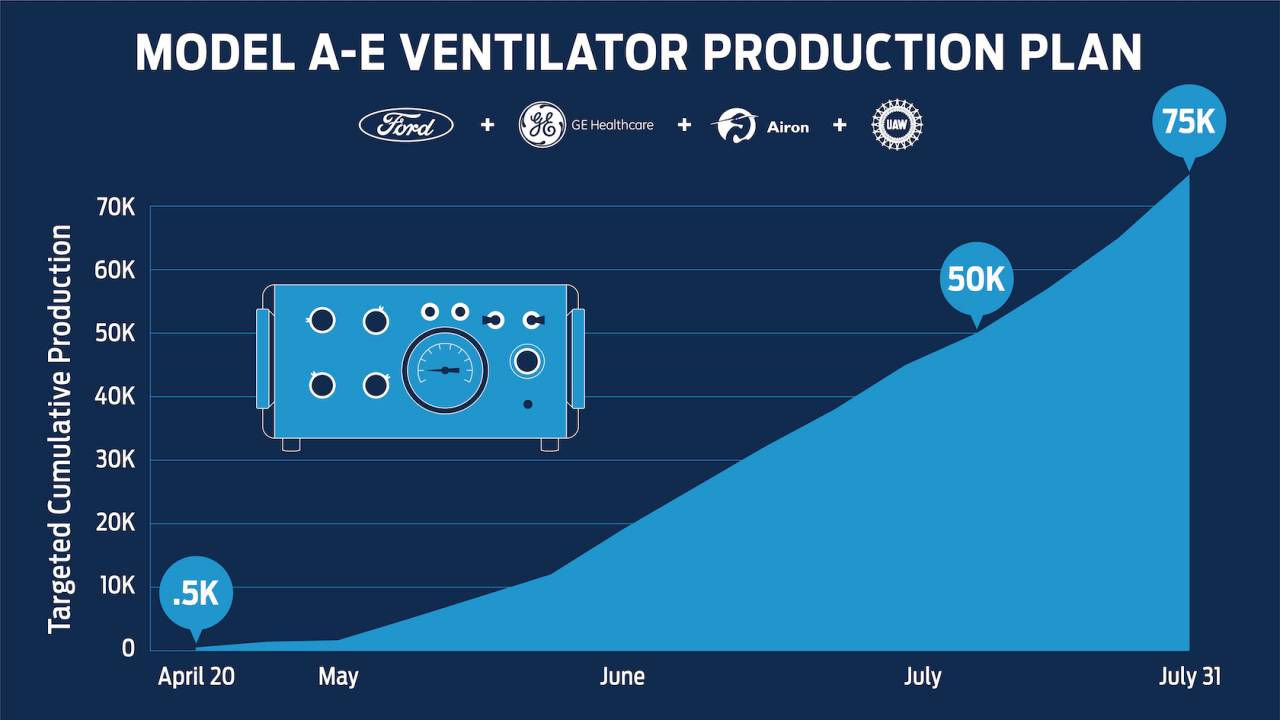 “GE Heathcare and Ford consulted with medical experts in determining the Airon-licensed Model A-E ventilator is well suited for COVID-19 patient care,” the automaker said in a statement today. “The design is expected to meet the needs of most COVID-19 patients with respiratory failure or difficulty breathing. The ventilator is designed for quick setup, making it easy for healthcare workers to use – and can be deployed in an emergency room setting, during special procedures or in an intensive care unit, wherever the patient may be located.”

At the same time, Ford is already collaborating with GE Healthcare on a different ventilator. Announced last week, it’s another simplified design that has been tailored to be compatible with Ford’s existing facilities.

Automakers have been quick to turn their hand to medical device production, vehicle manufacturing having already been shut-down amid the coronavirus pandemic. General Motors announced last week that it was working with Ventec Life Systems on a ventilator, for example.

Ford’s team will consist of volunteer employees, who will be paid to operate three shifts so that the Rawsonville plant can be run almost around the clock.