GM will turn over one of its US plants to producing ventilators, with the automaker partnering with Ventec Life Systems to build new healthcare equipment amid the coronavirus pandemic. The Kokomo manufacturing facility in Indiana will begin making ventilators – one of the biggest bottlenecks in healthcare amid the COVID-19 outbreak – from next week and expects the first shipments to arrive “as soon as next month,” though points out that it is all dependent “on the needs of the federal government.”

The ventilators themselves – which support patients who are struggling, or unable, to breath while in respiratory distress or failure – will be FDA-cleared. Ventec will continue to build ventilators at its Bothell, Washington facility.

In particular, it’ll be the Ventec critical care ventilator, the VOCSN, that is coming off GM’s lines. That demanded special tooling at the Kokomo plant, and GM has deployed roughly an additional 1,000 American workers to scale production. “GM is donating its resources at cost,” the automaker says.

Initially it’ll be April before the first ventilators are produced. Eventually, the two companies say, there should be the potential to produce more than 10,000 units per month, “with the infrastructure and capability to scale further.”

It’s not as easy as simply setting a row of robots to work with different programming, mind. GM and Ventec had to collaborate on sourcing the 700+ individual components that go into each ventilator, and ensure that there would be enough capacity in the supply chain for up to 200,000 units of the VOCSN.

The announcement comes as US President Trump took to Twitter to complain, vocally, about GM’s ventilator plans. Criticizing GM CEO Mary Barra for the timescale at which medical equipment could be delivered, Trump demanded that “General Motors MUST immediately open their stupidly abandoned Lordstown plant in Ohio, or some other plant, and START MAKING VENTILATORS, NOW!!!!!!” 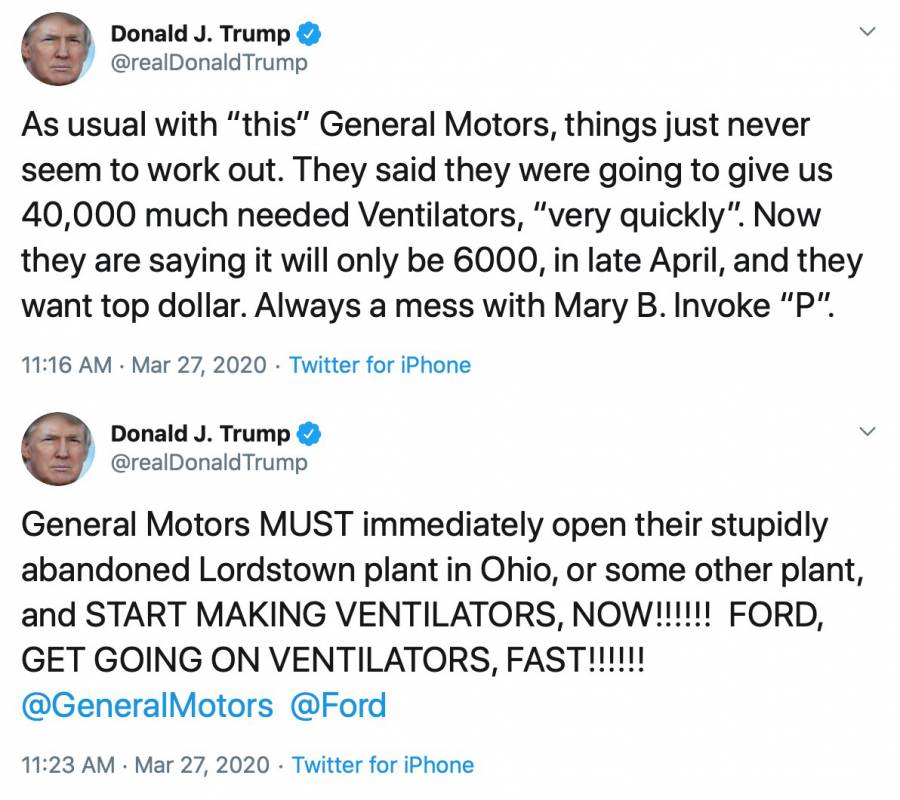 It’s unclear if the President is aware that General Motors no longer owns the Lordstown Assembly complex, which the automaker shut down in March 2019. The facility was sold in early November last year to Lordstown Motors. That startup intends to use the plant to build an electric pickup truck, though has not yet started production.

Trump also threatened to use the Defense Production Act of 1950, a federal law which compels private companies to assist in matters of national defense. So far, the President has proved reluctant to implement the Act, despite many requests by State governments and others to do so. Yesterday, in an appearance on Fox News, Trump downplayed the need for new ventilators.

“I have a feeling that a lot of the numbers that are being said in some areas are just bigger than they’re going to be,” Trump told Fox host Sean Hannity. “I don’t believe you need 40,000 or 30,000 ventilators. You go into major hospitals sometimes, and they’ll have two ventilators. And now all of a sudden they’re saying, ‘Can we order 30,000 ventilators?'”

It’s unclear what caused the abrupt turnaround in the President’s thinking overnight.

Ventilator shortages and efforts to alleviate that situation are underway in multiple countries. In the UK, for example, Dyson, McLaren, and Airbus are all looking at how the breathing-assistance machines could be produced more rapidly. Both GM and Ford in the US have been exploring the possibility, including experimenting with using car components like seat cooling fans to replace healthcare parts.

Update: Several hours after General Motors announced it was beginning ventilator production next week, the White House issued a statement confirming it would be using the Defense Production Act to require the automaker to produce the healthcare equipment:

“Today, I signed a Presidential Memorandum directing the Secretary of Health and Human Services to use any and all authority available under the Defense Production Act to require General Motors to accept, perform, and prioritize Federal contracts for ventilators. Our negotiations with GM regarding its ability to supply ventilators have been productive, but our fight against the virus is too urgent to allow the give-and-take of the contracting process to continue to run its normal course. GM was wasting time. Today’s action will help ensure the quick production of ventilators that will save American lives.”