Our Titanfall Review is nearly 5000 words long. It’s not your everyday average game review, and not something you’re likely to read the entirety of unless you’re either seriously torn about the game or you’re overly-obsessed. What we’re doing here in the aftermath of that article’s release is taking you down a slightly easier-to-digest path, a sort of “Titanfall for the Gamer on the Go”, if you will.

Each of these points has just as much to do with Titanfall for Xbox One as it does for Titanfall for PC through Origin. Both games are nearly identical, save their graphics prowess and controller abilities, and the fact that players on one platform will not be facing off against the other. Also of note if you happen to have both: there’s no cross-platform saving at this point. You’ll have to level separately on each machine.

5. Melee Attacks are a powerful alternative to guns

Sure there’s one massive amount of ballistics in Titanfall, but there’s also some next-level melee to be experienced as well. Both Pilots and Titans are able to bash one another about without the use of guns, employing their arms and/or their legs to take out opponents.

One half of this equation is kicking or executing your opponent as a Pilot. Melee from a Pilot to a Titan is useless – don’t try it. If, on the other hand, you sneak up behind a Pilot (as a Pilot) and are able to get real, real close, press the right joystick (on Xbox One) or “C” on your keyboard. You’ll perform an execution, twisting their head off. This same button from the front initiates a kick – literally your boot to their face, also resulting (more often than not) in their death.

Titans have a similar setup, only there are two ways you can smack. One is a Titan jostling another Titan – essentially a big push. The other is a massive Titan punch, which you’ll see here. 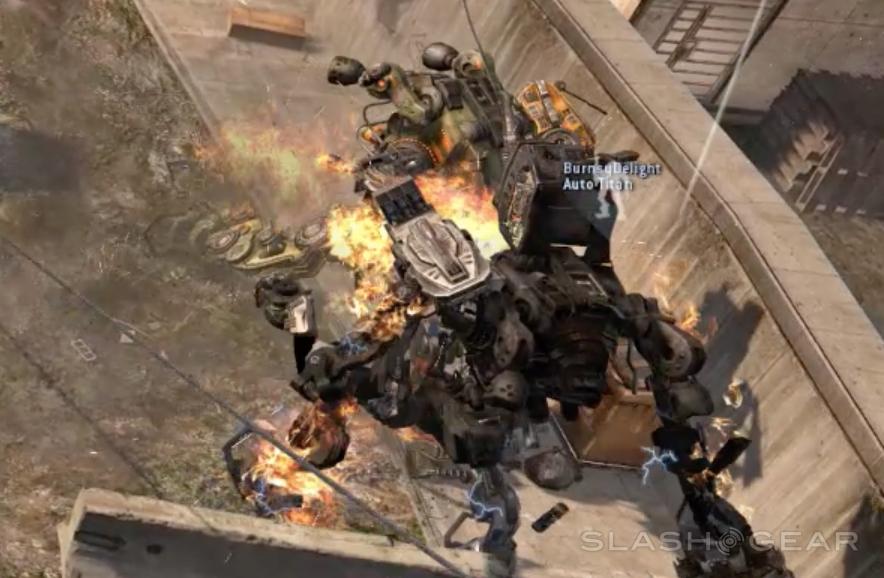 Above you’re seeing an opponent’s Titan take out our unmanned (auto piloted) Titan with a melee attack. If we were in the machine, this could have also resulted in the enemy Titan literally pulling us out from our Titan and smashing us.

4. Your Pilot can ride a Titan – friend or foe

If you run up to a Titan – provided you can get there without being stepped on or blasted – a simple jump up and towards the machine will (often) result in you “Rodeoing” your enemy. A rather swift animation – one of a number we’ve not seen the end of (or at least haven’t seen repeat) – shows you grab and pull onto the Titan you’ve aimed for. From there you can either ride along or destroy. 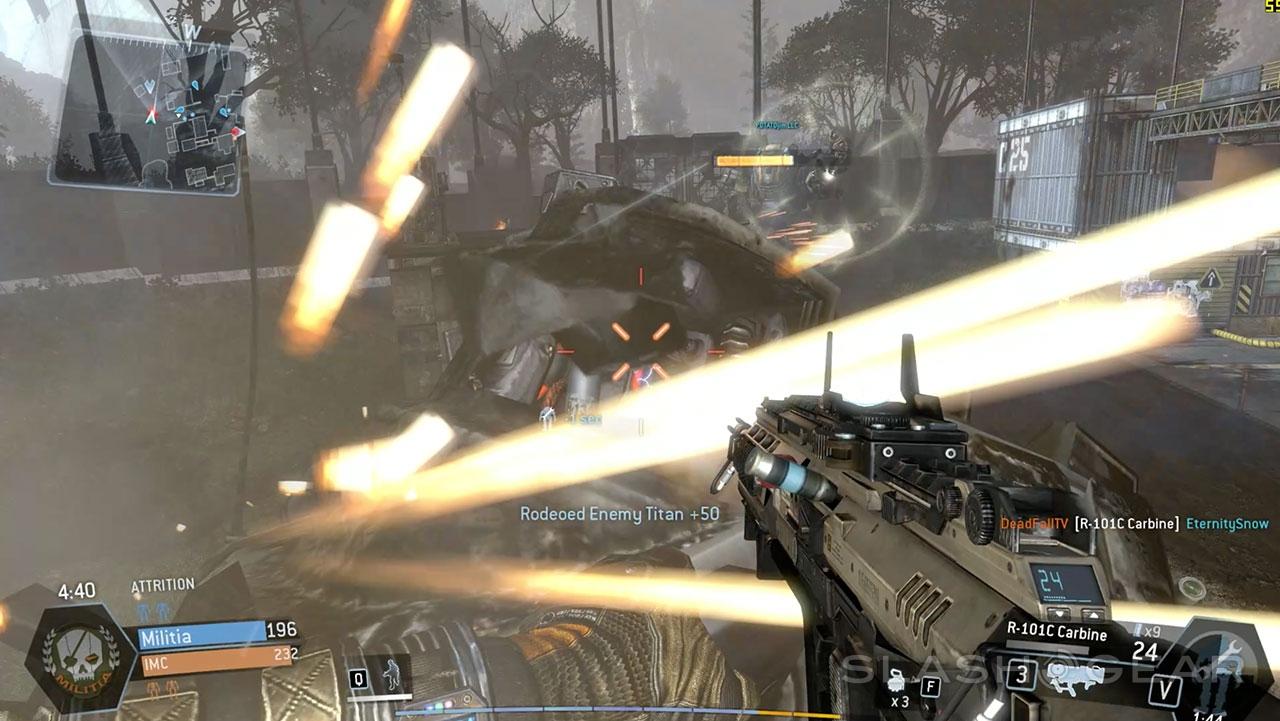 If you’ve Rodeoed your opponent, you’ll immediately start tearing away a key piece of the Titan’s shielding, revealing a particularly weak spot in their armor for you to shoot. If you Rodeo a friendly Titan, you’ll be able to ride along and shoot every which way but forward. You won’t damage this friendly Titan if you shoot it, but you won’t do any good up there unless you’re firing at enemies, either.

Of note is the fact that you can not Rodeo your own Titan. Even if your Titan is in auto mode (Follow or Guard mode without you in it), jumping at it will just have you slipping back down. You can jump aboard another Titan while your Titan is following you – this can result in a Titan train – your friend leading the way – or a double team – your Titan firing at your enemy from the front while you take it out from above.

3. Experience points can be gained creatively

You can potentially gain thousands of points in your first round of play, supposing you’re especially good at the Rodeo element. Take some cowboy lessons and saddle up!

2. Stay off the Ground

If you plan on enjoying Titanfall, we suggest you get off the ground as soon as possible. This is the same advice the developers of the game, Respawn Entertainment, gave the world before the game was released. Jump up, double-jump in mid-air, and wall run to your heart’s content.

Find a friendly corner and leap back and forth until your at the top of a high tower, and jump back down, guns blazing. Take aim as a sniper from up high, or summon your Titan to take that elusive tower-sitter out. An Ogre will be especially good at this, as it’ll be able to take the punishment as they fire back. Run, jump, and fire.

1. This game is addicting

As suggested by Penny Arcade, we can’t help but hope that crashing is a feature of this game* so we’re able to sleep at night. It’s officially Day 1 when this article is first posted, and you’ll already see level 30+ Pilots out there. This has a bit to do with early or otherwise accidental releases, but it also has to do with the fact that more than a few players have found it especially difficult to stop playing for long periods of time.

*Crashing really isn’t a feature of this game – in fact we’ve had nothing but the best of luck getting online and staying there for as long as we’ve played the game, with both Xbox One and PC through Origin.

So stop every once in a while, for the love of Ogre. Give yourself a break and watch the trailer for that upcoming Titanfall mini-movie series, and have a glass of water. Then join back up and see if you can find us – I’m known as BurnsyDelight on Xbox Live. We’ll be waiting for you there.