Wearables like Google Glass may be eye-catching, but it’s tiny fitness monitors like Jawbone UP, Nike Fuelband, and others that are actually showing up clipped or strapped to people, and that’s the market Fitbit is chasing with the new Flex. We grabbed some hands-on time with the new Bluetooth 4.0 equipped activity dongle – and its companion smartphone app – at CES to see if it could oust UP from our wrist.

It’s certainly small. While Fitbit has been focusing on Flex as used with a wristband, the dongle itself can be removed and used with another type of clip; when out, it’s a small, sturdy lozenge of plastic. On the outer edge there’s a discrete row of LEDs which show your progress toward your daily goal in 20-percent increments; it’s a nice balance between the fuller (but battery-consuming) display of the Fuelband, and the UP which gives no feedback whatsoever until you plug it into your phone. 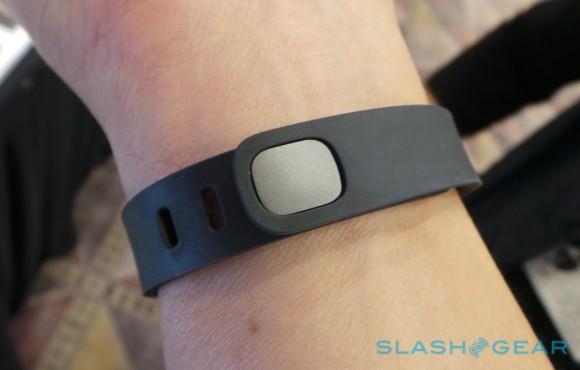 The strap itself fixes on snugly, and Fitbit will supply two sizes to suit different wrists; it’ll also be available in a range of colors, depending on whether you want a more discrete black, or prefer something eye-catching like bright red.

It’s the app and the Bluetooth that really make Flex special, however. The low-power Bluetooth – when used with the right phone – sends over performance data in real-time to your device, allowing you to monitor how you’re going through the day. It also records sleep patterns, showing different light or deep phases, and telling you if you’ve had a rough night.

All in all, we’re left with warm, fuzzy feelings about the Flex, and even though Fitbit is later to the market with it than Nike or Jawbone, the company appears to have learned from its forebears with elements like the battery-sipping LEDs and the water-resistance. It’s up for preorder now, priced at $99.99, and will ship in the spring.