Ferrari just gave us a glimpse of its hybrid supercar tech

Ferrari might not be the first automaker you’d associate with a hybrid engine, but the famed Italian supercar-maker has cooked up an innovative new electric turbocharger that could deliver both performance and an iconic soundtrack. It’s another sign that, though Ferrari has been cautious about electrified sports cars, the automaker isn’t dismissing the idea out of hand.

One of the lingering concerns some high-end automakers have had about electrified supercars is the emotional connection. Maserati – which has used Ferrari engines for its recent performance cars – flagged aural shortcomings as a primary concern about sports EVs, for example. Ferrari CEO Sergio Marchionne, meanwhile, said last year that in the face of the Tesla Roadster the automaker couldn’t avoid electrification, but promised the company would ease its way into the segment in a distinctly “Ferrari” way.

A possibility is outlined in a recently-published European patent application, spotted by AutoGuide, describing a potential electrically-operated turbocharger. Intended to be deployed in a supercharged internal combustion engine, the turbocharger could not only compress air that would be used to help drive the engine, but also power electric motors on the wheels. 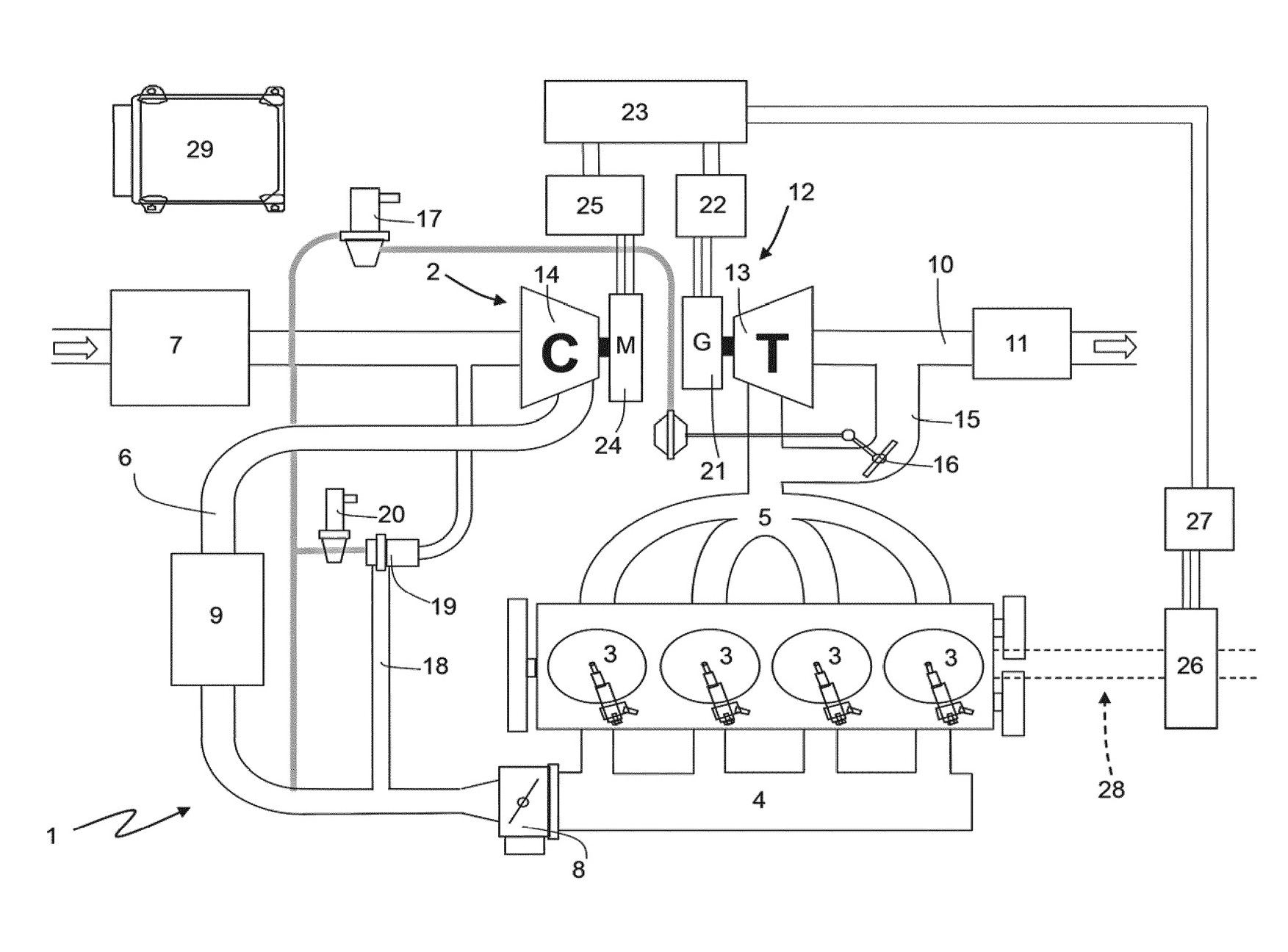 While electric turbochargers aren’t new, Ferrari’s implementation would be. Typically, a turbo is used to compress air and force more into the engine, using exhaust gases from the engine itself to drive it. Some automakers have used electric turbochargers, which rely on electric motors to spin the turbo up rather than exhaust pressure, and thus react faster.

What Ferrari is describing, though, wouldn’t have a mechanical connection between the turbine wheel installed in the exhaust ducting and the compressor. Instead, the turbine would act as an electrical generator, with the car storing that power in a battery and then able to selectively apply it either to an electric compressor, or directly to electric motors for the wheels. It’s worth noting that, though Ferrari’s patent shows a four-cylinder engine in the above diagram, that doesn’t imply this could only be applied to such an engine.

However many cylinders, the system could have serious performance advantages but it might also help the car sound better, too. Ferrari points out that, since it could adjust the speed of the turbine wheel, it could effectively tune the soundtrack’s tone. Even if the desire for pleasing sound wins out over producing more power, and the turbine speed is lowered, the battery could act as a stopgap to keep the compressor and the electric drive running.

It’s not Ferrari’s first flirtation with electrification, mind. The FXX-K “kinetic-hybrid” back in 2014, for example, coaxed 1,036 horsepower from its combination of a V12 gas engine and an electric motor. Intended only for track use, it could deliver 0-60 mph in 2.4 seconds, though only forty of the cars were actually produced.

The LaFerrari, meanwhile, took electrification to the road. Produced in limited numbers between 2013 and 2018, it too used a V12 gas engine and electric motor pairing, and effectively distilled the FXX-K’s technology into a more usable vehicle. It delivered 950 horsepower and 664 lb-ft of torque, and could match the racer’s performance.

According to Ferrari’s patent application, the upshot of the electrified turbocharger system would be a more responsive, flexible car. At lower speeds, where turbochargers can experience turbo lag as the exhaust pressures aren’t sufficiently high, the battery system could weigh in. Meanwhile, it could deliver better economy, and avoid accusations of “soulless” driving sounds on the road. Whether this will be Ferrari’s hybrid implementation of choice, though, remains to be seen.