This morning a court has struck down the FCC‘s ability to enforce certain key “Net Neutrality Rules” on companies that would favor certain kinds of web traffic over others. That’s what Net Neutrality protects the public against, after all: with a “neutral” law in place, all web data is treated equally. Without these rules in place, companies that provide web connectivity are able to legally place restrictions on some content while making other content run faster – whichever they do so choose.

This ruling was made by an appeals court in Washington with two judges ruling in favor of the measure and one ruling against. As the folks at GigaOM mention, there is a possible positive side to all of this – sort of. If larger content providers wanted to provide cash to certain internet providers to instill additional hours of attention to their content delivery, they could now do so.

For example if Netflix wanted to pay a load of cash to Comcast to provide them as much bandwidth as possible. The downside is that this could mean that startup companies would not see nearly the amount of attention from data providers as the larger groups would, potentially creating a bit of an uneven slide – as illustrated in the TRON Light Cycle image above. 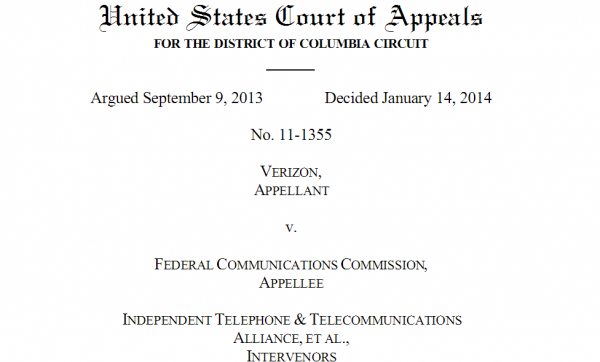 That said, even though the Commission has general authority to regulate in this arena, it may not impose requirements that contravene express statutory mandates. Given that the Commission has chosen to classify broadband providers in a manner that exempts them from treatment as common carriers, the Communications Act expressly prohibits the Commission from nonetheless regulating them as such.

Because the Commission has failed to establish that the anti-discrimination and anti-blocking rules do not impose per se common carrier obligations, we vacate those portions of the Open Internet Order.

Above you’re seeing just a bit of the full 80+ page document handed down this week in the face of the FCC by this court. This is no small ruling, and is likely to be taken to a higher court, then a higher court again if they see a similar ruling. Net Neutrality could be over right this minute, but it’s far more likely the FCC will bring this one up all the way to the top.