The Facebook Oversight Board has found the social network was right to restrict former President Trump’s account in early January 2021, though has insisted on a review of the indefinite suspension the then-President faced on Facebook. The results of the hotly-anticipated – and undoubtedly divisive – Oversight Board investigation centered on Facebook’s reaction to incendiary posts by Trump during the DC Capitol Building riot on January 6.

Then, while the 2020 election results were still being contested, an insurrectionist mob forcibly entered the Capitol Building in Washington, D.C. Five people died, and more were injured. Multiple investigations into the attack are underway, with the FBI having already charged numerous people for their role in the violence.

Trump posted twice on Facebook, doubling-down on the false allegations of election fraud. Facebook removed them both, for violating the Community Standard on Dangerous Individuals and Organizations. In the evening of January 6, it blocked Trump from posting for 24 hours.

On January 7, following further review, Trump was blocked from Facebook “indefinitely and for at least the next two weeks until the peaceful transition of power is complete.” Facebook referred the case to the independent Facebook Oversight Board on January 21, a day after President Biden was inaugurated.

“The Board found that, in maintaining an unfounded narrative of electoral fraud and persistent calls to action, Mr. Trump created an environment where a serious risk of violence was possible,” the Oversight Board said today. “At the time of Mr. Trump’s posts, there was a clear, immediate risk of harm and his words of support for those involved in the riots legitimized their violent actions. As president, Mr. Trump had a high level of influence. The reach of his posts was large, with 35 million followers on Facebook and 24 million on Instagram.”

While the suspension of Trump’s account was justified, it concludes, what was not was the “indefinite” suspension. That is something not included in current Facebook content policies, which call instead for a time-bound period of suspension, the permanent disabling of a page and account, or removing the violating content. Facebook had asked the Board to make a recommendation there, effectively punting the decision to the advisors. The Oversight Board, though, wasn’t going to play along.

“In applying a vague, standardless penalty and then referring this case to the Board to resolve, Facebook seeks to avoid its responsibilities,” the Oversight Board concludes. “The Board declines Facebook’s request and insists that Facebook apply and justify a defined penalty.”

Facebook now has six months to “reexamine the arbitrary penalty it imposed on January 7 and decide the appropriate penalty.” During that time, Trump’s account can remain suspended. 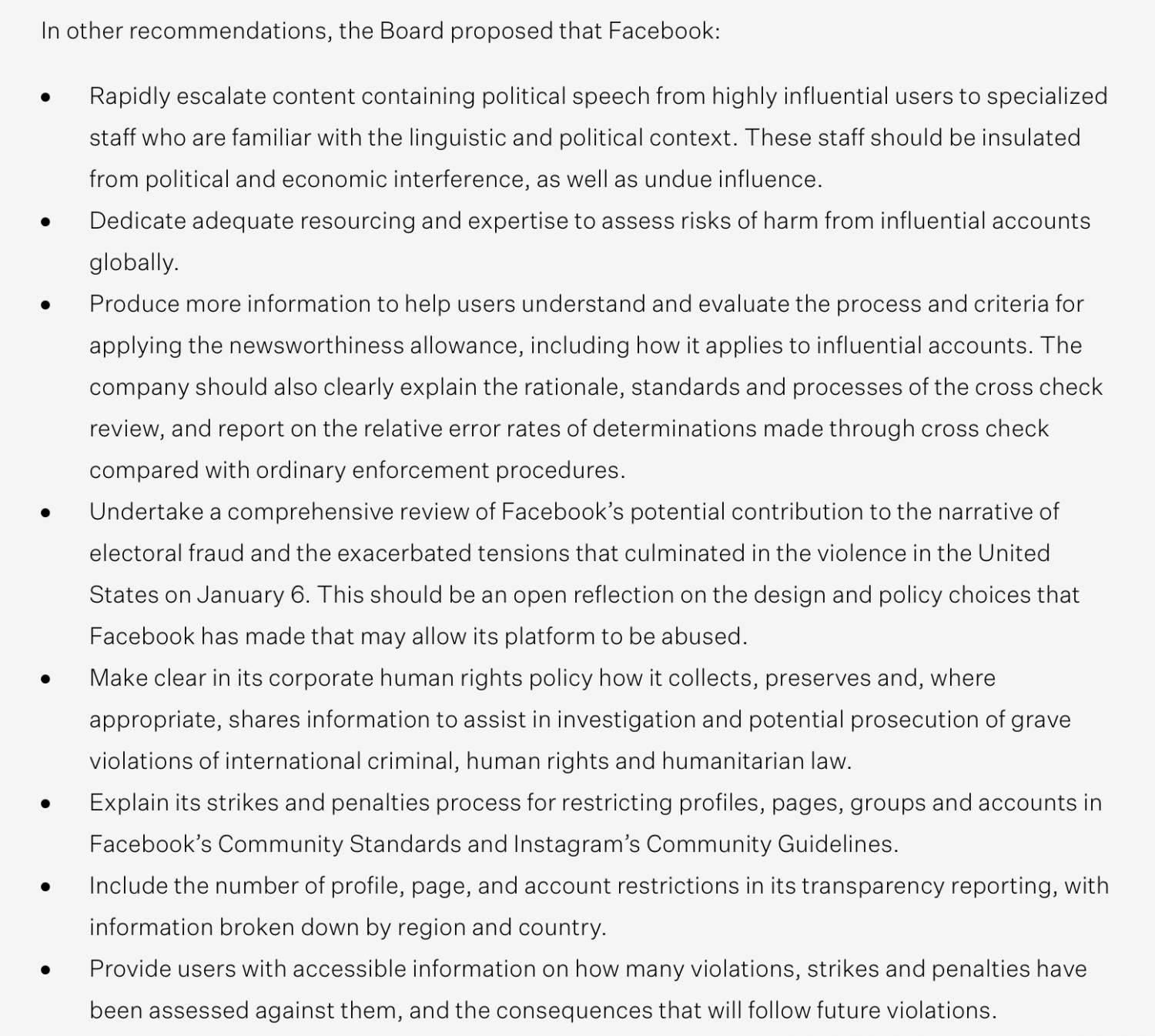 The Oversight Board also gave a number of suggestions as to how high-profile users – in particular heads of state and other high officials of government – can have an outsize impact through their Facebook accounts, compared to other users. It recommends specialist staff to whom “content containing political speech from highly influential users” can be fast-tracked for assessment, among other changes.

Update: Facebook has responded to the Oversight Board’s conclusions.