Facebook and Instagram users frustrated that content moderation has taken down their photos, posts, and videos will now be able to appeal that decision to a new Oversight Board, it’s been announced today. The group – which will make independent judgements about what should and should not be allowed on the social networks – will be made up of global representatives “with backgrounds in free expression, digital rights, online safety and other related fields.”

Content moderation has become an increasingly hot topic for social networks in recent years, as questions around censorship – real or imaginary – and the limits of free speech butt up against legal responsibility and protecting other users. Accusations that Facebook is pro-left-wing or pro-right-wing are frequent, each side pointing to supposed examples of the company’s bias at play.

The Oversight Board is the latest tool with which Facebook – and Instagram – will push back against those allegations of unfair treatment and favoritism. While Facebook and Instagram’s content teams will still be responsible for making the initial decision about what to take down and what to leave up, the Oversight Board will add a final level of appeals for frustrated users. It’ll also aim to set benchmark decisions by which future content moderation can be judged by.

“We won’t be able to hear every appeal,” Catalina Botero-Marino, Co-Chair of the Oversight Board, warns, “but want our decisions to have the widest possible value, and will be prioritizing cases that have the potential to impact many users around the world, are of critical importance to public discourse, and raise questions about Facebook’s policies.” 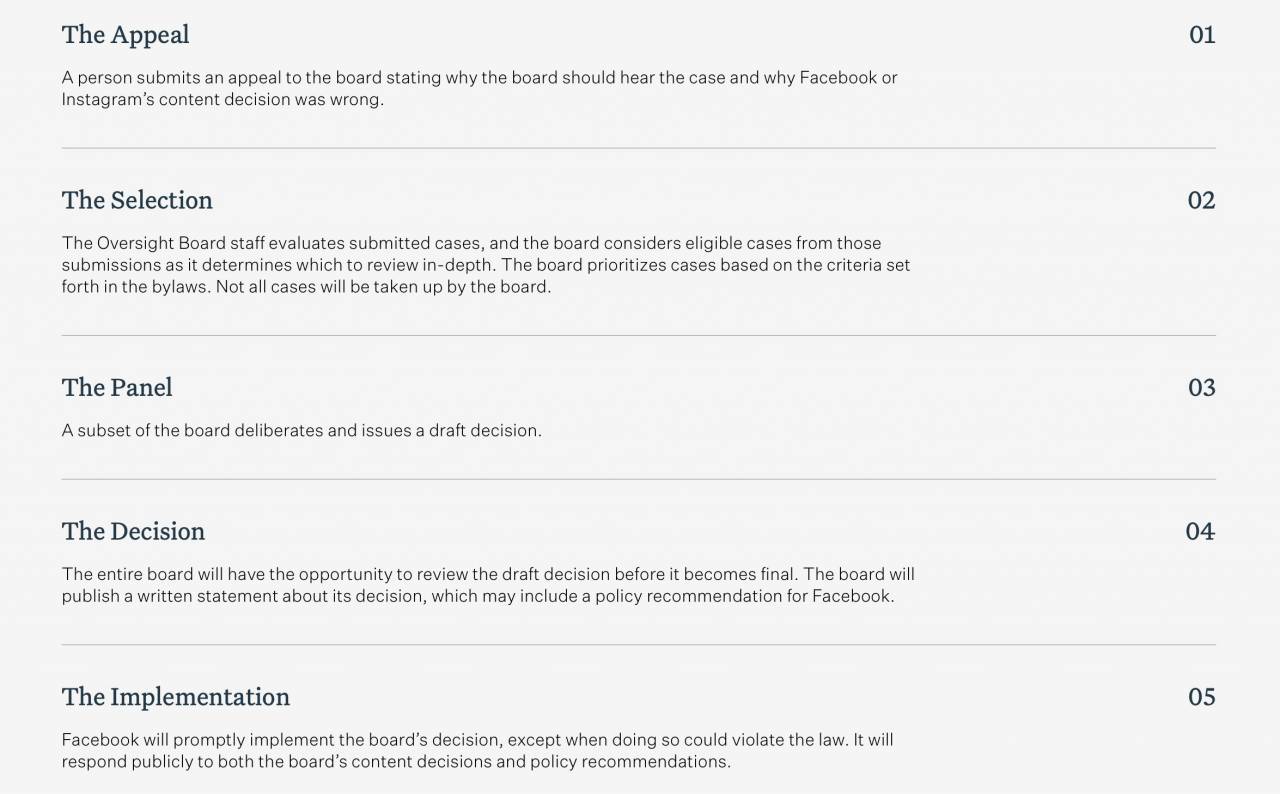 Initial content appeals will be undertaken through Facebook’s existing process. If that process has been exhausted, however, they’ll be able to submit an eligible case to the new Board. Facebook will also be able to refer cases directly to the Board, “including in emergency circumstances under the Expedited Review procedure.”

That procedure will focus on getting a rapid response, rather than miring appeals down in lengthy back-and-forth.

“Content that could lead to urgent, real-world consequences will be reviewed as quickly as possible,” Jamal Greene, Co-Chair of the Oversight Board, explained. “The Board provides a critical independent check on Facebook’s approach to moderating content on the most significant issues, but doesn’t remove the responsibility of Facebook to act first and to act fast in emergencies.”

Judgments will be made based both on Facebook’s Community Standards and Values, and international human rights standards. Selected cases will be assigned to a five-member panel made up from the twenty-strong list, at least one member of which will be from the same region as the content impacted. No single member will be responsible for the final decision, and there’ll be a public comment period during which third-parties will be able to give feedback to the board.

New cases are being accepted from today, and it’s expected that case decisions will be reached, and Facebook will act on those decisions, within a maximum of 90 days. In addition to deciding on individual content appeals, the board will be able to recommend changes to the overall Facebook Community Standards.