F-150 Lightning blasts past 20,000 EV pickup reservations in half a day

Ford’s F-150 Lightning may only have been unveiled last night, but the all-electric pickup has already seen more than 20,000 reservations the automaker has confirmed. The new truck may look much like a regular, familiar F-150, but gone are the gas engines and, instead, two electric motors have been dropped in for 4×4 driving.

Between them there’s a battery pack – with Ford not quite ready to discuss its exact capacity – that’s expected to hit either 230 miles on the EPA’s testing for the Standard Range model, or 300 miles on the Extended Range. Both will have no shortage of power, with 775 lb-ft of torque expected.

The Standard battery F-150 Lightning is expected to have 426 horsepower, and do 0-60 mph in approximately 5.0 seconds. As for the Extended version, that’ll have 563 hp and trim the 0-60 time to the mid-4.0-seconds point, Ford suggests. Payload rating will be up to 2,000 pounds, while the F-150 Lightning will be able to tow up to 10,000 pounds, configuration depending. 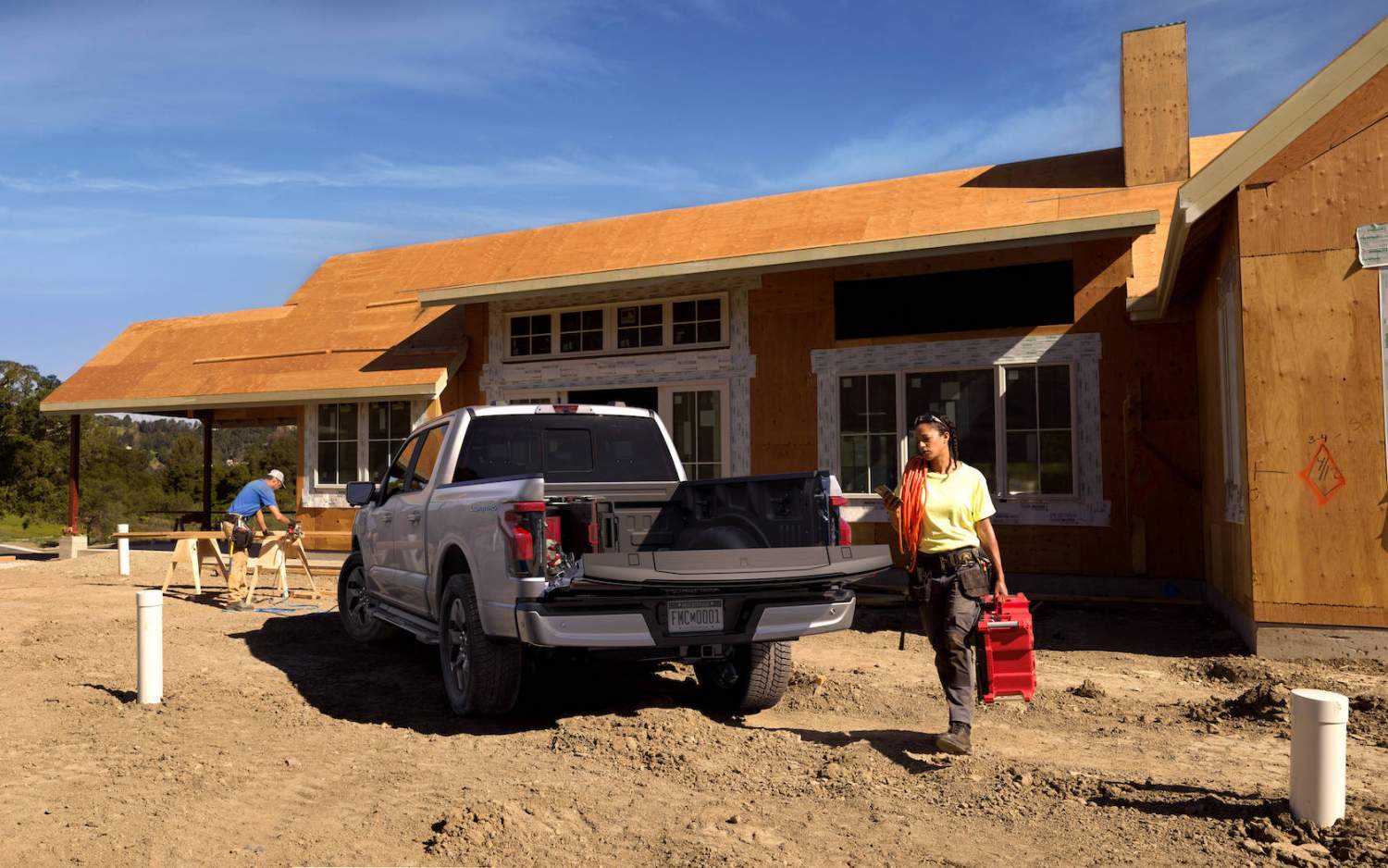 Only one body style will be offered, at least initially. The truck will have a SuperCrew cab, with four doors and seating for five, along with a 5.5 foot bed. However since there’s no engine to accommodate under the hood, Ford has swapped that for a huge front trunk, or frunk. That has a massive 14.1 cu-ft of capacity, more than some sedans offer from their regular trunk, as well as power outlets and a multi-position floor.

Ford is leaning into the tech story with the F-150 Lightning, too. It’ll be one of the automaker’s first models to support its new BlueCruise system, for hands-free driver assistance on highways. That relies on a camera to make sure the driver is paying sufficient attention, rather than the more traditional method of sensors in the wheel itself. 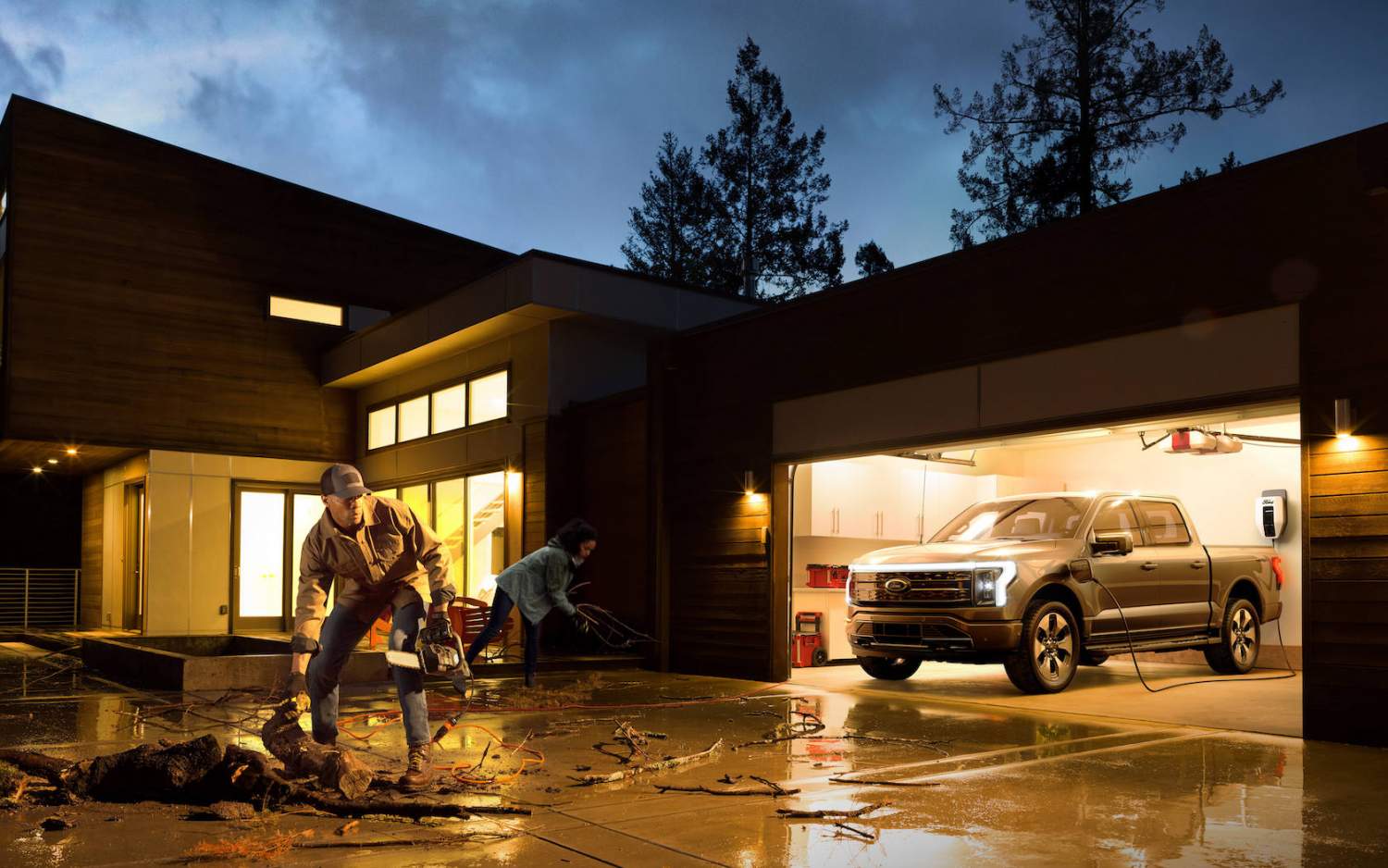 Integrated scales – to track payload – will be optional, and their data will be incorporated into the range estimate calculations. Ford is also taking into account everything from weather conditions along your planned route, to the size, shape, and weight of what you might be towing. Once programmed through the touchscreen, your trailer can be saved and its particular characteristics factored into the range gauge on the all-digital instrument cluster.

The electric pickup will support up to 150 kW DC fast charging, but it’s at home where things get interesting. Ford will offer a new 80A home charger, which can handle bidirectional power. Normally, it’ll push energy into the truck’s batteries, but in the case of an outage the home can be run from the F-150 Lightning instead.

Ford says that the typical house could last for up to three days in that condition – or as many as 10 if you’re more frugal with your power consumption. The automaker is also partnering with solar installers, for a more comprehensive green home energy solution.

Pricing kicks off at $39,974, though that’s for the entry commercial trim; Ford will have more details on that version later in the month. The 2022 F-150 Lightning XLT, the first consumer trim, starts from $52,974, with a maxed-out Platinum model more than $90k, though those prices are all before any incentives or rebates for new EV buyers.

Ford has already taken 20,000 reservations – which require a refundable $100 deposit – since opening its website to potential buyers at 9:30pm ET last night, the automaker confirmed to SlashGear this morning. While reservations may be open now, however, actual orders won’t be taken until fall 2021, and deliveries of the electric truck aren’t expected to begin until the start of 2022.