Having tipped their upcoming next-gen Android MID back in August, French firm eviGroup have now revealed their 5-inch touchscreen device.  Set to arrive in France in December, priced at the equivalent of $300 to $400, the eviGroup Wallet has integrated 3G, WiFi and GPS. 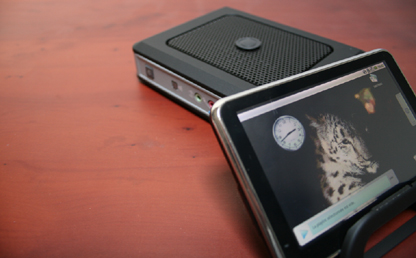 There’s also a TNT TV tuner integrated – complete with recording facility – though that won’t be much use outside of France, together with a camera and a microSD card slot to augment the 8GB of onboard storage.  The Wallet has two miniUSB OTG ports, which will work as USB hosts for plugging in keyboards and other peripherals.

Text is entered via the usual on-screen keyboard, but eviGroup say they’re also working on an alternative method of input.  Meanwhile there are larger versions in the pipeline, too.  The company is yet to confirm it definitely, but they’re hinting that there’ll be wider availability in the future, too.