We’re getting closer and closer to the launch of Essential‘s first flagship phone. Emails are being sent out to some Essential Phone early adopters, saying that their phones will be shipped within the next week. We still don’t have an official release date for the Essential Phone yet, but you have to imagine that it’s coming up before long.

Before you get too excited, however, there are a few things to know. The only Essential Phone model that’s shipping within the next seven days is the black version. The white variant is still a few weeks away according to some of these emails, and Essential is actually giving those who ordered a white phone the opportunity to switch their order to a black one to get it sooner. SlashGear’s Vincent Nguyen has received a shipping notification of his own, noting that the phone will ship within the next week.

Furthermore, 9to5Google reports that shipments of Essential’s 360-degree camera add-on will also be somewhat delayed. Those who ordered one will receive a separate email at some point in the future to notify them of shipping, so be prepared to wait a little longer for the Essential Phone’s first modular accessory. 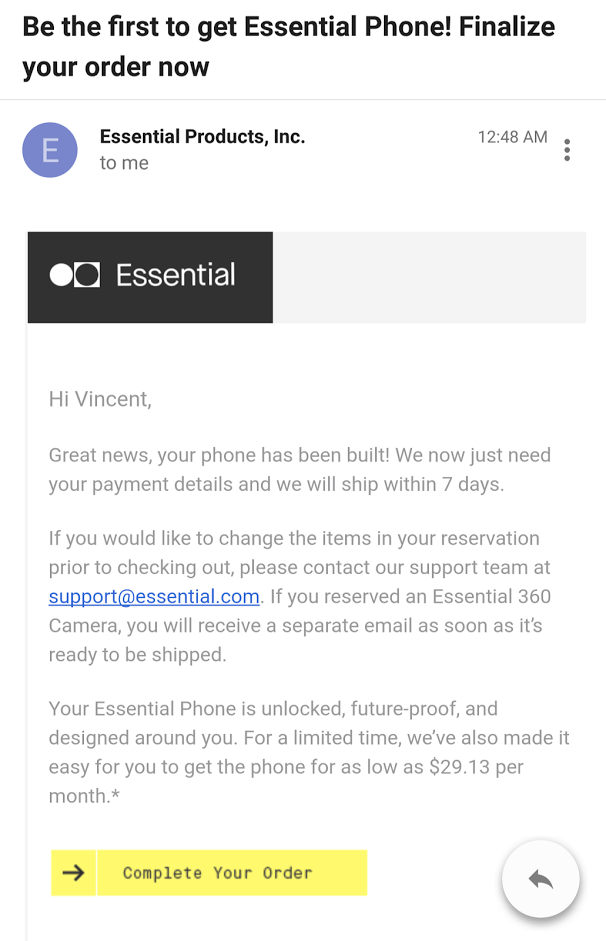 Last week, we learned that Essential was able to attract some high-profile investors, including Amazon and Tencent. At the same time, Essential president Niccolo De Masi revealed that the phone’s release was still a few weeks out, noting that more would be shared in a week’s time. Now, precisely one week later, early adopters are beginning to receive these shipping alerts.

That suggests the Essential Phone’s official release date is still a week or two out. Essential might have some competition when its phone finally launches, as Samsung is expected to announce the Galaxy Note 8 one week from today. Recent rumors say that Samsung will then launch the Galaxy Note 8 the next day, so in another week or so, we could have two new Android flagships on the market. Stay tuned, because we’ll likely hear more about the Essential Phone soon.