Today is the day the Ender’s Game movie gets its first full-length trailer. But before it’s released, the company behind the production is pushing a full-breadth viral data campaign to support it. Much in the same way Prometheus was supported by the virtual presence of the company Weyland Industries, here Ender’s Game is heralded by the International Fleet. This government group plays a major part in the Ender’s Game story, and here appears with propaganda aplenty for those anticipating the film.

The International Fleet Sentinel is a faux-publication being shown through the micro-blogging website Tumblr. There you’ll find a series of five portals that bring information about the story through blurbs written from the perspective of the space army that is the International Fleet and the world government, graphics included. The first of these is a Mission Statement.

UPDATE: The first full-length Ender’s Game movie trailer has been released – have a peek at it and discuss without end!

It’s here that the International Fleet lets Earth know that it remains at the center of the “single, harmonious government” preparing for a potential second global invasion by aliens that were defeated by Mazer Rackham in the distant past. Readers of the book know that this posturing is done for more than just the benefit of the citizens of the Earth’s confidence in their leadership.

“Lucky for us, every human being has preparation on their mind,” reports I.F. Major Gerald Stacks, special negotiations envoy to the nations of Earth. “The leadership of humanity must prioritize interstellar readiness and, to support that, total global cohesion.”

This theme seems to be getting pushed harder than it is in the original book. Perhaps we’ll see more of a “big government crush” than we do in the original storyline. And hopefully more of Peter and Valentine.

The application process for Battle School is not that unlike joining the Navy here in the present, only it’s not the recruit that signs away their future, it’s their parents. Gifted children are what Battle School will be pushing through to end up in I.F. Tactical and the Strategic Training Academy.

“There is no greater pride for parents than to see their children achieve greatness, and there is no greater achievement than to protect the survival of our race. The I.F. Tactical and Strategic Training Academies are training tomorrow’s brightest leaders and greatest public servants. Our world needs heroes. Your children are our brightest hope.

These exclusive academies provide a safe place for gifted children to refine their focus and learn the necessary skills to lead our planet in the impending intergalactic war. Prepare our world for the future and prepare your child for greatness today.

Does your child have what it takes? Could your child be the next Mazer Rackham? Apply to the I.F. through your local recruiting office to discuss your child’s government sponsored education.”

Of course these kids wont remain children as such for long. As the story tells us and as we can expect from the film, Battle School gives no mercy to the future battle-hardened members of the military, not for size, not for ability, not at any level. Through this mercilessness, Ender will become more powerful than the coddled child he was on Earth.

Here you’ll see the first teaser for the film, a seconds-long set of mini-clips also making way for the first full-length trailer coming up later today.

Here you’ll find information about the Battle School, where Ender and other future geniuses are sent to develop and become great leaders. It’s not in every plotline that a group of children are given such regard. Here though, the IF has recognized the power of the children of this future generation and will be making full use of it. 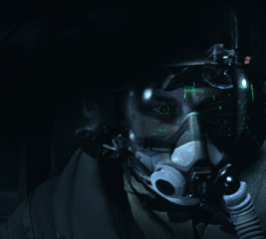 Looking Back at the Great Invasion

Setting the viewer up for an understanding of why everyone is so flustered about aliens in the movie, this bit tells of the former great leader of the military in Mazer Rackham. This fellow is, in the story, a major hero and one looked up to as history’s most prominent savior of the human race. The victory he commanded allowed the “Great Invasion” to be stopped and preparations to begin for the next wave of alien opponents.

A plot element used in the Ender’s Game story used to single out Ender and prepare him to be a major military leader for the future of the human race. This Thirds announcement lets the world know that though overpopulation has regulated society at large to have only two children per couple of parents lest a special exception be made. Ender is, of course, part of a very special situation, as we’ll find throughout the story.