A brand new viral advertisement has been released today for the blockbuster science fiction film Prometheus, taking on this time the hereto-unmentioned Yutani corporation. Fans of the original Alien series will remember that the company that acts as antagonist in many situations goes by the name Weland-Yutani, this the combination of the company headed by Peter Weyland (played in this film by Guy Pierce) and the not-yet-mentioned (until now) Yutani group. This video shows the main protagonist of the film, researcher Dr. Elizabeth M. Shaw addressing none other than Weyland himself even though by the time she’s the age she appears in the video here, Weyland should be long dead.

This is but one of many indicators that not all is as it seems here in this newest viral video, the most major factor being that this video is first and foremost a robotic analyzation of the facial features and projections made by Shaw as she attempts to get funding from Weyland to move forward with the project that will eventually become Prometheus. Another rather pointed element in the film is the fact that its tagged (in video) as being part of a YUTANI Polygraph Technologies test from the year 2074, this according to the official timeline provided by official viral film website Weyland Industries /Timeline as being one year after Project Prometheus is marked as “Underway.”

It should also be noted that in an early showing of the film, press were told that 2089 was the year that Shaw and crew “find cave drawings containing a star map left by alien intelligence 35,000 years ago.” So Weyland industries does appear to have started project Prometheus 16 years before Shaw and crew found their matching star maps. Sinister stuff! 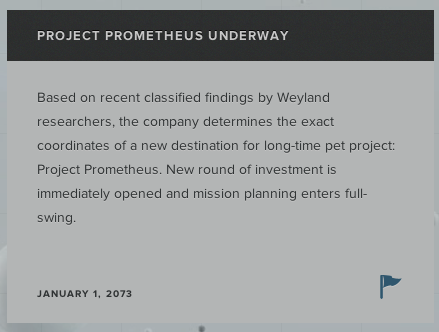 2. The analyzation appears to have been initiated by P. Weyland, aka Peter Weyland, a character that should be long dead by the time the mission (and Shaw herself) were born.

3. Yutani has not been mentioned anywhere else but this video thus far – save for the original Alien series which takes place many years after the events of this Prometheus film.

Stay tuned for more Prometheus action as we continue to dissemble the film until its final release – less than a month from now! Check out our timeline below to get a full handle on everything we’ve seen and analyzed thus far!