This printer is tiny, but mighty. The printer works with the sort of printing technique that’s both messier and far, far more accurate than the most basic sorts of 3D printers on the block. The Mars Pro is a MSLA 3D printer with UV photocuring resin, courtesy of a matrix UV LED array.

The ELEGOO Mars Pro MSLA 3D printer works with a max printing size of 5.45-inch (length) x 2.56-inch (width) x 5.9-inch (height). So it’s pretty tiny. If you’ve seen any of our other 3D printer reviews, you’ll know this is the smallest 3D printer we’ve yet handled. …Unless you’re talking about the 3D printing pen called 3Doodler Pro+, and the rest of the 3D printing pens from that line.

This device has a rubberized cover seal to keep out dust and keep resin order in. This device also has a fan and an air filter to suck up resin odor and filter it out while printing takes place. This fan isn’t silent, but it’s not loud enough to be bothersome. If I have this 3D printer running in a room with the door closed, I can BARELY hear it outside of said door.

This 3D printer works with the same software we used with the Phenom by Peopoly. That means we’re working with ChiTuBox, and that means we’re back to basics. This software is easy to use, once you get the hang of it. 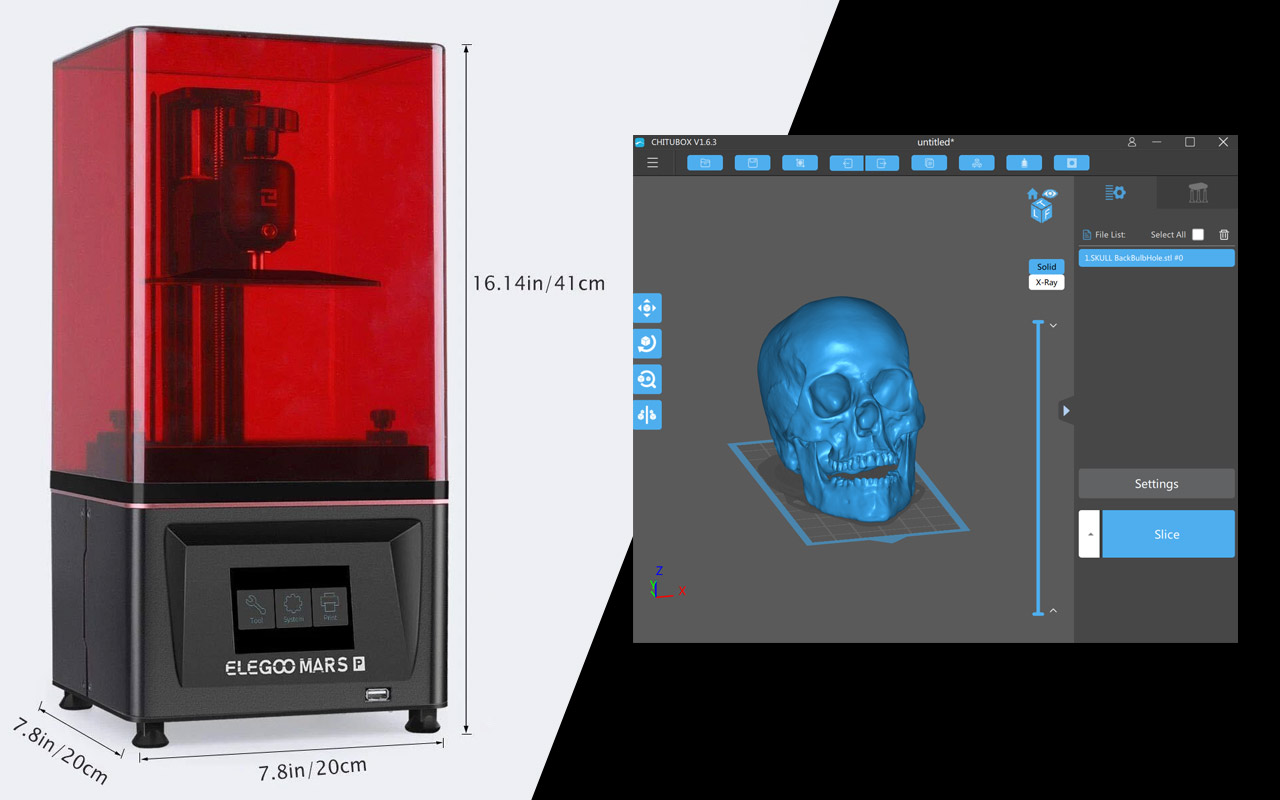 All on-device controls are done with a simple and basic touchscreen interface right up front. Files are delivered to the printer via USB stick. Around back is an on-off switch and a power port that connects with a power cord that’s also included in the box. 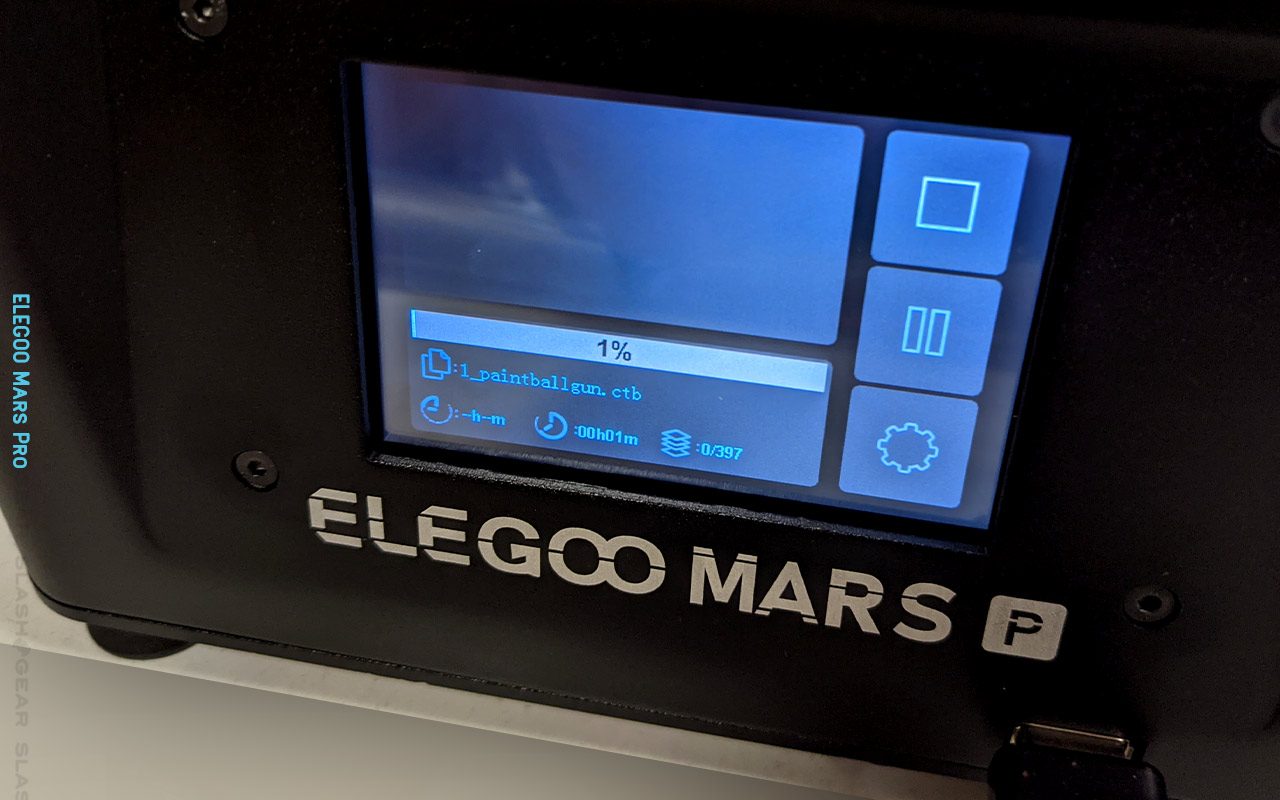 The price of the printer is relatively low – outside of the most budget-friendly off-brand 3D printers in the world, of course. To print with this printer you’ll need at least one bottle of UV-curable resin. Make sure you research your resin before you buy – some are made specifically for this sort of printer, while others require a whole lot of extra work to tune before they work.

The good thing about working with a brand as well-known as ELEGOO is the functional and helpful online community. Because this printer is relatively well-known, I was able to find a forum where I could find accurate settings (for ChiTuBox) right out the gate.

If you’re looking to print miniatures for Warhammer, or action figures, or tiny bits and pieces of many sorts, this printer is a winner. The quality of the prints this device produces is as accurate, sharp, and solid as the Phenom – since they use basically the same technique for printing – but it’s all on a smaller scale. 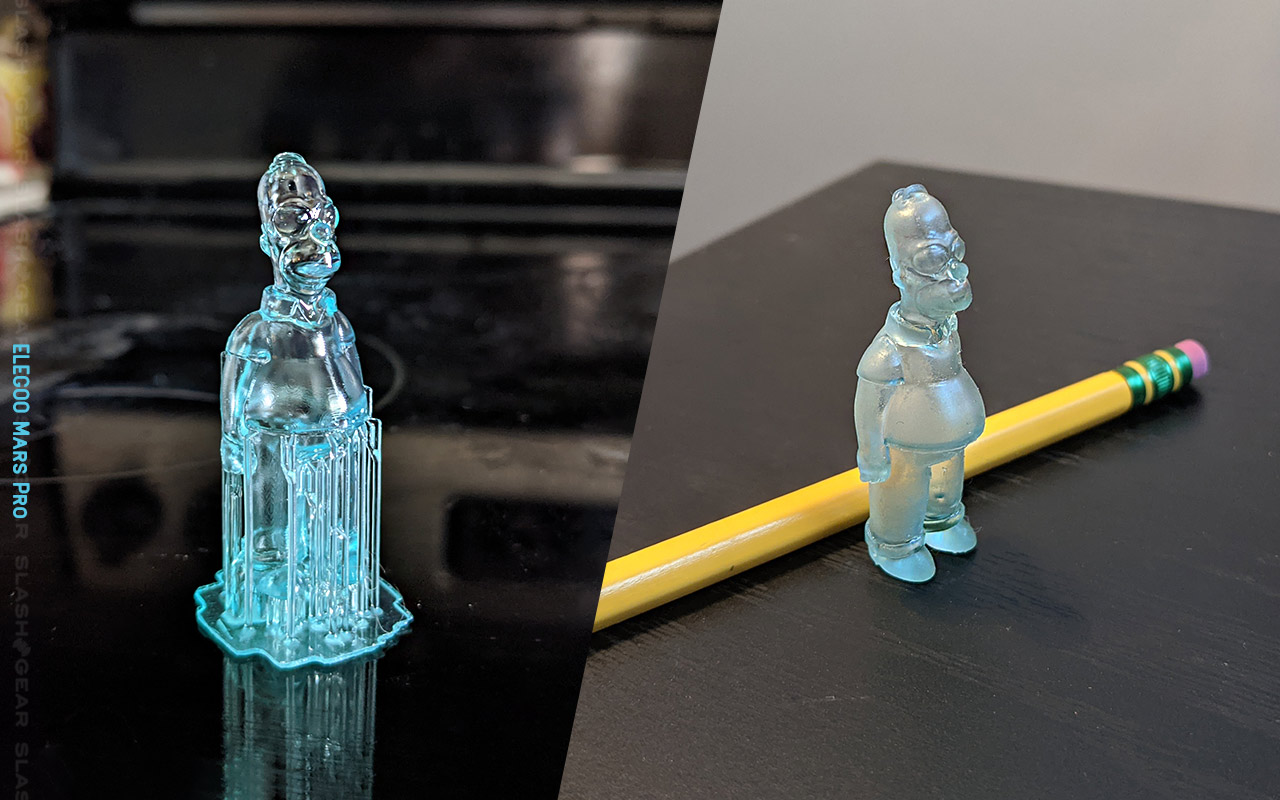 When you’re talking about deciding which 3D printer you’re going to buy for a project you’re about to do, size obviously matters. When you’re talking about printing with PLA via Fused Deposition Modeling (FDM), with a roll of filament, it’s generally best to get as big a printer as you can – there’s no drawback save the space in your basement you’ll need to reserve.

When you’re looking to buy a 3D printer that uses Vat Polymerization (SLA or DLP), you’ll generally be best served by finding the 3D printer that’s just slightly bigger than the project you’ll most likely be doing regularly. If you only want to print a single miniature action figure at a time, it’s best to have a tiny printer like this Mars Pro. If you’re printing a life-sized Iron Man mask, you’ll want a printer like the Phenom.

Printing with light-curing resin means you’re using a liquid. This can get a little messy. I’ve gone through a LOT of trial and error when it comes to this stuff, especially regarding final curing and leaking.

When I print a miniature that has a hollow chamber, there’s a decent chance that uncured resin will get trapped inside. If the print is properly sealed and the sides of the print are thick enough to avoid breaking, I need not worry about that liquid trapped inside.

If, however, I make the mistake of having the printer print a portion of the print too thin, and in my post-printing process I accidentally break through to the inside, the liquid resin will leak out. I learned the hard way that this resin can cause a MESS with other materials.

For example I printed a tiny model and did not properly check all the nooks and crannies to make sure I’d not allowed leak. I painted the model with acrylic paint, thought I was done… but oh, no!

Once resin started leaking from the inside, the paint on the outside melted away. This resin does NOT play nicely with paint, ink, or basically any other sort of liquid you might be applying to your 3D print after you’re done with the drying.

BUT, this isn’t the fault of the printer itself. If you tell the Mars Pro to print a model with proper drainage, or sufficiently thick and watertight sides, you’ll have no issues whatsoever. 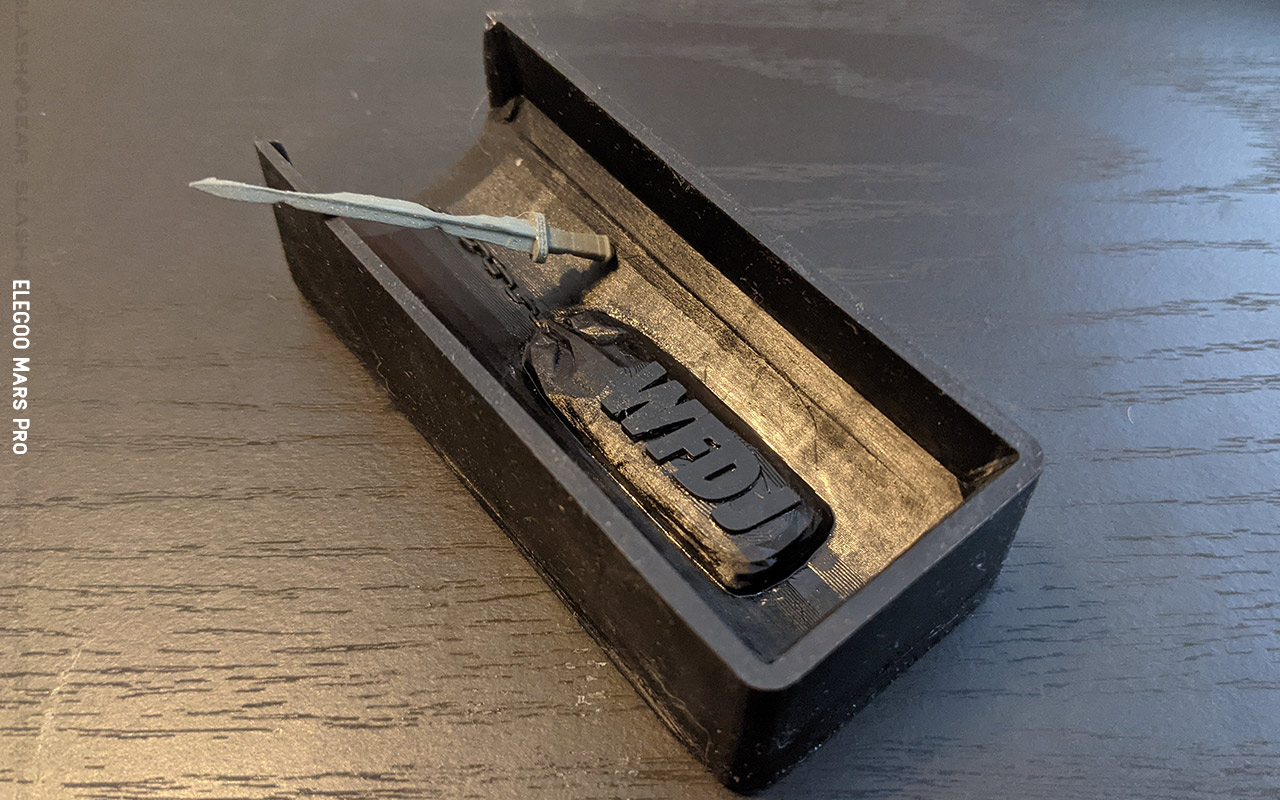 We’ve tried a semitransparent blue, a black, and a white resin from Elegoo, and all worked with great results. Above you’ll see a black print using Elegoo resin, and a semitransparent blue print (Homer Simpson) with Elegoo resin. You’ll also see a sword printed with Siraya Tech FAST resin – that’s a completely different non-Elegoo brand resin that also worked great, as soon as we figured out the right settings to make it all work right.

The print plate is held in place with a simple hand-screw, and the moving parts throughout this machine are basically dummy-proof. Even the material that holds the resin for curing (FEP film) is replaceable with a very, very simple process.* 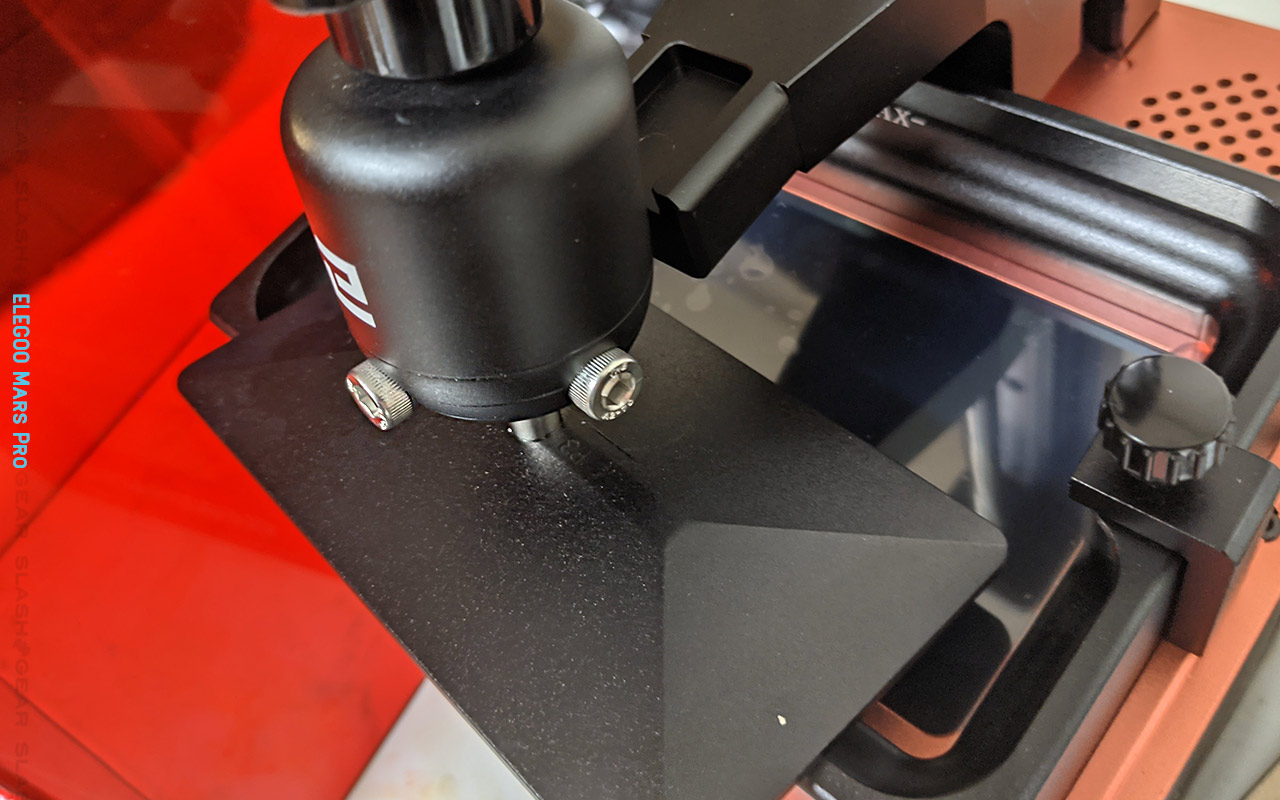 ABOVE: The top side of the print plate is sloped. This is a very important detail. I’ve used a printer where this part is flat on top – each time it’d finish a print, it’d carry a bunch of resin up with it, and it’d drip all over the place. The ELEGOO Mars Pro’s sloped shape allows the resin to slide off, resulting in a far less messy experience.

*Here’s another reason why you’ll do well to get only the size of printer you need, no larger. With the Peopoly Phenom, you’ve got a giant piece of FEP film holding your resin. This leaves a lot of room for user error. I went through a couple of trays pretty quickly, meaning I’d need to buy another replacement in order to keep printing. 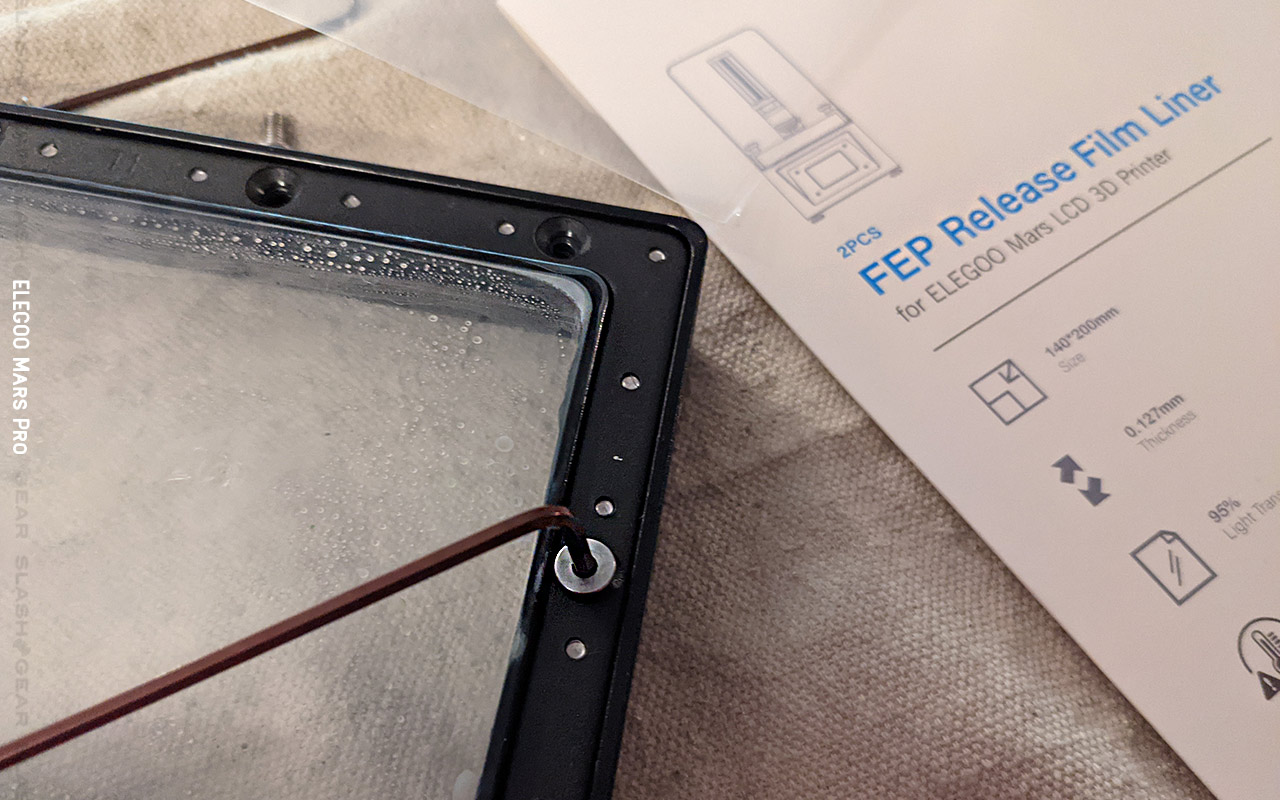 With the ELEGOO Mars Pro, the FEP film is tiny, and replacing said film is a lot cheaper than it is on a far larger device. Elegoo provided us with a set of replacement film pieces so we’d be able to see how simple the process is. Replacing this part is easier than applying a screen protector to a smartphone.

The ELEGOO Mars Pro 3D printer is a tiny masterpiece. It’s simple to run, and just the right size for tiny projects. At $250, the price is right, and its big-enough brand name means 3D-party support and online community help are in-effect.

If I wanted to start printing pieces for a Dungeons and Dragons party or wanted to prototype tiny toys aplenty in my spare time, this would be the printer I’d buy. This is a very, very good printer. It has solid construction and is delivered with a well-thought-out experience from start to finish. 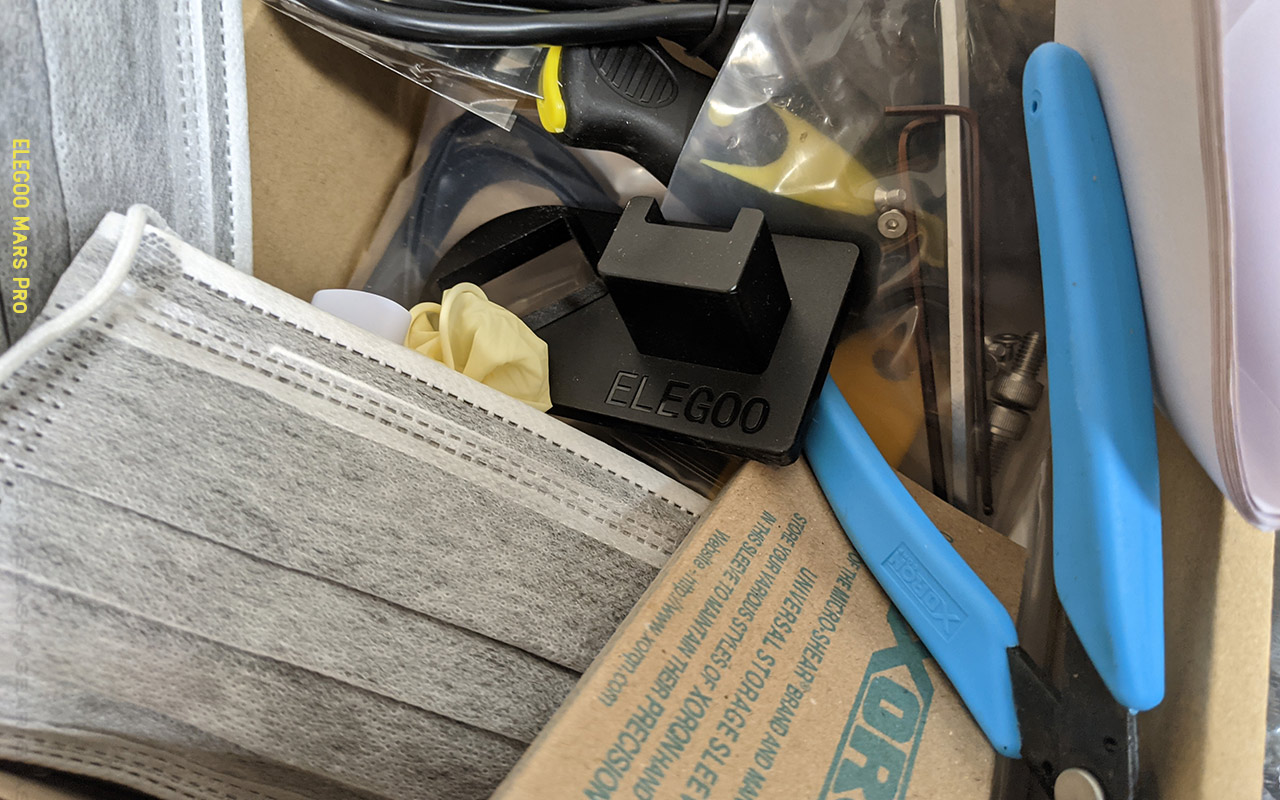 As you’ll see above, the ELEGOO Mars Pro is delivered with a variety of tools and accessories that’ll prove vital to your 3D printing experience. You can attain this printer from a variety of sources right now for approximately $250, while 1000ml bottles of resin will cost you right around $35-$40 USD. All of this is available from Elegoo online and/or (potentially) in 3rd-party 3D printer shops.