The Phenom by Peopoly is a $2k MSLA (LCD+LED) light-cured resin 3D printer with a big orange panel door. This device prints 3D objects with liquid resin, activated with lights – it pulls the print up from the goo, rather than printing the print from the bottom to the top with a melted line of material. This printer has been two things to me thus far: The easiest experience I’ve had with a 3D printer, and the deliverer of the most detailed final print quality I’ve yet seen in a personal 3D Printer (at 72 um).

This Masked Stereolithography (MSLA) printer has a print volume of 276 x 155 x 400 mm, and a vat volume of 1.8kg – and it can be a bit messy. The process can be messy – the final prints we’ve made in our review process have been very clean and fine. The print quality in any 3D printer at this point in history should be a given – and here, it is. It’s great. 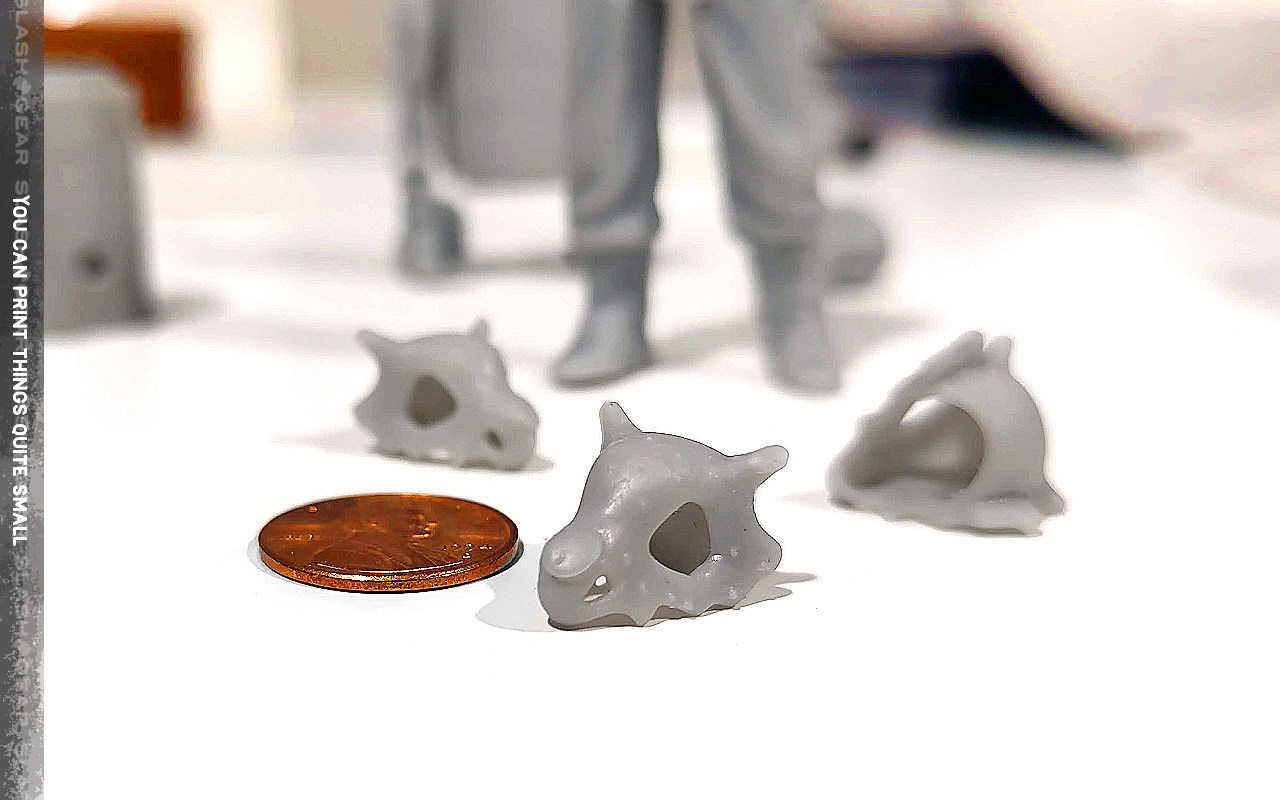 Above you’ll see a set of prints we’ve made – these are pretty gosh-darned tiny. These prints appear just after the props (applied automatically by the printer software ChiTuBox, outlined later in this review), have been cracked away by hand. The cracked-away bits can be seen in the photo on the left, below. The end result requires VERY little finishing, if one wanted to leave the final print the same color in which it was printed. 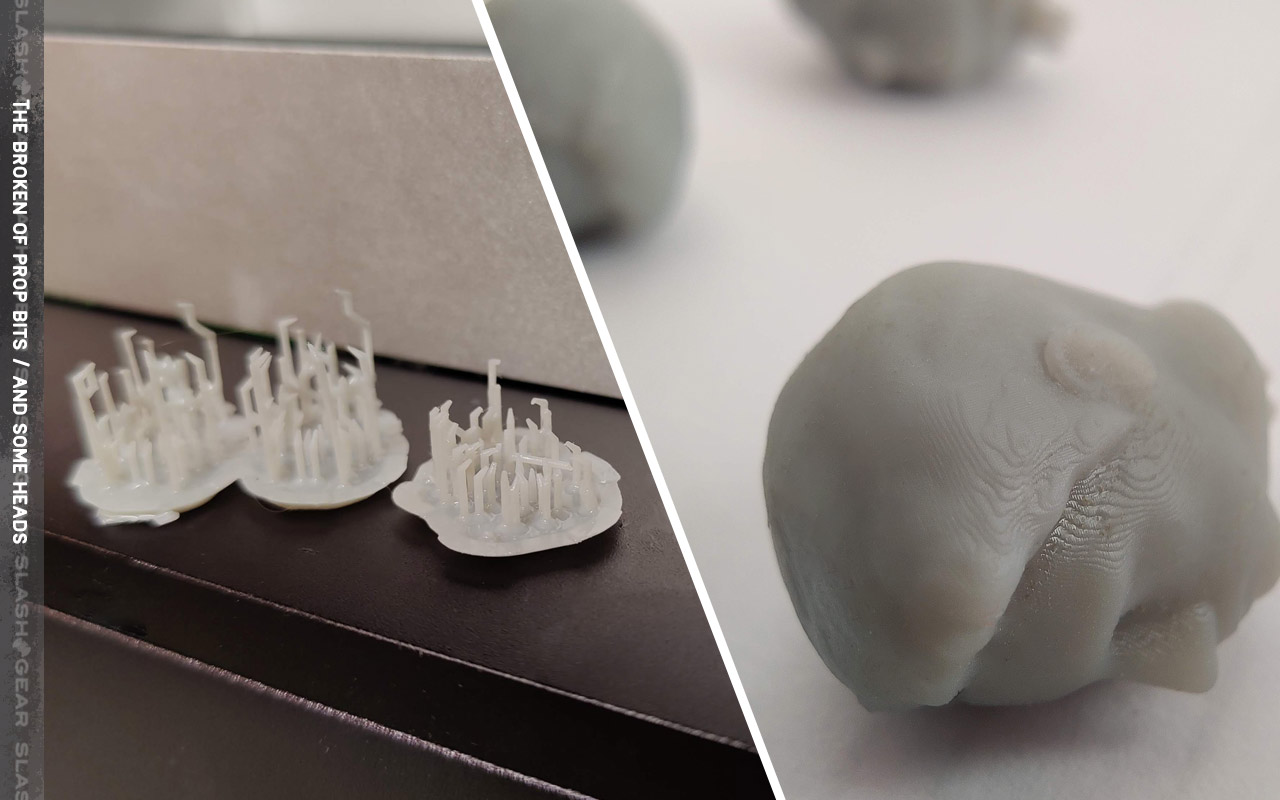 If you get very, VERY close to the prints you’ve made with a macro lens, you’ll notice the layers. Here you’ll see how tiny the detailing got on a set of action figure heads. This is after they’ve been cleaned up a bit and dried – all 3D prints come out wet with resin when they’re removed from the print tray with this printer.

You’ll want to wear protection for your hands when utilizing the machine, lest you accidentally eat a bite of cookie after you’ve removed a print before washing your hands, and find yourself tasting liquid resin. It does NOT taste good, let me tell you. It’s also not safe for human consumption, of course, so you’ll want to keep this entire operation well out of reach of small children. 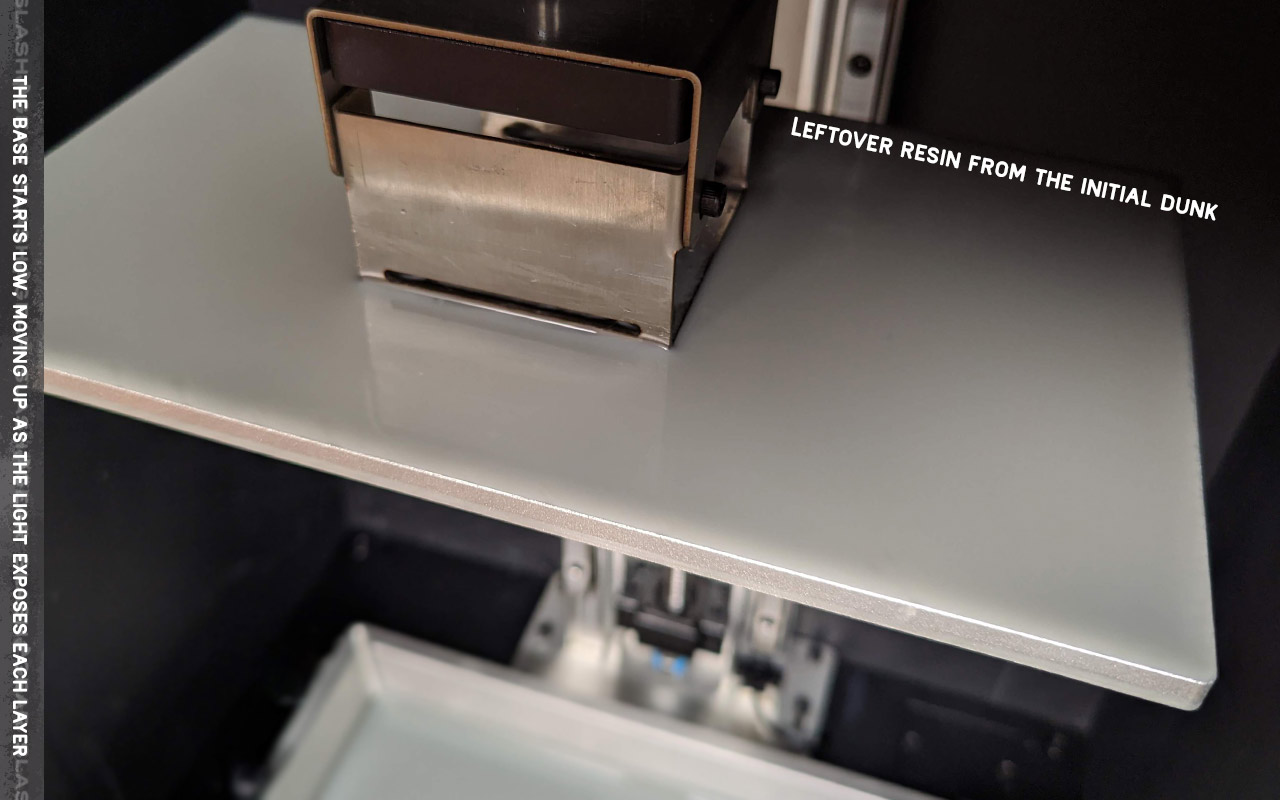 The way this company’s gone about delivering this project is interesting, given the DIY nature of the ecosystem. Take, for example, the LCD panel in this printer. You can buy a replacement LCD panel from Phenom for approximately $100 USD. That’s $100 for a 12.5-inch 4k Resolution LCD panel that you can purchase from Phenom.

Per the company, the panel has a lifespan of approximately 400 hours, dependent largely on how well the panel is treated. Per Phenom: “400 Hours on average (normally varies from 200-800 hours) and is a consumable.” The panel can be found in the printer under the tray that holds the liquid resin. 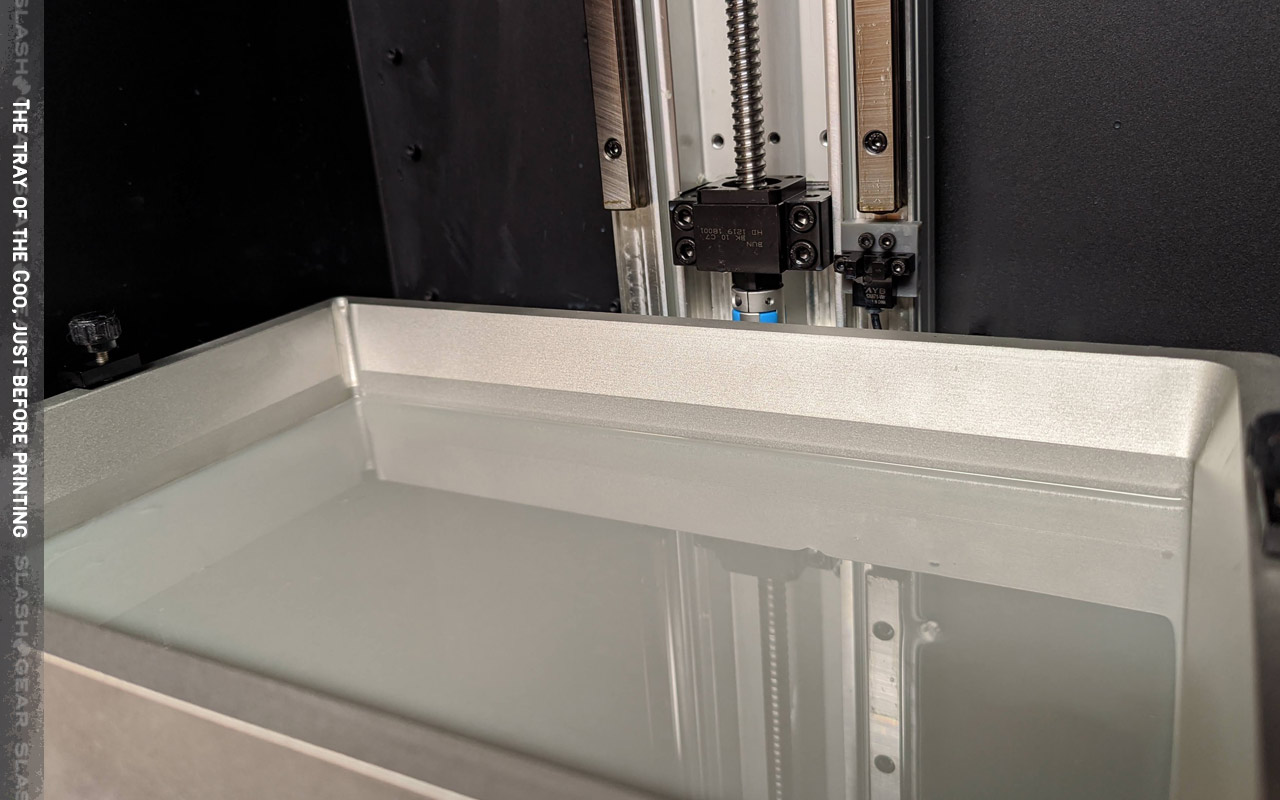 The panel is, oddly, kept in place with black electrical tape. This was one of two small issues I had with the printer. If I were to pay the full $1,999 USD (approximately two thousand dollars), I know I’d be disappointed to find part of the system to require the use of electrical tape.

On the other hand, we are operating in the DIY universe. If it works, it works. The tape might well be the best solution for this particular situation. Any other solution might not hold the edges of the panel watertight, and might require that the user make a greater effort when the panel eventually needs to be replaced. 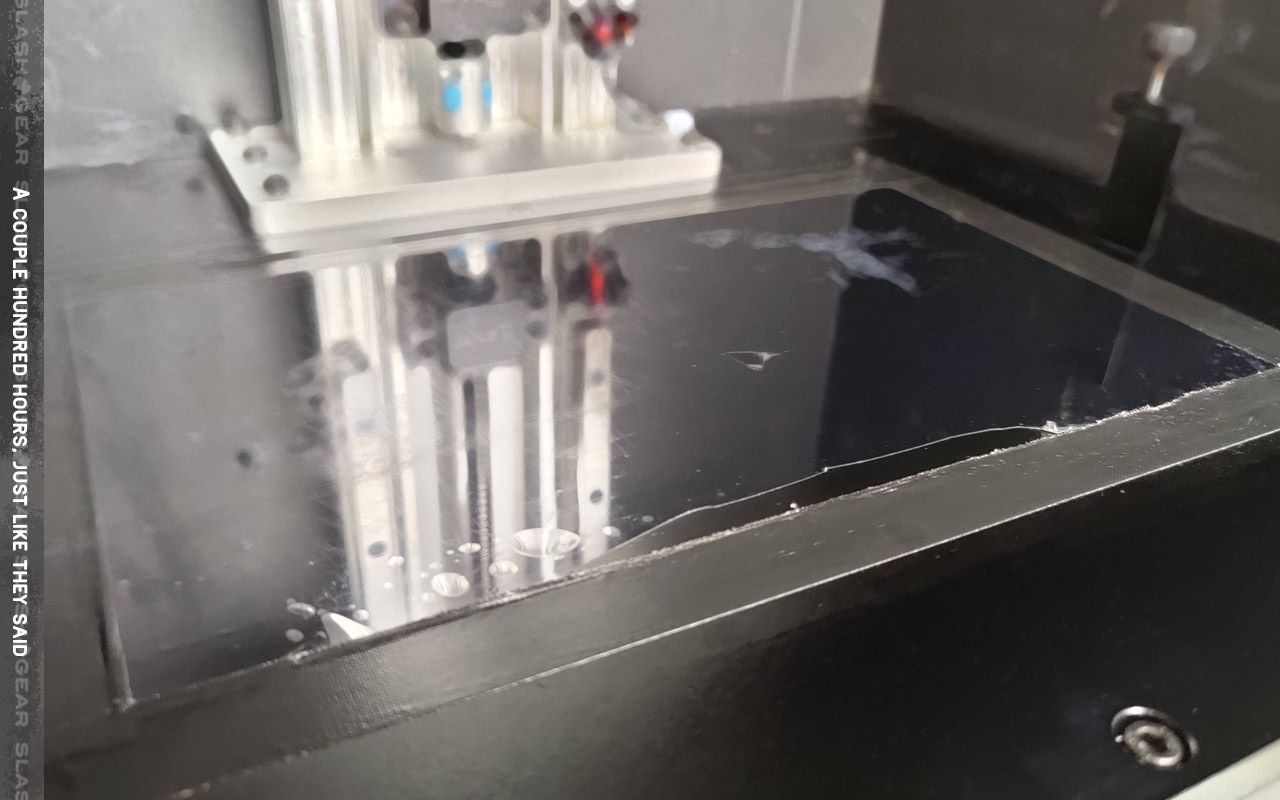 The only other issue I had was the ease with which I punctured the plastic barrier of the liquid resin tray while cleaning between prints. If there’s an error in the sliced-and-ready file you have the printer print, there lies the possibility that you’ll have a few lumps of resin that do not properly stick to the metal base in printing.

If there are lumps, there’s a possibility that they’ll be stuck to the plastic barrier in the liquid resin tray. I was not careful enough in removing a couple of lumps in one of our earliest test prints, and I punctured the plastic.

Thankfully, we were provided a spare bit of plastic tray barrier, and I was able to replace said barrier with relative ease. If you’re a clumsy sort of creator, you’ll need to be extra super careful in working with this particular 3D printer. A single piece of this “FEP Film for Phenom” is available from Peopoly for $22.50. It’s 100um thick, sent in a pre-cut size of 300 x 170mm. Per Peopoly: “We can only guarantee Phenom FEP vat performance with Peopoly film.”

There’s a sort of liquid resin used by this Peopoly Phenom printer that you’ll likely buy from Phenom when you’ve used what’s provided with the printer’s basic box. Peopoly sells 1kg of “Deft Resin” for $60 – that includes two 500ml bottles. You can see one of these bottles in the photo below, near the printer’s touchscreen.

This resin, working with this machine, creates fantastic results. Above and below you’ll see a few examples of objects we’ve printed with the Peopoly Phenom printer using this specific sort of resin – all in gray (or grey, if you prefer). They’ve also got white. It’s been suggested that third-party resin will work, but we have not tested any resin other than what was provided by Peopoly. 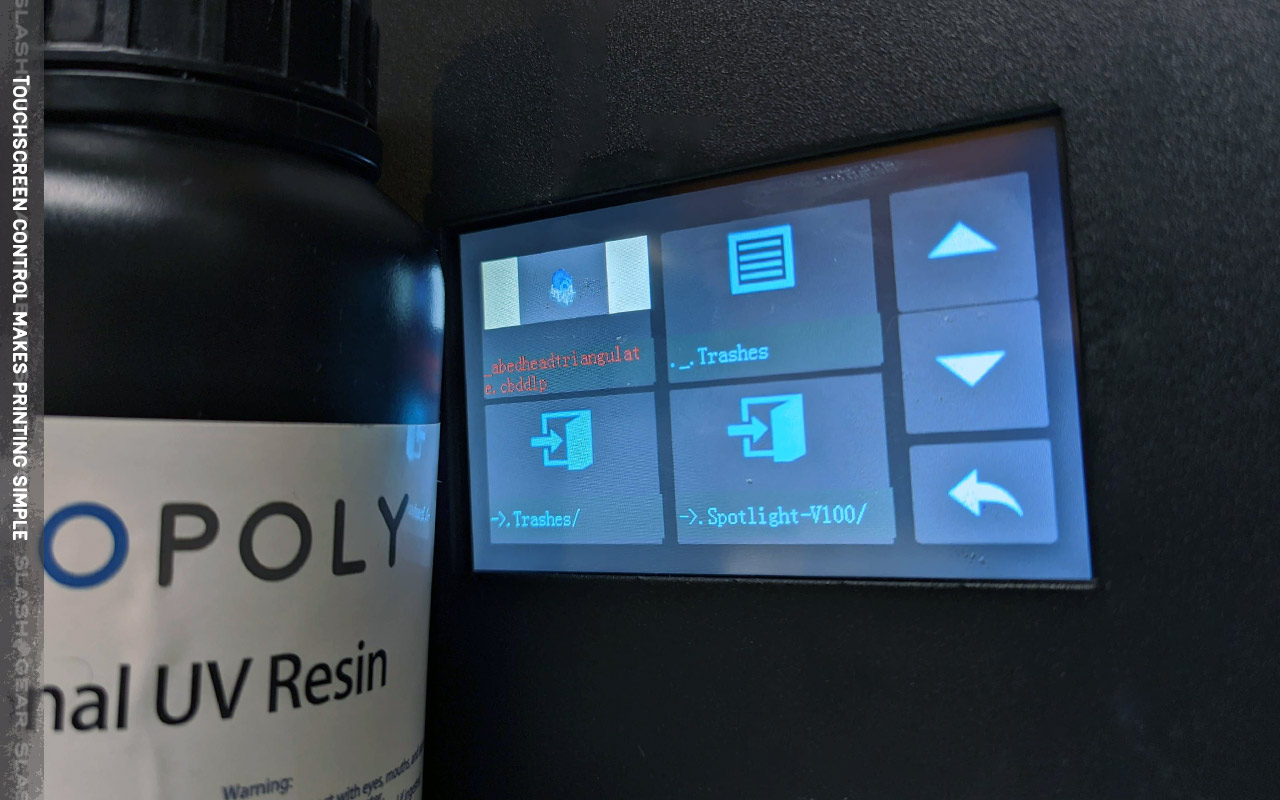 The size of this machine is nothing to scoff at. It’s 42 kg, a beast, able to make 3D prints larger than most of your everyday average made-for-everyone 3D print devices. This device connects with USB and over ethernet, but not Wi-Fi. The printer comes pre-leveled, but has a leveling test you can run to make sure nothing was bumped in shipping. Once out of the box, we had literally to place the printing bed, place and tighten the resin tray (or vat, whatever you want to call it), plug in the power supply, and pouring in a bit of liquid resin.

Peopoly’s app of choice for slicing is ChiTuBox. It’s simple, allows one-tap hollowing (with user-defined wall thickness), and easy adding of props. There may be a bit of a learning curve for users new to 3D printing – those that’ve prepared their own prints in the past will find this software quite simple.

The down side with ChiTuBox is the relatively limited capabilities of the software outside rather basic operation. If you’re used to preparing 3D prints with more powerful software – at least as powerful as an app like Blender – then just using the slicing app (ChiTuBox) for the most basic staging, it’s OK. But attempting to use the app’s automatically-placed props functionality on complicated 3D shapes requires a whole lot of processing power that a simple laptop doesn’t necessarily have to spare. If it weren’t already abundantly clear: This isn’t your average, everyday, print-from-a-smartphone sort of 3D printer. It means business. 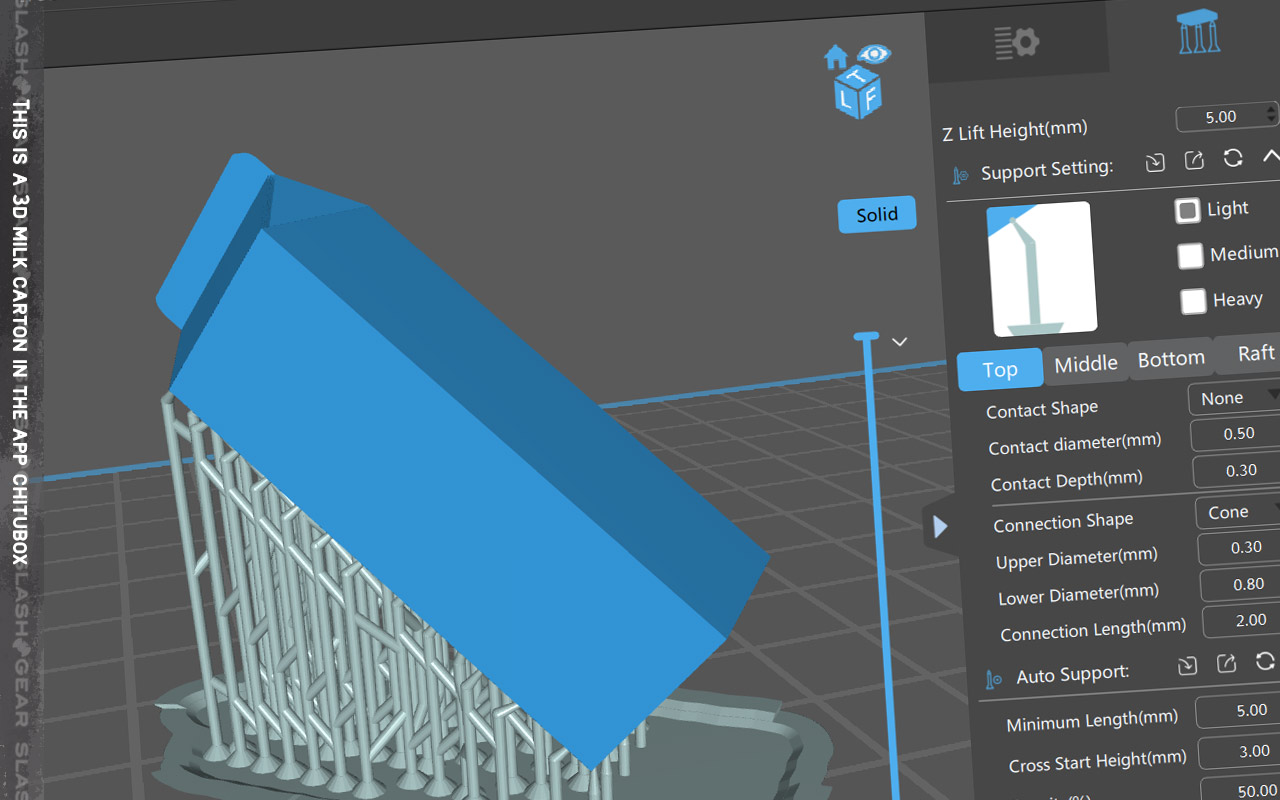 The Peopoly Phenom 3D printer can be purchased from Peopoly online for approximately $2k. This isn’t cheap – but there really aren’t many MSLA 3D printers out there that print this large for a price anywhere near what this printer costs. The closest we’ve found was the UNIZ Slash Pro, a professional liquid resin 3D printer (max build size 192 × 120 × 400 mm) – that’ll run you around $4500 USD.

My only wish with this printer is that the (again, very clearly market “consumable”) light panel that enables the printing here was a little more robust. As it stands, I’d not be thrilled to have to replace this part of the printer every time I cleaned or scraped away old resin a little too hard. Aside from that, the Peopoly Phemon 3D printer is easily our top recommendation for large-scale MSLA 3D printer in this price range on the market today.

Stick around as we continue to run through the 3D printers of all shapes and sizes right here on SlashGear. And take a peek at the timeline below for recent 3D print bits and pieces! ALSO NOTE: If you’d like us to test any other sorts of specific prints on this machine, let us know!