ASUS’ Eee Pad Transformer Prime will launch on November 9, according to an investor conference presentation, with two further Eee Pad “hero products” expected in Q1 2012, as the company attempts to build on the success of the first-gen Transformer. Meanwhile, Windows 8 tablets are set to follow on later in 2012, according to the slide desk [pdf link], though the first such models won’t arrive until Q3 next year.

The presentation is short on technical details for the Transformer Prime, but the tablet is described as including “real touch” along with the “real keyboard experience” thanks to the removable keyboard-dock. However, unlike the original Transformer, the style of the new Prime is far slicker and in keeping with ASUS’ Ultrabook series, despite still offering connectivity like HDMI.

As for the existing Eee Pad models, according to ASUS’ estimates there will be 1.6m shipped altogether in 2011, with the first-gen Transformer expected to account for 85-percent of those sales. The Eee Pad Slider and Eee Slate together will make up the remaining 15-percent. 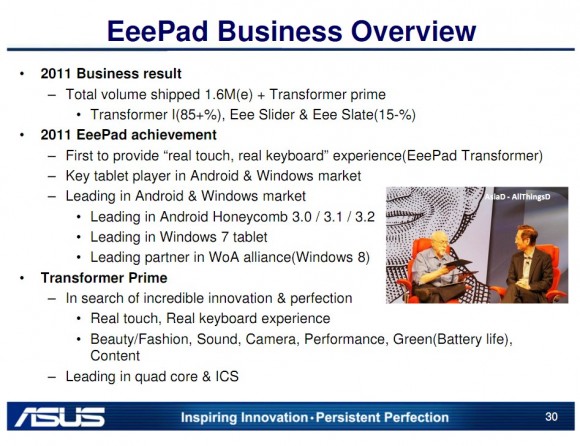 [via NetbookNews and via Notebook Italia and via Android Community]