EE DoubleSpeed LTE on test: Fast, if you can find it

EE‘s DoubleSpeed LTE launch was the big news of yesterday’s event, promising roughly twice the 4G speed across twelve UK cities with no extra charge. It’s the carrier’s latest pre-emptive attempt to corner the high-speed mobile market before its rivals wade in with LTE of their own, so with theoretical peaks of as much 150Mbps, it only seemed fair to put the new DoubleSpeed service to the test. As we found, though, it’s not quite so straightforward.

EE’s promise is based upon some technical shuffling that pairs together extra chunks of spectrum. To be precise, rather than allotting 2 x 10 MHz as it was before, EE now uses 2 x 20 MHz in the 1,800 MHz spectrum band. 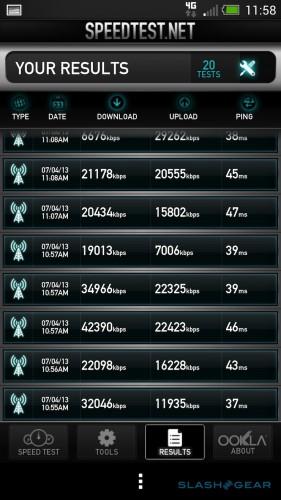 We powered up an HTC One on EE and ran through some speed tests in various locations just outside of central London, with 4G indicated and between one and four bars of signal strength showing. Initial impressions were excellent: in a location where previously we’d seen around 13 Mbps down and up to 17 Mbps up, that jumped to over 42 Mbps down and over 22 Mbps up.

Moving round, though, we found things to be more changeable. 42 Mbps – higher, to be fair, than EE suggests – was the fastest we saw, while the fastest upload was just over 29 Mbps. More common, though, was a download in the low- to mid-20s and uploads around 20 to 22 Mbps.

What makes it somewhat frustrating, however, is the difficulty in actually pinning down DoubleSpeed service. Since there’s no change to the indicator – you don’t get “4G+” in the display or anything – it’s hard to know what you can expect. Meanwhile, the actual speeds we saw often proved unconnected to the strength of the connection on the signal meter: our fastest benchmarks actually came when we had just one bar showing.

Nonetheless, it’s an impressive turn of speed overall (when you’re in the right place) and the fact that EE won’t be charging extra for it is welcome. The DoubleSpeed 4G goes live today; if you’re in one of the served areas, run a speedtest and let us know how you get on in the comments below. We’ll be adding to our results with more as we test the network in other locations.