EE‘s 4G LTE network is already live, and so we grabbed some hands-on time to see just how quickly the new breed of 4G handsets set to hit the UK can run. The numbers – on what’s an unstressed network, it’s worth remembering – are certainly impressive, with download rates in excess of 34Mbps and uploads of over 22Mbps at times.

The more usual rates we saw were in the 26-30Mbps download range, here in London, while uploads generally hovered in the range of 12-13Mbps. Peak bursts improved those numbers considerably, while ping times hovered around the 60-70ms mark. 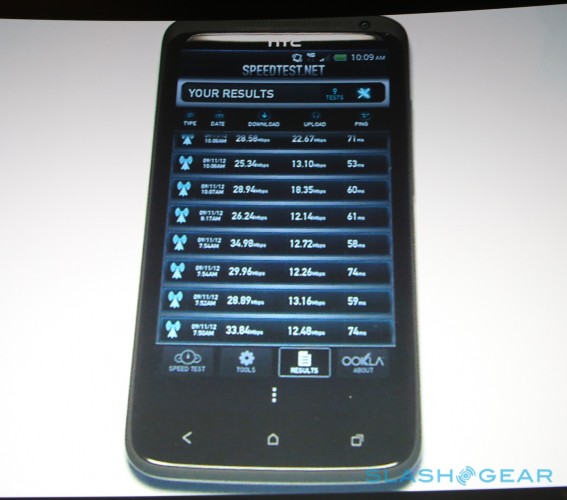 Of course, it’s easy to see ridiculously high speeds when there’s hardly anyone else using the network; we saw similarly eye-watering figures from Verizon’s initial benchmarking in the US. That settled into somewhat less incredible numbers eventually, though still well in excess of what 3G could deliver.

EE is talking about LTE speeds around 4-5x what the current 3G network offers, which is still a considerable improvement, though we’ll need to wait until the roll-out begins in the tail-end of 2012 to see how it holds up in practice. The first four cities go live from today, broadening to sixteen cities by the end of the year.