Wirelessly-connected scales aren’t new, with Withings’ model gleefully telling everyone in your social networks just how fat you are for some time now, but Drop aims to do something similar only before the food actually makes it past your lips. The Drop connected kitchen scale claims to take the measuring confusion out of baking, integrating with a companion iPad app that not only shows recipes but gives real-time guidance on how you piece it all together, even automatically adjusting the overall recipe if you’re short on an ingredient.

Inside the red-topped scale is a Bluetooth LE radio, which pairs up with your iPad and feeds weight stats to the app. It’s accurate to less than a gram, or can conversely handle up to 6kg loads.

The silicone rubber top can handle a pot of boiling water being placed on it, and the replaceable battery is apparently good for up to a year.

What makes Drop special is its flexibility. Whereas if you only have two-thirds of the flour your muffin recipe demands, you’d normally have to do all the sums for adjusting the rest of the ingredients yourself, Drop can shuffle the figures instantly. 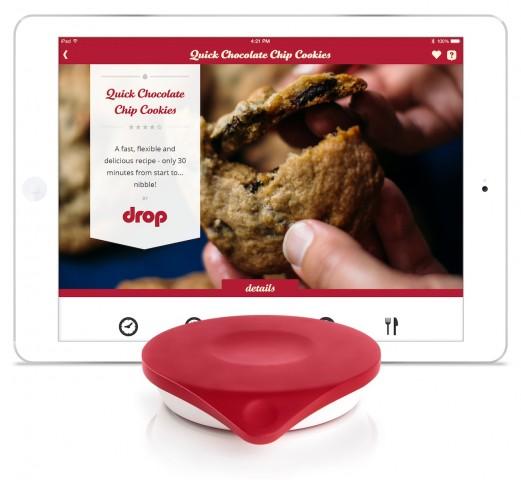 The app comes with a database of recipes, or can simply be used to show regular weights if you have a preferred recipe of your own; eventually, Drop aims to add recipe uploading support, so you’ll be able to add your specialties to its catalog. A capacitive touch button on the front steps through each stage of the recipe, rather than getting the tablet’s screen smudged with sticky fingers.

Unfortunately, there’s no standalone use. Unlike a regular scale, Drop doesn’t have an integrated display of its own: if you want to use it, you need your iPad nearby.

Initially you’ll need to have an iPad 3rd generation or higher running iOS 8 in order to use Drop, though the company says it’s working on an iPhone app which it hopes to release soon. Similarly, an Android app is in the pipeline too.

Keen cooks might not need the hand-holding Drop offers, but if you’ve always wanted to get a muffin going in the kitchen but didn’t know where to start, for $99.95 it could be a neat addition to your increasingly smart home. Let’s just hope it doesn’t strike up a conversation with the Withings scale and reveal quite how much butter you’re adding.