Driving this electric Honda was more fun than the new NSX

You know something is up when a Honda engineer giggles while he’s talking to you about his car. Turns out, the Honda “4-Motor Electric SH-AWD with Precision All-Wheel Steer” prototype – a clunky name for a heavily modified CR-Z – is enough to cut through the usual restrained enthusiasm of Honda Japan’s handling experts, and turn them into squeaking fanboys. Then I drove it myself, and instantly understood why.

Step back to late 2012. A team of Honda engineers and students decided to explore the possibilities of next-generation torque vectoring, building on Honda and Acura’s existing expertise in all-wheel drive, and come up with an EV sports car. 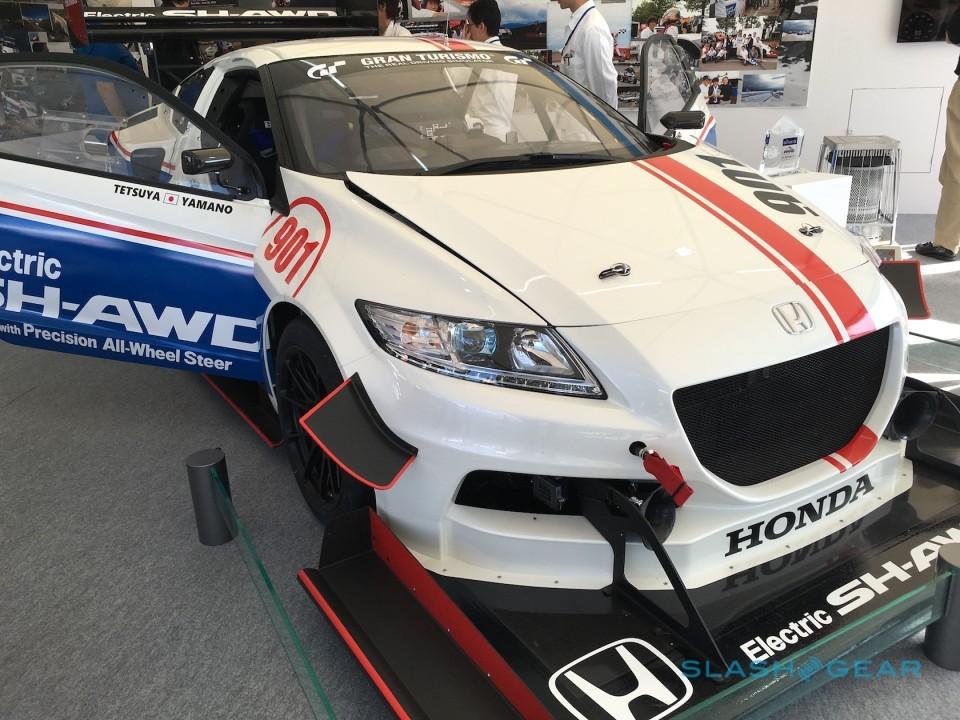 Since it’s always more fun to make something with a practical application than just a concept, the team settled on the infamous Pikes Peak International Hill Climb. Held every year in Colorado, USA, its 12.42 mile course isn’t especially long, but it climbs dramatically, rising 4,720 feet with grades that average 7.2-percent.

That takes a special kind of car to succeed in, but the Honda team thought they had the answer.

Out went the CR-Z’s usual 1.5L hybrid gas engine, and in came four electric motors, one for each wheel. Since each motor can be independently controlled, the torque going to each wheel – and in either direction – can be adjusted individually. 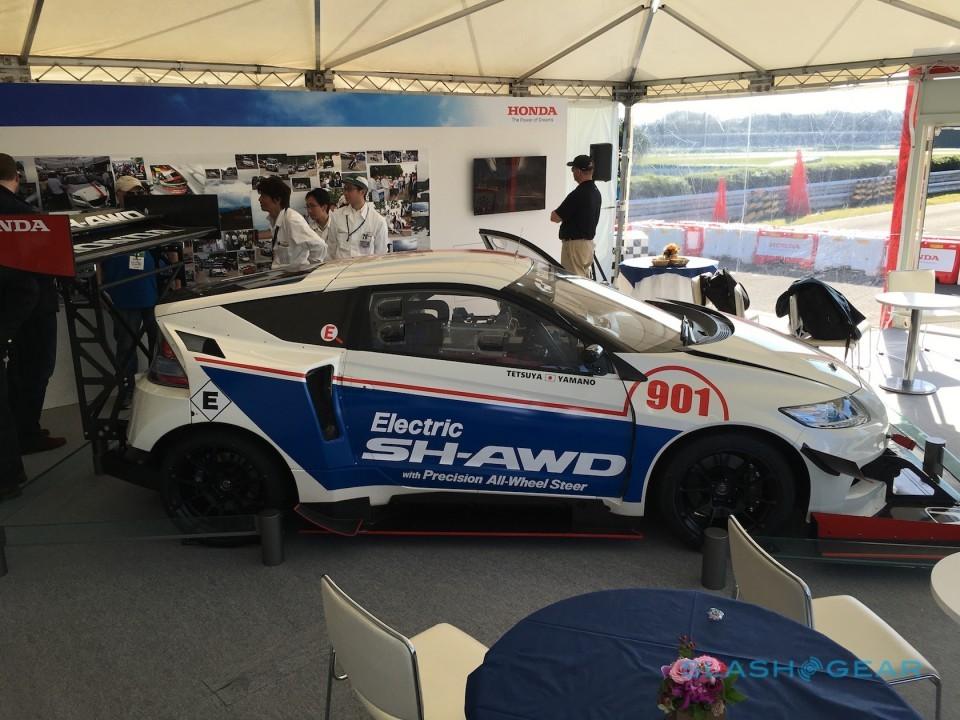 If one wheel is lacking in grip, the car can throw more power to the others. On tighter turns, meanwhile, the outside wheel can get maximum torque while its counterpart on the inside gets opposite torque, helping pivot the car around.

The skunkworks group didn’t stop there, however. The prototype also got all-wheel steering, with the rear wheels having two degrees of steering for tighter cornering. 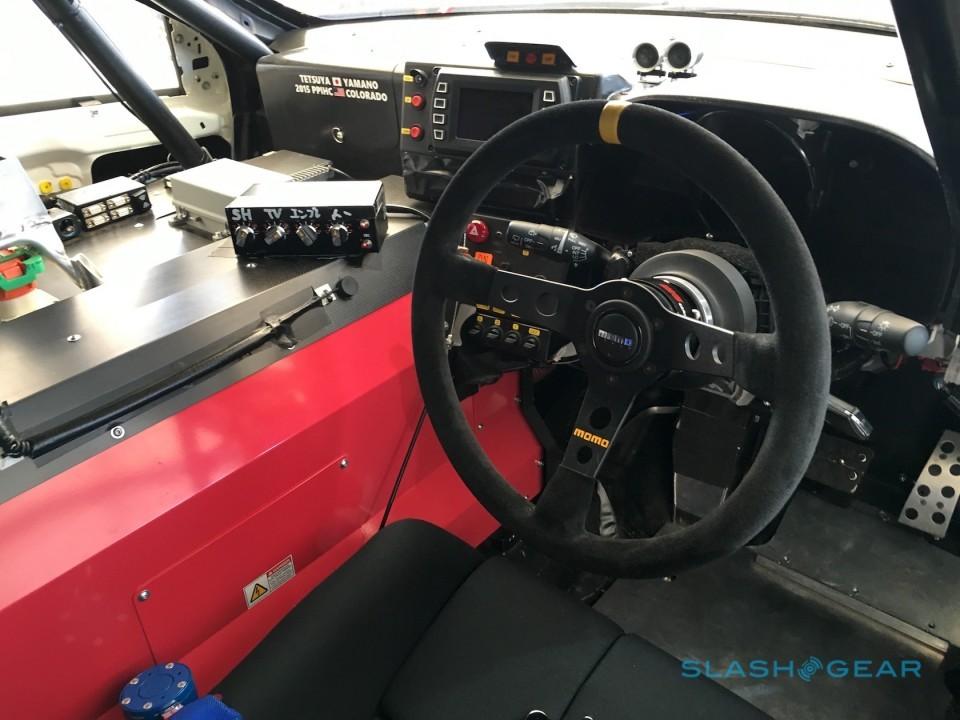 Hopes were high for the Pikes Peak challenge in June earlier this year, but even the Honda engineers were surprised at the result. With Super GT driver Tetsuya Yamano at the wheel, the electric prototype CR-Z took top place in its Exhibition class, completing all 156 turns in 10:23.829.

In fact, it finished in eleventh place across all classes, despite having a fraction of the horsepower those in the top ten could boast. 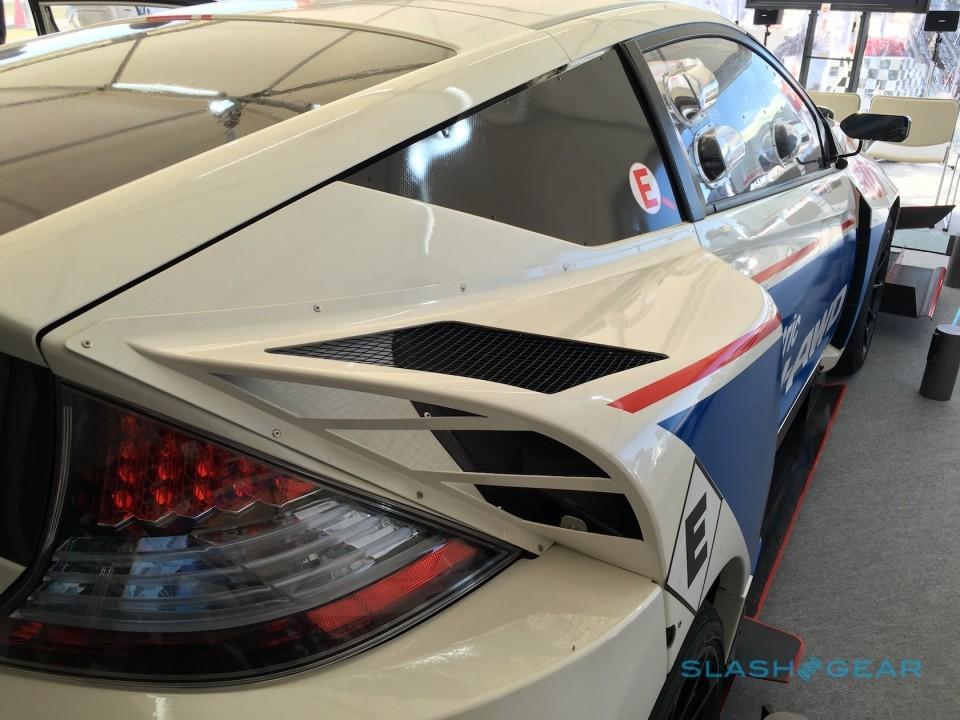 While Honda had brought out the International Hill Climb car for me to gawp at, it would only trust me with a lap behind the wheel of the 2014 prototype – with only around half its power, too – when I caught up with the engineers responsible at the Honda R&D Center in Tochigi.

Inside, the CR-Z’s usual cabin has been heavily modified for the new electric powertrain, with closely-hugging bucket seats and an oddly nipple-like toggle switch to choose between Drive and Reverse. 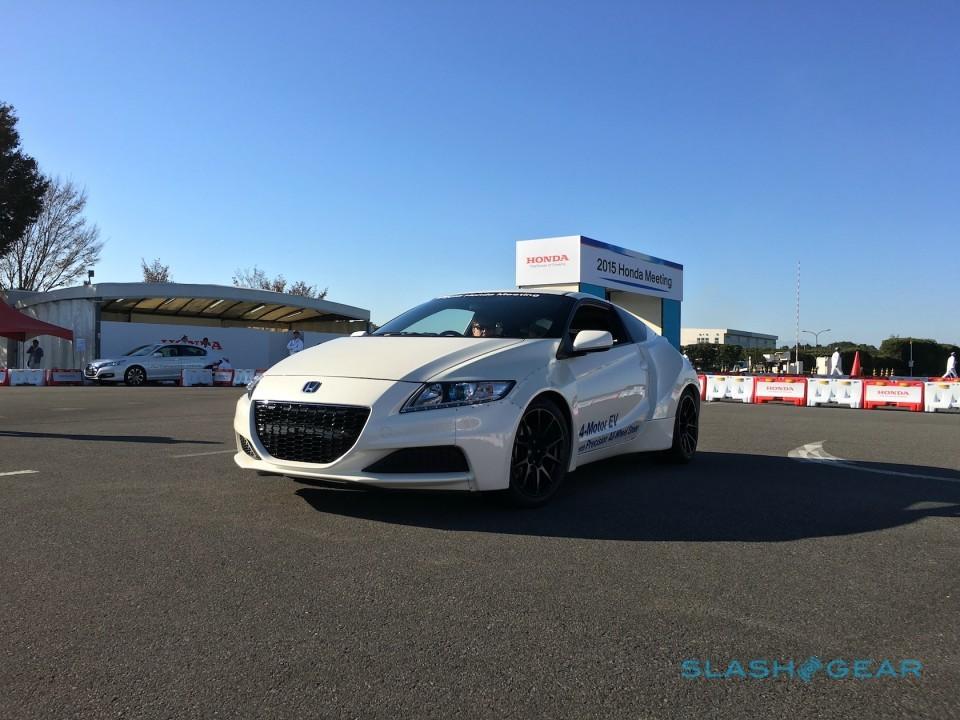 “Floor it,” the engineer in the passenger’s seat told me, grinning broadly. Always the accommodating guest, I obeyed, and the little EV surged away as the four motors dug in.

Instant torque is a well-known trick electric cars use to wow you off the starting line. The real magic comes when you hit the first corner.

Honda’s course was hardly complicated, though the safety talk had been clear to label the first corner as suitable for “moderate” speed. “Go faster,” my co-pilot insisted, and I obliged, expecting understeer to appear. 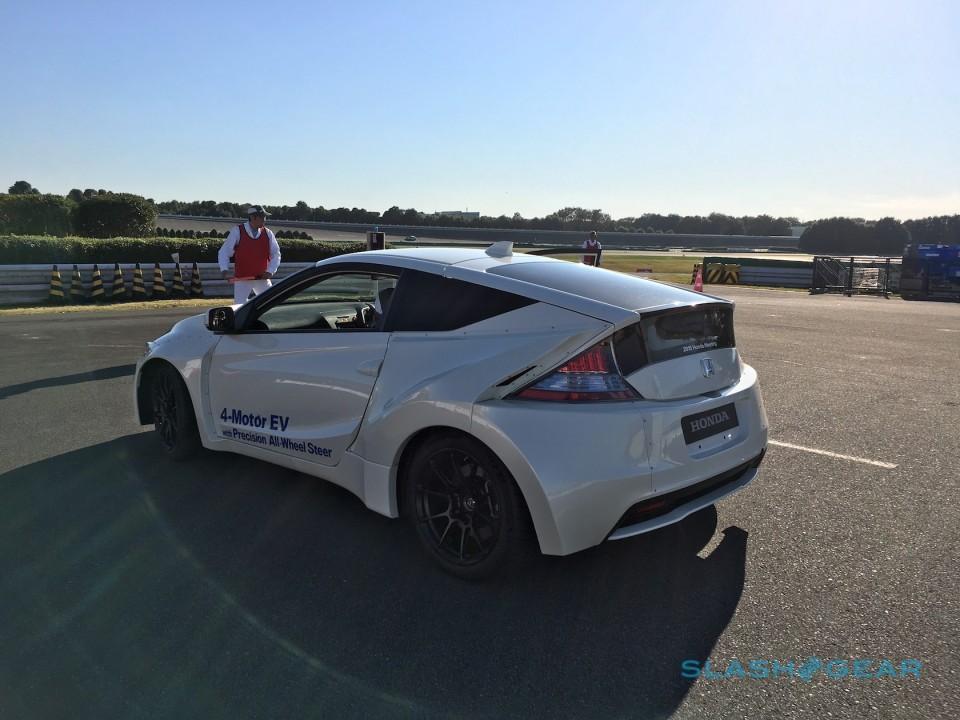 As hoary old driving clichés go, I’ve always thought “it corners like it’s on rails” is one of the lamest. So, you’ll have to believe me when I say how astonished I was to find the Electric SH-AWD prototype does exactly that.

Turn the wheel and it goes in the direction you were aiming for. Turn the wheel and stomp on the accelerator some more and, rather than going whooshing off the edge of the track, the CR-Z just pivots. We’re talking prodigious, cackle-inducing levels of grip. 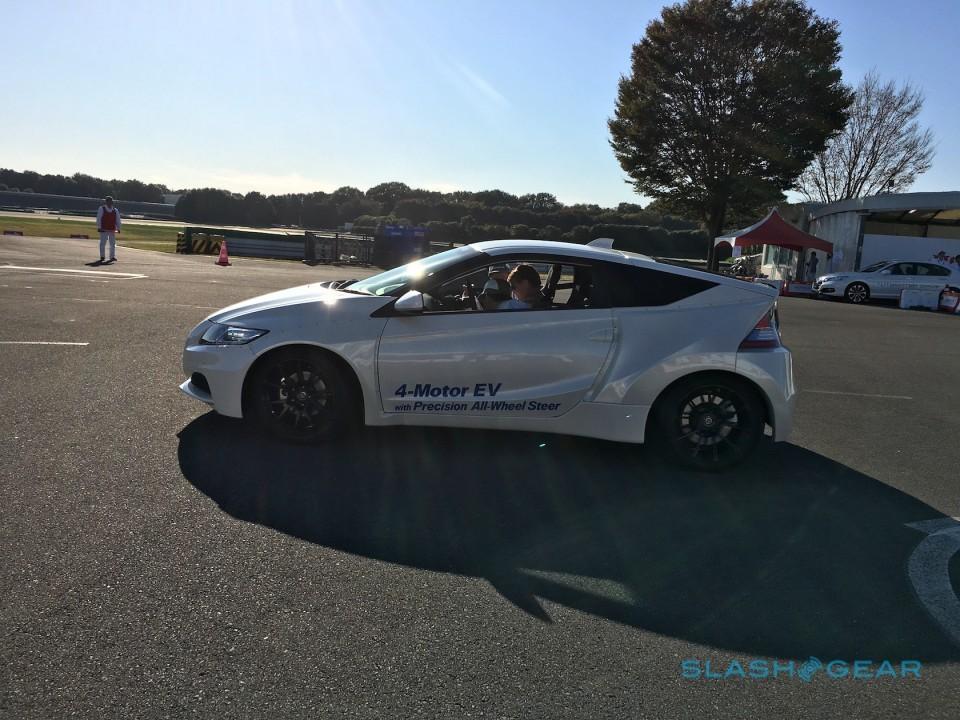 I’ve driven cars with incredible traction before, but even so the prototype can be a little disconcerting when the rear steering kicks in and the back end twists around. Not to the point where I lifted my right foot, mind – in fact I’m mentally kicking myself now for not pushing it even harder, but some mental preservation is ganglial and takes time to overcome – but enough to make it unlike just about anything else I’ve tried.

All too soon the course was over and, despite my promises of an exciting new life in America just as long as he didn’t kick up a fuss when I drove the prototype straight out of the R&D center and to the nearest cargo ship facing the right way across the Pacific, my new engineering friend refused to turn a blind eye to my sudden kleptomaniac inclinations. 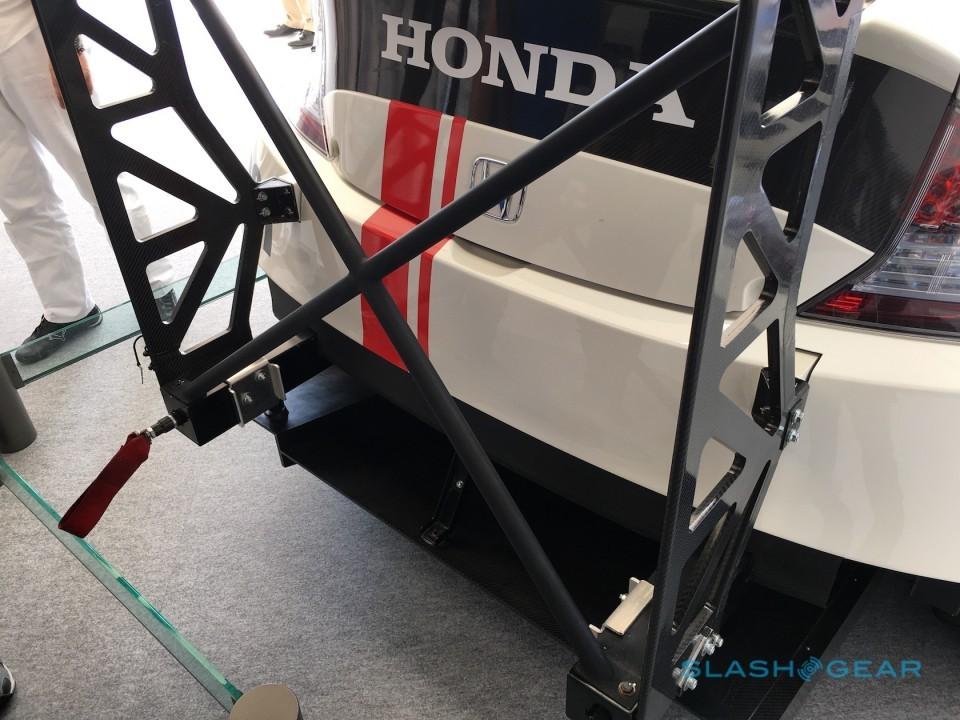 When, I demanded of Honda as soon as I was dragged from the cosy grip of the Alcantara, can I buy one myself? The answer is no less disappointing for how predictable it is: right now the company is still studying it, and there are no plans for production.

And yet, there’s a faint glimmer of hope. Every engineer who has tried the prototype, one Honda employee confided in me, has walked away loudly praising its mechanical marvelousness.

That’s critical, since Honda puts a whole lot of importance on what its engineers think. “I am an engineer,” Takahiro Hachigo, President, CEO, and Representative Director of Honda, told us later as he opened a rare Q&A session at the facility. “I myself love to drive cars.” 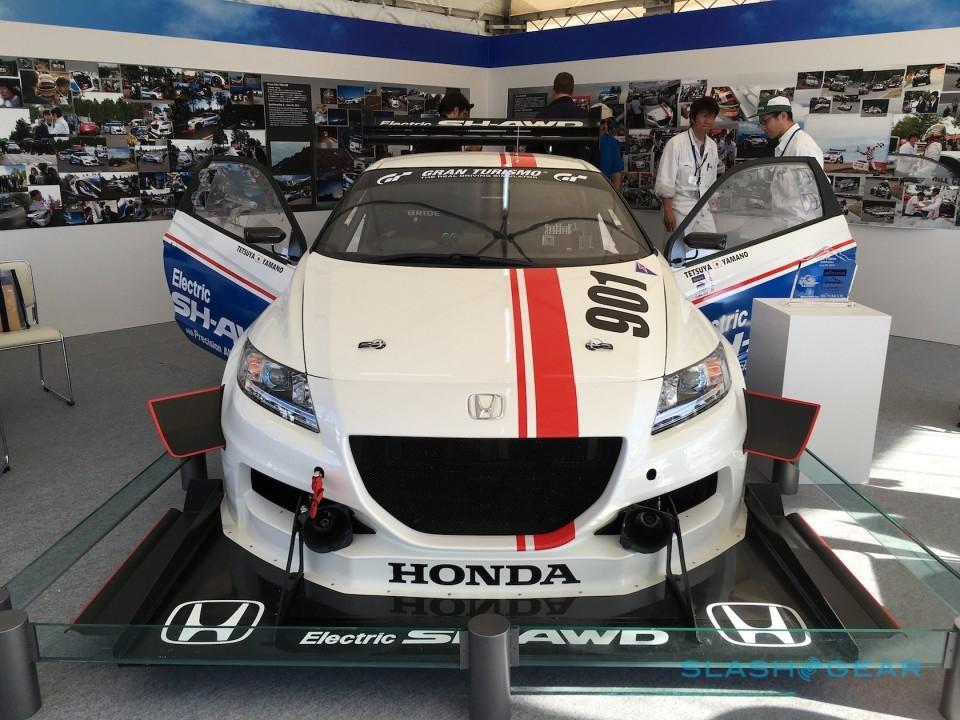 “That was a demonstration of what we believe when we say “bringing fun to our cars”,” Hachigo explained when asked about potential production for the prototype. “In that case, it’s not that we have plans to commercialize what you saw today … it’s not in a stage whatsoever for us to develop and produce a car like that.”

I hear that, and then I look at the 2017 Acura NSX I also drove this week – the three-motor system with front wheel torque-vectoring of which is a clear early version of the four motors in the CR-Z prototype – and think about how it took Honda just two years to change its supercar plans and cook up the hybrid drivetrain. 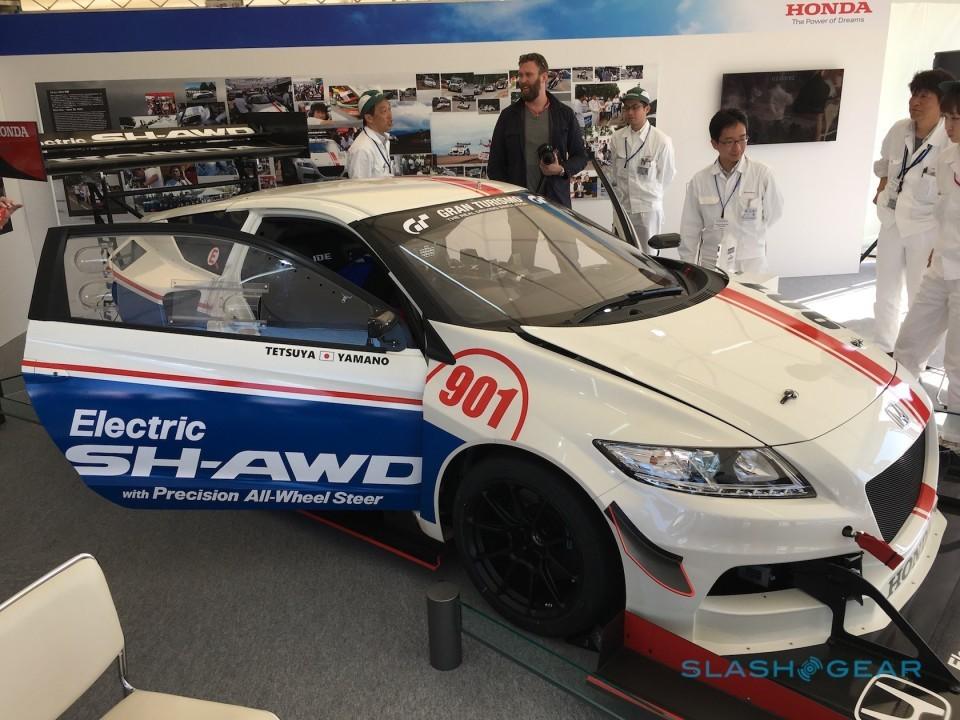 Even more intriguing, while the new NSX is set to cost more than $150k when it goes on sale next year, a four-motor system might be a lot more affordable. Four moderately powered motors could be much cheaper than one large one, not to mention simplify the parts bin because all would be identical, and have applications not only in sporting models but off-roaders and sure-footed luxury sedans.

If that’s not something which you can imagine easily appealing to common-sense Honda as it mulls production, I’m not sure what is.