A new digital assistant has arrived in town, and she’s looking to steal Siri’s job. Her new name is Sherpa and she just arrived to North America today. Right now, she’s only offering her services to Android users, but eventually, she’ll be aiding Apple’s iPhone users as well. You will be able to use her on both your phone and your tablet. After testing out her services, she’s actually much more useful than I expected.

Sherpa is one of the top Android apps in Spain and Latin America, and with good reason. She has some comical aspects, though not nearly as much as Siri. When first launching her, she will say something along the lines of “I love waking up to you yelling in my ear”. You can use Sherpa to navigate, search and play music for you, search up definitions and articles about a subject, read out your text messages, or any messages, and even transfer money through PayPal. 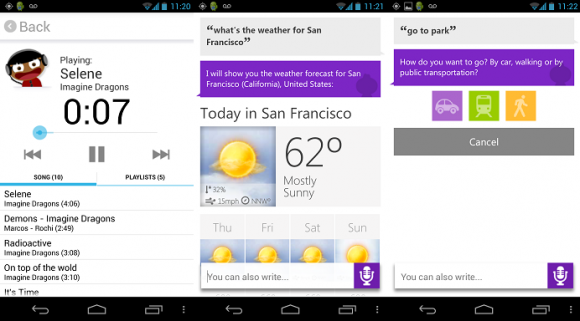 While using the app, I was pleasantly surprised by how accurate her reception of my commands were. I usually have problems with Google Voice Search horribly misinterpreting my messages, but Sherpa grasped all of my commands correctly. There are some caveats with Sherpa however. Some things she has difficulties searching up, so she will search up something related to what you want. For example, I asked her what she thought of Siri, and while she interpreted my command correctly, she proceeded to look up SiriusXM Radio.

This digital assistant is very pleasant to use. Thanks to Sherpa’s partnership with a European company with the rights to 4 million songs, Sherpa will be able to find and play most of the songs that you request. Sherpa also has many partnerships with other companies, like PayPal, Themoviedb.org, Lastminute.com, Wikipedia, and LinkedIn, expanding her abundance of features. She is bilingual, so you can speak to her in both Spanish and English. According to Xabier Uribe Etxebarria, who created Sherpa, she will learn over time, meaning the longer you use her, the more she’ll get better at interpreting what you want. Go ahead and try Sherpa out by downloading her app through the Google Play link below.