Yankees and Red Sox. Edison and Tesla. Dell and HP. Both American PC titans have release shiny new ultrabooks this year, hoping to find a small place in your carry-on bag. The Dell XPS 13 Ultrabook is a few weeks newer, but not so much newer that the HP Folio 13 is out of the running: both are slim, stylish notebooks with 13-inch screens, Intel Core processors, SSD drives and the latest version of Windows. So which between the two of them should get your hard-earned dollar? Let’s break it down.

Both the XPS and the Folio fit well into the ultrabook category: super portable with plenty of processing power, but a little light on storage, ports and graphical oomph. The Folio’s base package has a Core i5 processor, 4GB of RAM as its only option, while the XPS stars at an i5 and offers an i7 for a much higher price (though it also tops out at 4GB of RAM). The Folio is currently only offered with a 128GB SSD drive, while the XPS can be bumped up to 128GB. For all that, the folio is $100 cheaper at the starting price of $899.

As far as the body goes, both notebooks are head and shoulders above standard laptops when it comes to style and portability. That said, the XPS takes it to the next level: it’s noticeably smaller and lighter, though not so much that it’s a dealbreaker, and the carbon fiber bottom panel is a stunner. By comparison, the Folio only has soft -touch plastic underneath its brushed aluminum top. The extra size gives the Folio some extra flexibility, though: both laptops have one USB 2.0 and one USB 3.0 port, but the Folio adds Ethernet and a full-sized SD card slot. The latter is an important factor, at least for me. The XPS uses  DisplayPort as its sole video-out, while the Folio has the more universally-accepted HDMI.

Both laptops have identical screen sizes (13 inches) and resolutions (1366×768). That’s a little small for power users, but understandable given the price and size. Just because they’re similar doesn’t mean they’re equal: the Folio’s LCD panel is noticeably dim, which is a shame when it sits next to the XPS’ vibrant display. The tiny and stylish bezel on the XPS only adds to its wow factor. There’s just no contest here: if you’ve got to have a quality screen, the XPS is the way to go. 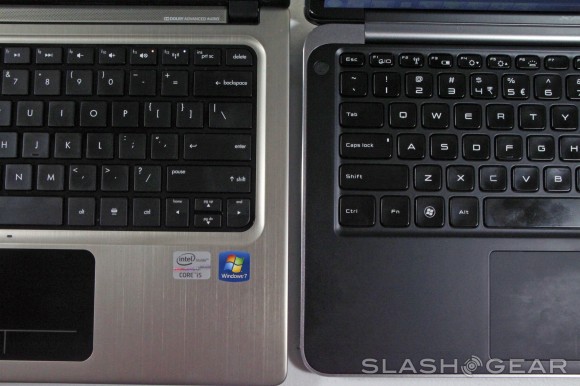 For the keyboard and trackpad, the positions are more or less reversed. The XPS has a fidgety trackpad (though the recent update helped) and a somewhat mushy keyboard. By comparison the Folio’s trackpad is more responsive, and its chicklet keyboard is stiffer with considerably less flex in both the deck and the individual keys. Neither are best in class, and the XPS isn’t o bad that you should discount it entirely, but the Folio is the clear winner for inputs.

Both Dell and HP have a bad habit of loading up their machines with trialware and other things you really don’t need. The XPS and Folio are roughly equal in this category, with the standard Microsoft Office/Bing, antivirus, et cetera. But I’m giving the edge to the XPS, just because HP includes its own movie store and other unwanted add-ons to Windows that Dell lacks. Both run Windows 7 just fine, and their performance and capabilities are similar enough that it shouldn’t be a factor in your decision, especially if you’re someone who installs a clean OS on your machine every time.

No contest here: the Folio 13 gets an impressive 8-9 hours on a single charge with regular use, while the XPS 13 got between 5.5 and 6 hours on a similar load. The negligible extra size and weight of the Folio are a clear advantage here, and while the XPS’ tapering body (and integrated battery meter) are nice, there’s just no way to make up for the time difference. Both batteries are integrated and can’t be swapped, so if you’re a regular long-haul traveler, the Folio is your friend. 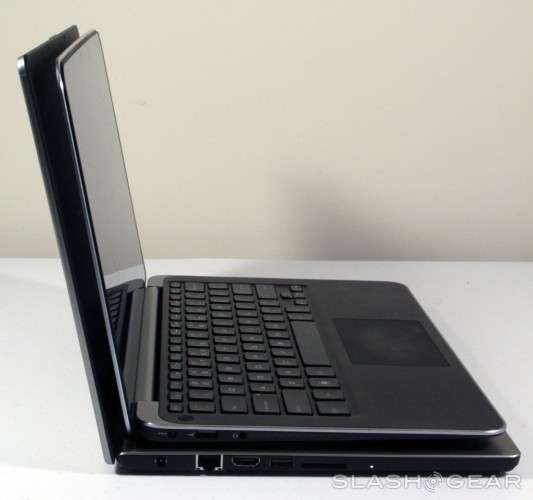 Once again, the Folio scores an easy victory. At $100 less than the Dell (similarly configured) the HP gets well below the $1000 mark that Intel had in mind when it established the ultrabook standard. With specs that are essentially identical to the XPS at that level, more ports and greater battery life, the frugal customer has to go with HP between the two. The Folio has fewer options for upgrades, but the XPS gets so expensive so quickly ($1500 for an i7 and a 256GB SSD drive) I doubt very many will consider it.

Decision time: which of the two would I place my money on? Both have their strengths and weaknesses. I could stare at the XPS 13 Ultrabook’s screen and svelte frame all day, especially after taking a look at the more buttoned-down Folio 13. It’s also lighter, thinner and smaller. But the Folio wins out, due to better battery life, an SD card slot and HDMI out, a better keyboard/trackpad combo, and a lower price. That’s enough to make me see past the poor screen and partial plastic construction. If you’ve just got to have a great screen and a stylish-looking laptop, go for the Dell. 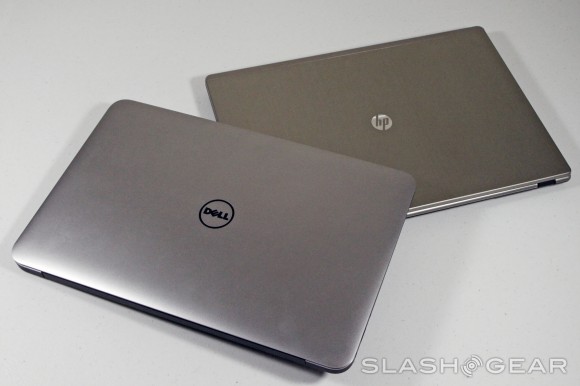 If you’re still on the fence, be sure to check out our HP Folio 13 and Dell XPS 13 Ultrabook reviews. If you’re considering one of the more expensive builds of the XPS, take a gander at the HP Envy 14 Spectre, which goes for a few hundred dollars more. 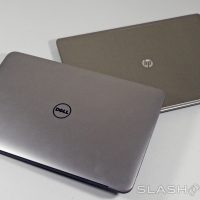 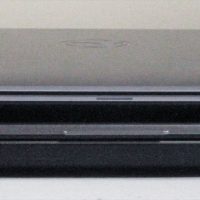 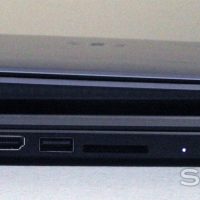 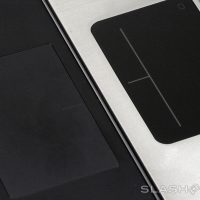 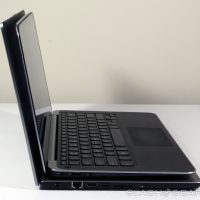 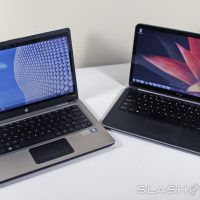 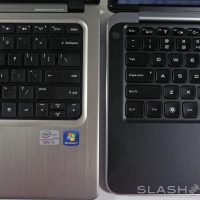 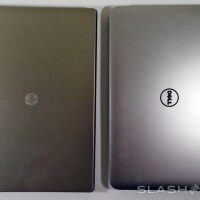 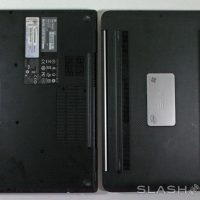